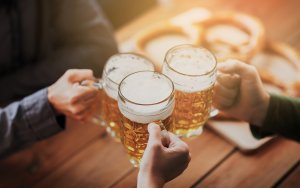 If I had a dollar for every minute that I spent struggling with the concept that I am powerless I would be able to buy enough power to supply the world with electricity for a year. Step one of the 12 steps explicitly states:

“We admitted we were powerless—that our lives had become unmanageable.”

How then could a man such as myself, a firefighter no less, live with the thought that something out there was more powerful than myself? It was unfathomable. My refusal to admit that I was anything but invincible  kept me from achieving that which ultimately gave me the very power I was afraid to relinquish; sobriety

Crazy indeed. The active alcoholic-addict is exactly that.

It took a lot of people with a lot of strength, experience and wisdom to get through my thick skull. Once they were able to penetrate my personal wall of resistance everything started to come together. I developed coping strategies that are very personal, yet based on universal truths. I hate being powerless. Being intoxicated renders me a little helpless, which is, in effect, powerless.

“To achieve sobriety, one must admit they are powerless.

I am not powerless, therefore, I shall never achieve sobriety.

By maintaining sobriety, I have taken control of my life.

Therefore, I am not powerless!”

This bit of brilliant observation was not told to me, or taught to me. It is not in any literature I have found that deals with addiction. It may or may not be an effective thought process for other alcoholics or addicts. I made this one up all by myself with the help of those who came before me, or those who have learned how best to help people like me thrive. By opening myself up, and learning to trust and listen I was able to reason my way through thought processes formed by addiction. During an addicted person’s active period thinking is compromised, rational thought is replaced with grandiose ideas and the chance of returning to who we were prior to our addiction begins to shrink away. We become the substance we crave, and develop strategies known only to us to maintain that which is destroying us.

Our addictions are clever, crafty, manipulative and relentless manifestations of the worst parts of ourselves.

When allowed to fester they grow in strength and take on unearned importance in our thoughts and actions. They are hungry, and feeding them becomes easier than fighting them. Before long, we are indeed powerless over them. Some of us never realize that the true power resides in every alcoholic and addict who allows the idea of sobriety to seep in.

Nobody knows exactly why an individual chooses to refuse to start their war against addiction. And nobody knows exactly why an individual surrenders and starts to fight. I certainly don’t know what makes others tick, but I do know this: within each and every one of us exists the power to take control of our thought process, and to realize that we can live our lives without the added weight of the things that promised us peace and tranquility, but delivered pain and chaos instead.