Shots were fired into a crowd on Westminster Street in the West End, just past midnight. Ah, the city of Providence. One person was shot, a hole in his hand and another in his thigh, near a femoral artery. The wounded leg grows as the seconds tick blowing up to twice its normal size.

I look him in the eye and tell him we’re doing everything we can. It’s the truth. I open the ringers to full flow while my partner sinks the huge 16-gauge in his other arm. The guy’s not speaking at all now… 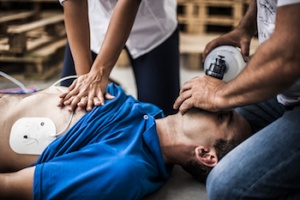 “He went to the bathroom and didn’t come out.” When we arrived, he was Code 99. Gone. CPR is started; IVs going; one, two, three defibrillations; tied to a trauma board; carried down two flights of stairs and out of a million-dollar home on the East Side.

“He’ll be okay, won’t he?” asks the man’s wife as we rush into the night and the waiting ambulance.

“We’re doing all we can,” I tell her. “Call somebody and meet us at the hospital. Please don’t drive.”

Their car crossed the line, sideswiped another car, crossed two lanes of traffic, and crashed into a utility pole – one of the wooden ones; they don’t give. The car was demolished; the three kids whose night came to a sudden end were critical. More rescues were called for, the most critical of the group extracted first. She’s the driver, she appears intoxicated, and she is worried about her friends.

“Are they okay? Will they be okay?” she repeats herself over and over as we restrain and immobilize her, put her on the stretcher, then put the 02 mask over her face. Her questions are muffled now but the same. “Will they be okay?”

She’s on the couch in her modest home in the North End; it’s a nice house, well kept, pictures of little girls on the mantle, schoolwork on the fridge. Her face is swollen, her arms bruised.

She doesn’t want to go to the hospital. We bandage her up, wait for the police, offer our condolences, and leave. Her boyfriend is under arrest. She asks, “Is he okay?”…

The group home calls. It’s a respectable place on the South Side, usually no trouble there. One of the residents didn’t wake up. He’s sitting in a recliner, TV on, eyes open, syringe and spoon on a little table next to him, near the TV Guide.

“Is he okay?” asks the group home manager.

I know, vaguely, that she had something going on last night and got to bed late; I try not to wake her. I slip under the covers, put my arm around her, and close my eyes. Home at last.

How was your night?” she asks, before returning to sleep.

Blackness. I call it sleep of the dead.

I wake up early afternoon; she’s been awake for hours, like a normal person. She’s busy, doing the things that normal people do, laundry, prepping food for the night, both for me, and for her.

As I listen to her busyness I think, “It might even be time to get back to work.” Sometimes I wonder which is harder, leaving home or staying in it. At least I have some excitement to look forward to, even if it comes with a price.

We’ll be separated again soon, me back to the city, her, alone. Again. She gets to await my coming home, only I never return the same way I left, and every shift brings me a step farther from giving her the truth to “how was your night?”

When I’m with her, I feel I’ve earned the luxury of lying – I used up all my honesty with people in trauma or dying. Maybe I’m afraid I’ll have to report that the person she married is dead. At home, all my behavior signals, Don’t ask. I can’t save everyone.

In response to such thoughts, I add drinking to the mix. The drink doesn’t ask how my night went. But it makes me wonder, will she abandon me? Will she continue to sleep alone in the bed we once shared? Will she tolerate my silence? My drinking?

Sometimes things are far from okay.

American Addiction Centers’ commitment to first responders begins with a free, confidential, 24/7 helpline. By calling the helpline, you can access a veteran responder in recovery for any questions about substance abuse and the service. Call (888) 972-2704 for Law Enforcement or (888) 731.FIRE (3473) for Firefighters.

American Addiction Centers also offers a first responder treatment program with a unique curriculum developed by and for first responders in partnership with the Fraternal Order of Police, the International Conference of Police Chaplains, and the National Volunteer Fire Council. The program helps first responders develop a set of recovery tools, so they can revitalize distanced relationships and work family and friends into their support system for recovery.