One of my biggest surprises when I joined the fire service, or “Brotherhood” if you choose, was the distinct differences in the personalities of the people bonded by our choice to be firefighters.

Prior to the start of my career I believed what had been presented to me; firefighters were a tightly knit community who fought fire together, drank together and did everything together. Only part of what I believed was true, firefighters did fight fire together. Lots of them did drink together; however, many of them didn’t drink at all. Lots went home to their families after their tour and were not heard from until the next one. Lots spent time together on their days off, and went to bars, and had parties and outings and lived hard. There were also loners, philosophers, perpetual students, runners, weightlifters, writers and entrepreneurs. The Fire Service was exactly like the rest of the world I knew, different kinds of people working together to make things better.
Of course, being actively alcoholic when I was hired I gravitated to the drinkers. I conveniently overlooked the people who were not part of my crowd. I simply refused to accept that anything other than what I had been led to believe could possibly be anything worth pursuing. I wanted to be part of the group more than I wanted to be true to myself.

Alcoholics believe that our lives will be over as soon as we drop out of the party. Our minds have been programmed to believe that it is perfectly acceptable, and even preferable that we join the rest of the world in celebratory behavior which of course centers on inebriation. We don’t want to let everybody down by not joining them for a drink, smoke or whatever they are into. We truly believe that everybody else actually notices whether or not we are participating in their celebrations.
Some people actually do notice whether or not we are drinking with them. Some of those people take it a step further and insist we join them, and will not take no for an answer. Those are the people we need to avoid when we begin our life of sobriety. Those are the people we could consider in need of help themselves. Healthy people do not judge a person’s lifestyle choices; they do not need to validate their behavior by seeing it in others.

It is truly horrifying to accept the possibility that we will have to abandon the pack when we begin our new lives. The peace and comfort we find by belonging to a community of like minded people has the same power keeping us from getting well as it does help us maintain sobriety. It all boils down to the company we choose to keep. It can be more preferable to continue jeopardizing our health, happiness and future than it is to face the unknown. For far too many, the decision to find serenity is made by somebody else, often a spouse, sometimes an employer, sometimes even the courts. Stepping out of a comfortable existence; even one that brings with it chaos, legal problems and troubled relationships takes strength of conviction, the question is, where does one find that strength while in the throes of addiction?

The weight of the world was lifted from my shoulders when I found the answer:

“The person who cares the most about what you drink, and how much is you.” 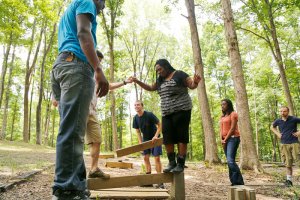 The world is full of interesting people. The fire department is full of people who don’t drink to excess, or even don’t drink at all. All I had to do was open my eyes to the possibility that my world view might not have been completely accurate. My need to be part of the group never limited me to the group of less resistance. The heavy drinkers would still drink without me joining them, and wouldn’t give it a second thought. I was still part of the overall picture, and still belonged, though in a different way.
I found myself when I found sobriety. I didn’t have to lose my friends, or even my place in the group. I found my place right there among them. Best of all, once I shed the weight of my addictions, I was able to do so on my own terms, and that continues to feel better than anything I ever introduced to my system.