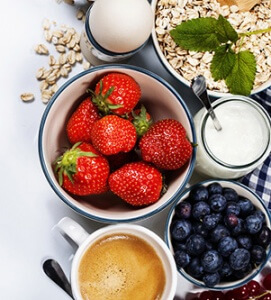 Funny thing happened on the way to sobriety: I started to pay attention to what I ate. While an active drinker (what we recovery people politely call “drinking alcohol like pigs” – no offense to the pigs), I only had two states of being: drunk and hung over. No matter what I put into my body for nutrition, it wouldn’t make me feel any better or worse.

When I first took alcohol out of my system I developed an overwhelming desire for ice cream. I succumbed to those cravings, some days eating a half gallon of whatever flavor appealed to me. I thought that I was simply filling an emotional need for something decadent, only to find out later that what I was actually doing was replacing the sugar that I lost when I stopped ingesting a gallon of liquor a day with the sugar in a good old fashioned readily available frozen treat!

Eventually my self-respect returned, and as any self-respecting cheapskate will attest, the thought of replacing my wardrobe with extra large versions of clothes I already had was unacceptable. The ice cream had to go.

But what could I replace that with?

No, no, and no! I needed to match my newly developing mental clarity with a newly developed body. The old body had suffered immensely during my twenty-five year run of self-abuse through substances. The thought of returning myself to the fit person that I was born to be was intriguing, if not a bit overwhelming. I loved burgers and fries. Loved chips and dips, and especially nachos. I could eat salads, as long as they were covered with blue cheese dressing and topped with a box of croutons.
Sure, I ate at home, and enjoyed the grilled salmon, green smoothies, lean meat and fresh vegetables, my wife prepared. She followed a strict, healthy regimen that formed a kind of food gospel, and it had achieved great results. But my newly sober self looked at the strict diet like this: survive the healthy diet until I return to work. Then resume my manly and demented diet among firehouse people who got it – because they ate what I did, as much as I did, as often as I did, with no regrets.

What else was a respectably pudgy and newly sober firefighter to do?
The first part of the answer I craved was simple. The food I needed to maintain health, energy, and vitality continued to be right in front of me. I simply neglected to take advantage of it: Follow the food gospel according to my wife.

The second problem was more difficult. I loved to eat what I loved to eat. I loved it so much that I had designated myself the Firehouse Chef, acquiring a reputation as one of the best cooks in the department by making tasty, filling meals with no worries about side effects. Most of the firefighters enjoyed what I made, and the more decadent the ingredients, the easier it was to keep everybody happy. Problem was, I wanted to feel as good as I could, and heavy cream, pasta, and burgers didn’t cut it.

But how to change things up, introduce food that would nourish my recovering body and the stressed bodies of my team mates in the firehouse – and still keep my reputation for great cooking? That solution is a little trickier; basically it calls for stealth health.

I have many tried and tested tricks up my sleeve, but in hopes of expanding my repertoire, I called nutritionist Kayla Little to compare notes. Kayla is known for her ability to make substitutions and to solve prickly problems that come from poor nutritional habits. The highlights from our conversation are coming up.