How Cocaine Affects the Body

Cocaine is a powerful stimulant derived from the cocoa plant, which is found in the Andes region of South America and is used in other forms for coffee and other caffeinated products.

Based on the chemical process that cocaine undergoes, it can be produced in powdered form, which can be snorted and if dissolved with water, injected directly into the body. Another was that cocaine is created is a method that leave it in freebase form, which then allows the drug to be smoked. 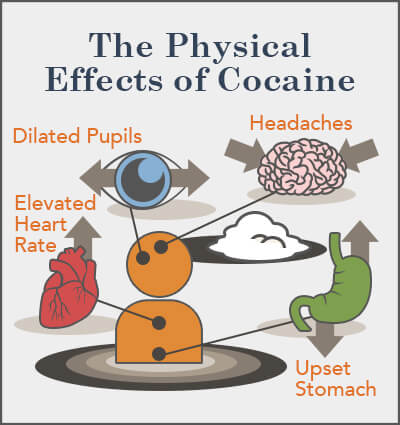 Yet what are the distinct ways in which cocaine use can manifest all over the body? By learning more about the following four physical effects of the drug, individuals with a loved one struggling with cocaine addiction can better understand why entering into a drug rehab facility is so important.

How Cocaine Affects the Body

When an individual has been snorting, shooting or smoking cocaine, it can immediately create changes in the body. One of the most distinctive signs of cocaine use are dilated pupils.

Cocaine can increase one’s heart rate, making it speed up as the organ works overtime to adjust to the impact of the drug. In addition, the demand for myocardial oxygen placed on the body by cocaine can increase the blood pressure of individuals and overall put them at risk for a cardiovascular incident.

Those who use cocaine may experience reduced appetite as a result of the drug. This can be one factor that could influence gastrointestinal problems, which is one of the major side effects of cocaine use. People may feel nausea or vomit due to the drug.

When an individual uses cocaine, it can impact the reabsorption of dopamine, which is a chemical in the brain associated with pleasure. This can produce the feeling of euphoria that people associate with the drug, however, once it has worn off, it can also result in headaches or difficulty focusing.

If someone you care about has abused cocaine in the past or is doing so currently, you understand the impact that this drug can have is more than just physical – it can also take a significant toll on the emotional health of that person as well as those around him or her and have a substantial influence on the quality of life of everyone involved.

To learn more about cocaine addiction treatment and how you can better help your loved one on the path to recovery, please call 888-966-8152.