The Station; No Place for Drinking

We use to have beer in the soda machines. It wasn’t a big deal back in the day, when firehouses were inhabited by people who either volunteered or worked for wages that allowed beer in soda machines to be without the outcry of an informed citizenry. Firefighters went into burning buildings, rescued people and went back to the station. There was no EMS, at least not in the firefighter’s world; there were pumps and ladders, pike poles and nozzles, maybe a Dalmatian; and beer in the soda machines.

Some old-timers argue that a slightly intoxicated firefighter was a better firefighter when the bell tipped and it was time to wear your manhood on your sleeve. Air packs were new, and seldom worn, bunker pants were not even a thought and the people who called you were not concerned with a little beer on the breath of their salvation. Times are different now. Fire Department personnel are in people’s homes at all hours, tending to the sick and injured as well as putting out their fires. We are held to a higher standard; drinking on duty is unacceptable. 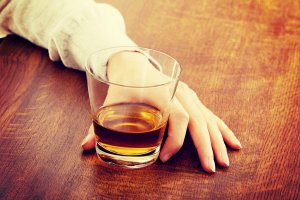 But it happens. It is neither condoned nor practiced out in the open, but like every other segment of the population there will be those who succumb to temptation. The firefighter who brings his or her addiction to work is playing with fire, but is unable to control it. Never is the need for professional help more vital than now. Even if nothing happens, and the firefighter “gets away with it,” the destruction of self-confidence – vital to a firefighter, will be the undoing of a valuable asset to the service and a decent human being. There is no getting away with such a breach of confidence, but there is redemption. Action is essential. Nobody relishes confrontation, but confront the problem we must. Facing our own fears and weakness takes courage, just as bringing those flaws to the attention of another does.

There are a lot of places for a firefighter battling the bottle to hide in a fire station. There are lots of ways to not get caught; a thermos complete with an ‘eye opener,’ Gatorade bottles half filled with vodka and topped off with a splash of purple electrolytes, some cold ones in a cooler in the back of a pick-up truck in a dark corner of the parking lot.

Drinking at the station is easy; being intoxicated at work is not.

Living a secret life is exhausting, mentally and physically. People who do so need help. To reach the point of hiding a habit from everybody requires no small degree of self-loathing. Eventually that feeling becomes so out of control that simply sneaking in a few sips to get through a shift is ineffective. More and more needs to be done to quiet the screaming in the head of an alcoholic who has taken things to far; more drinks, more isolation, more self-hatred.

As the disease of alcoholism progresses, the ability to self-correct diminishes. Seeking professional help is a far away fantasy for the active alcoholic, much like those unfulfilled dreams of lavish vacations, nice cars, happy homes and fulfilling careers. A person in the throes of the deadly thought patterns that have been bred by dependence on alcohol is vulnerable, and truly a danger to him or herself and others.

These desperate people need help, but how?

First, their behavior needs to be exposed. Once their secret is no longer the healing can begin, albeit as little more than a fleeting thought lost in a maze of a million others inside the head of the active alcoholic. Once that thought is planted, however, it grows if nurtured. The life of the person who needs help is at stake. The lives of the firefighters assigned to the same shift are also at stake. The lives of the citizens we are sworn to protect deserve the fittest, well adjusted and competent people available responding to their emergencies.Just because we are firefighters with an enormous responsibility to ourselves, our co-workers and the public does not automatically make us immune to poor choices and behaviors. The thought of being impaired in the slightest is abhorrent to most firefighters.

I believe that ALL firefighters think that being impaired is unacceptable. Sadly, the disease of alcoholism tends to think for itself.

Even the most well intentioned alcoholic makes poor decisions. Getting help before a problem becomes catastrophic is crucial.