Social media has the ability to level the playing field in order for those with a message to reach the masses without needing a record deal or the need to be an A-list actor in a major studio film. Social media has inadvertently created opportunities for the “everyday person” to shine with their unique talents and abilities. But whether you are the girl next door, an influencer, a successful businessperson, or all three, addiction can have an impact on your life. Addiction to substances such as cocaine can stop an individual from thriving in life. Those struggling may need to reach out to get professional help.

Joy Sutton, host of American Addiction Centers’ (AAC’s) talk show, Addiction Talk, interviewed Ariana Ruiz – mother and Tik Tok influencer.  Ariana has attracted millions of followers from her cooking videos. And although she may be known as a cooking guru, she also shares a lot about her Hispanic culture on her platform as well.

Be sure to listen to this timely episode entitled: “Positive Influence: A TikToker’s Addiction Story.” In this interview, Ariana shares her struggles with cocaine addiction and her fears about potentially being shamed when she was in active addiction.

The Tik Tok personality star was afraid of losing followers, [that people] would shun her. “It was a huge concern. That people would see me in a different light. There’s this whole image a lot of people on social media portray, but behind closed doors, it can be completely different.”

Just like actors in television and film, influencers on social media have an image to maintain as well. Ariana was known as a mom to her daughters. As a cooking guru to millions. She had a legitimate concern about how others would perceive her.

Ariana struggled with an addiction to cocaine. Cocaine is an addictive stimulant that directly impacts the brain. 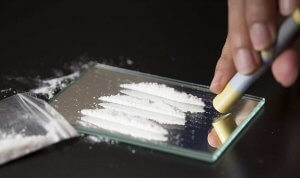 Although cocaine was more popular in the 1980s and 1990s, it is one of the oldest known substances and is still abused by many today.

At the time when [cocaine misuse] started impacting Ariana’s image, she had about a half a million followers then. But many didn’t know what she was secretly dealing with behind the closed doors that she made sure remained locked. And the comments started pouring in:

“Where are these videos?”

Ariana responded the best way she knew how. “I’m working on it.”

The influencer goes on to say, “At this point, I was badly into my active addiction. When I did go to rehab, my phone got taken away in the first 30 days, so I couldn’t do advertisements. Many people were questioning my whereabouts, what I was doing, and inevitably, just making up things along the way.”

Ariana ended up overdosing, yet remained conscious, and called 9-1-1 to get help. As she was losing control of her body, she communicated with the EMTs (emergency medical technicians) once they arrived. That sort of strength and determination through a scary and life-threatening moment speaks volumes about who she is.

To learn more about Ariana Ruiz and her courageous 9-1-1- call, please watch this episode of Addiction Talk. And if you find yourself battling with substance misuse, please reach out for the help that you need today.

Nitara Osbourne
Author
Nitara Osbourne, M.Ed., is an award-winning writer and Content Specialist at American Addiction Centers.
Read Our Editorial Policy
Recent Posts
Related Tags
cocaine
substance misuse
Don’t wait. Call us now.
Our admissions navigators are available to help 24/7 to discuss treatment.
Prefer texting to talking on the phone? We’ve got you covered 24/7.
Instead, sign up for text support to receive: