According to the Centers for Disease Control and Prevention, in 2018, more than 11% of Americans ages 12 and older used illicit substances within the month before being surveyed.1

Many abused drugs are associated with the development of significant physiological dependence—especially when consistently consumed in large amounts. When substance dependence develops, people may be at risk of experiencing unpleasant withdrawal symptoms when trying to stop drinking or using drugs.

What Is Drug Withdrawal?

Drug withdrawal is a physiological response to the sudden quitting or slowing of use of a substance to which the body has grown dependent on. The various types of drug withdrawal syndromes may involve different combinations of physical, mental, and emotional symptoms—some of which can prove dangerous if left unmanaged.

If you believe you or someone you love may be struggling with addiction, call or text us and let us help you determine a path to treatment.

Why Does Withdrawal Occur?

When someone regularly drinks alcohol or uses certain drugs, their brain may begin to adjust to the presence of these substances. They may eventually become physiologically dependent on their substance of choice and utterly reliant on it to function and feel “normal.”

In people who develop significant levels of dependence, withdrawal is often an inevitable response to the sudden absence or declining blood concentration of a given substance. Withdrawal symptoms may develop when a substance-dependent person quits a substance “cold turkey” or substantially reduces how much they are using. During withdrawal, the body attempts to reach a new state of homeostasis as it rids itself of any lingering chemical influence of the drug in question. This can result in temporary disruptions in brain chemistry and may be accompanied by significant mental and physical health repercussions.

American Addiction Centers (AAC) offers unique care for every single patient that walks through our facility doors. Using evidence-based therapies and treatments, our team of medical professionals can help you recover from your substance addiction. Give us a call today to learn more at

Can Withdrawal Be Lethal?

If not medically managed, withdrawal from certain substances, such as alcohol and benzodiazepines, can be quite severe and, in some cases, lethal. But it’s rare.

Though opioid withdrawal symptoms are seldom life-threatening, they can be intensely uncomfortable. And though the symptoms themselves may not be lethal, one significant risk for those attempting to opioid withdrawal without medical assistance is returning to opioid use. Should this happen after a long enough duration of abstinence that opioid tolerance has significantly decreased, people may be at a heightened risk of overdose.3,4

In such situations, medical detox—where a team of doctors and nurses can help manage withdrawal symptoms, alleviate discomfort, and minimize the risk of dangerous withdrawal complications—can be immensely helpful in early recovery and has the potential to ultimately save lives.

Take Our “Am I a Drug Addict?” Self-Assessment

Take our free, 5-minute “Am I a Drug Addict?” self-assessment below if you think you or someone you love might be struggling with drug addiction. The evaluation consists of 11 yes or no questions that are intended to be used as an informational tool to assess the severity and probability of a substance use disorder. The test is free, confidential, and no personal information is needed to receive the result.

The precise duration of withdrawal is influenced by which substance someone used as well as the magnitude of their dependence on the substance. It may take days, weeks, and—in some cases—months to reach complete resolution of all withdrawal symptoms, depending on various factors and individual differences.

A general overview of certain drugs and their characteristic withdrawal timeline is as follows: 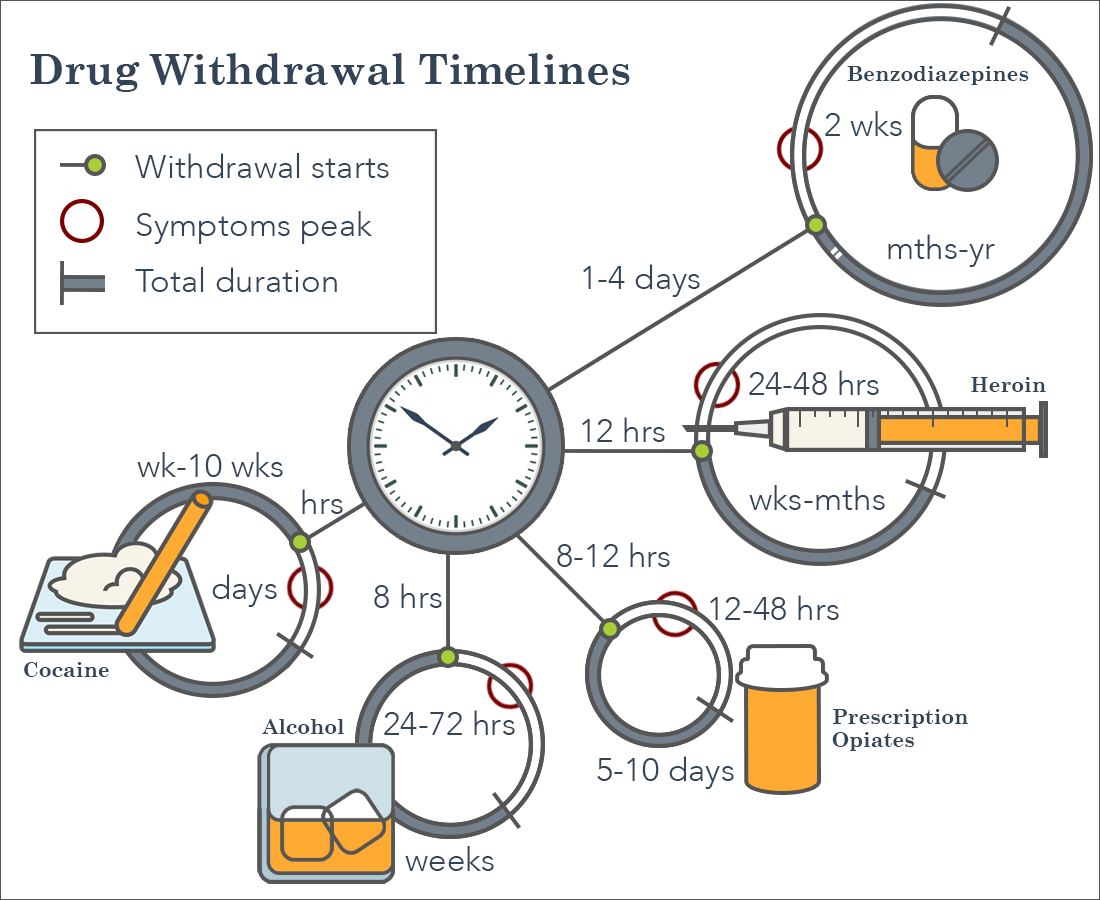 The severity and duration of withdrawal from substance dependence are contingent upon many factors, including the amount of a drug that someone used and how frequently they used it. Unfortunately, withdrawing from drugs is often a profoundly uncomfortable experience that can stall or otherwise complicate recovery efforts.

Amelia Sharp
Related Topics
Related Tags
withdrawal
Don’t wait. Call us now.
Our admissions navigators are available to help 24/7 to discuss treatment.
Why call us?
Get addiction help now (24/7 helpline)We’re here for you every step of the way.