It has been recently estimated that there were more than 72,000 drug overdose deaths in the United States in 2017 – a rise of roughly 10 percent from the year prior. While that number may be staggering, statistics often fall short when trying to reach us on an emotional level; it’s difficult to grasp the gravity of life lost when people are represented by numbers, but the truth is 1 in 3 Americans will have a friend who dies from a drug overdose.

The epidemic is only getting worse. In 2017, President Trump declared the opioid crisis a nationwide public health emergency. In 2010, 18 out of every 100,000 adults between the ages of 25 and 34 died from a drug overdose, while nearly 35 out of every 100,000 people in the same age group died from a drug overdose in 2016. We set out to discover how these numbers became reality by surveying more than 1,000 Americans on their personal relationships with fatal overdose victims. We then analyzed their responses to find out how fatal overdoses are affecting lives beyond the statistics. What we found is both tragic and eye-opening. 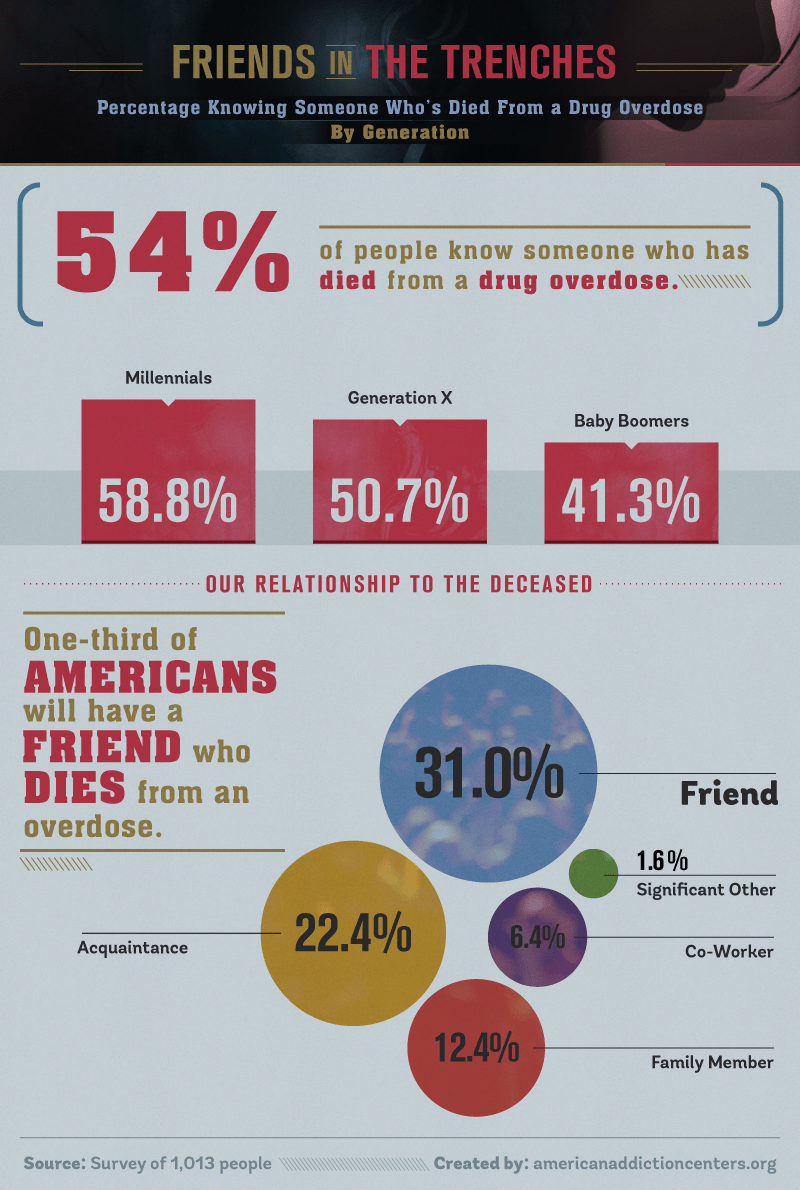 According to our research, more than half of us personally know someone who fatally overdosed. Millennials are the generation most exposed – nearly 59 percent knew somebody who fatally overdosed. This could possibly be attributed to the rise in availability of synthetic opioids like fentanyl, a drug up to 50 times more potent than heroin and often used as an additive to the drug.

Knowing somebody who overdoses on a drug can leave the living with many questions: Could I have intervened? Could we have done something different? The weight of knowing somebody who overdoses may affect others’ perceptions of our own personal lives, as well. Families that have a member die from drugs may be ostracized from their community rather than receiving support due to the stigmatizing nature of drugs in our society. However, there are organizations and resources that not only help with addiction and drug abuse but with grieving and coping as well. 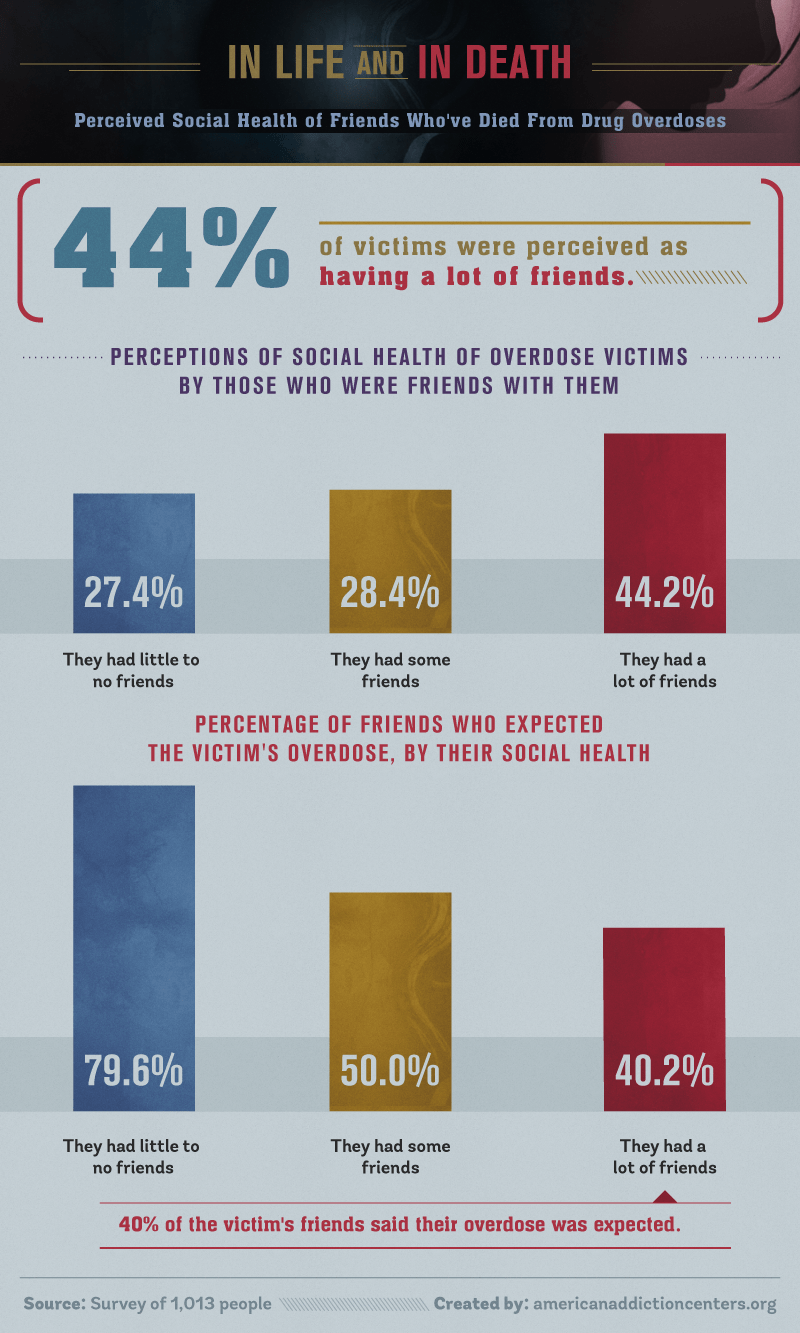 We also looked into the many Americans who’d lost a friend to drug overdose to ascertain whether there were signs of trouble. Nearly half said their friend’s drug overdose was not a surprise.

Certain behaviors can indicate something may be going on under the surface. One such indicator could be the health of relationships deteriorating as somebody succumbs to addiction. Here, we explore the relationship between social health and drug overdoses.

What we found struck our curiosity. Anecdotally, we may think addiction is reserved for outcasts; however, our research found this to be untrue. We asked the friends of those who’d passed to describe the social health of the departed, and 40 percent said their deceased friend had a vibrant social life. While the friends who said the victim had poor social health were much more likely to expect a tragic outcome, this begs the question: Is it the people we least expect who might carry the heaviest weight of addiction?

Writing on the Wall 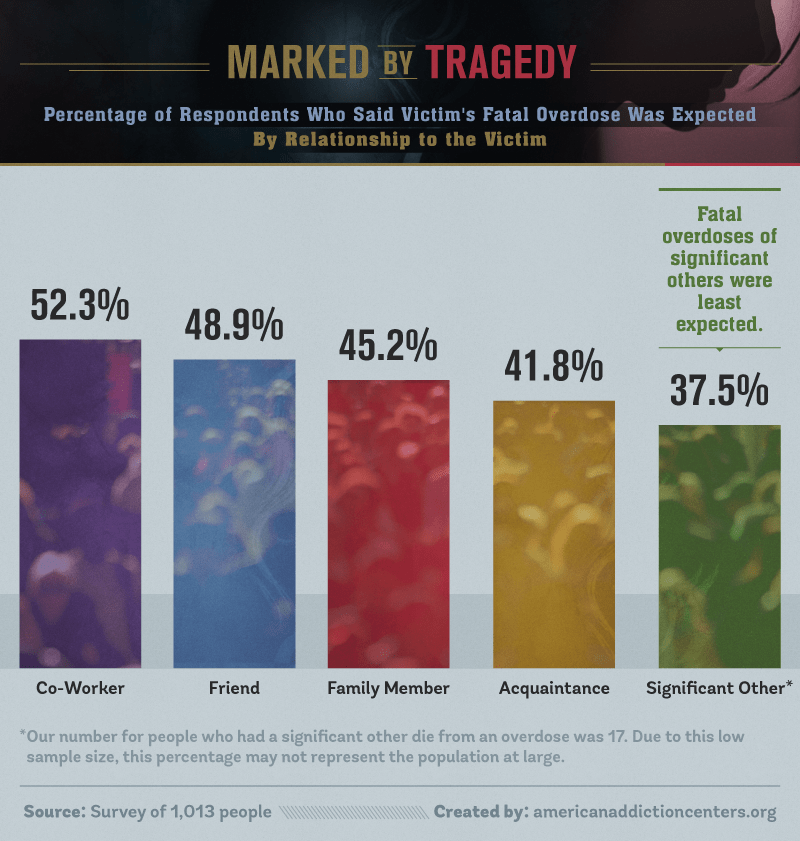 As we saw above, the result of an overdose does not always blindside us. In fact, sometimes we sadly see it coming, which is why it’s often a burdening responsibility taken on by loved ones to help a user get into treatment, especially against the person’s will. But not everyone can spot these signs, and the indicators can vary from person to person.

In our study, the death of a significant other was the last overdose death we’d expect. The relationships where signs of trouble were most palpable were in that of co-workers and friends, both at around 50 percent expectancy. In other words, nearly half of our respondents who had a friend die of an overdose said the overdose was expected.

Is It a Choice? 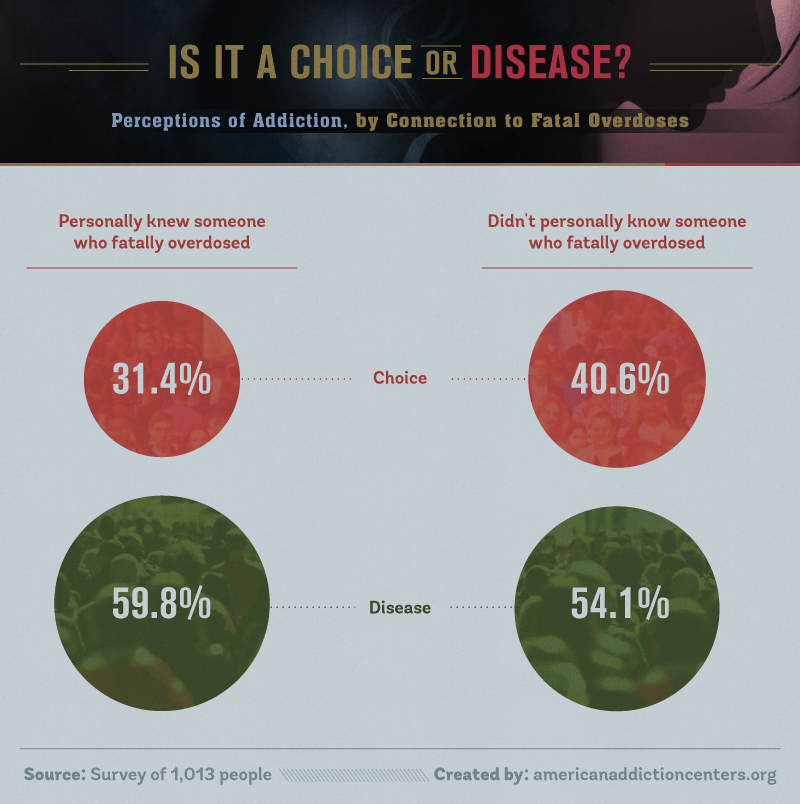 With nearly 200 Americans dying from overdoses daily, the debate on our predisposition to addiction has come into question. Some argue that it is genetic, while others say it’s environmental or a combination of both factors. But where do people who’ve been exposed to its horror firsthand stand on this debate versus those who have not? We found that those who’ve known somebody who has died from an overdose were nearly 10 percent less likely to think drug addiction is a choice than those who had never known a person who died from an overdose. 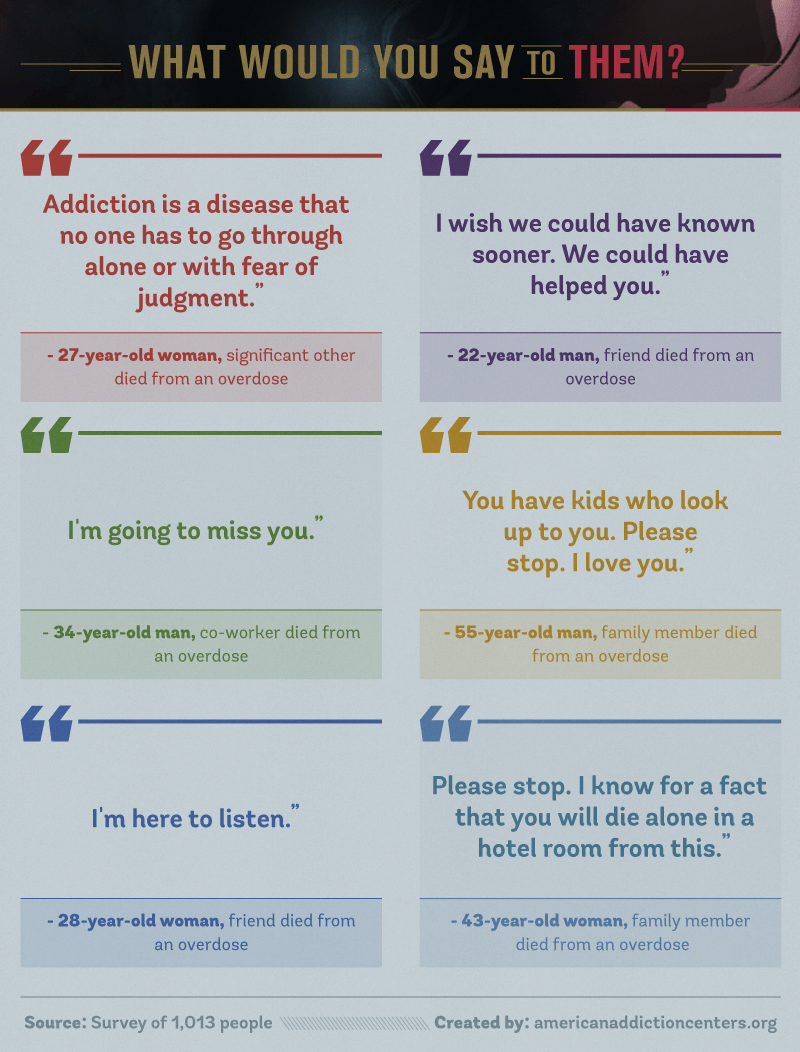 In hindsight, whether the signs were there or not, a drug overdose can usually mean that the victim was struggling in their life. While we know it’s a combination of biology, environment, and development that can lead to addiction, the ones left behind can often feel guilt over not confronting the situation when they had a chance. We asked, if given the chance, what people would say to the victim they knew. Their words may ignite action from those who presently know somebody struggling.

According to our research, the likelihood you will personally know somebody who dies from a fatal drug overdose is astoundingly high – and, chances are, you may not be entirely surprised by the outcome. But what does this mean? It means some of us may be aware that our personal connections are struggling, in which case treatment could potentially avert tragedy. If you think somebody you know may be struggling with some form of addiction, learn from our survey participants who’ve lost someone in their life, and don’t be afraid to reach out and offer help. That may come in the form of rehabilitation or by sharing this article so someone else can help a person they know.

We used Amazon Mechanical Turk to collect responses from 1,013 people. Fifty-one percent of respondents were male, and 49 percent were female. Participants ranged in age from 18 to 80 with a mean of 37 and a standard deviation of 12. The survey contained attention checks. We had 17 respondents who answered that a significant other had passed away from a drug overdose, and, thus, these numbers may not represent the larger population. These data were not weighted, therefore these results should be taken as exploratory. As such, we hope this preliminary research may pave the way for a larger and more definitive study to be done.

Every day, Americans are dying from fatal drug overdoses, and whether we struggle personally with addiction or not, more than half of us will personally say goodbye to someone who becomes a statistic. If you know somebody who has ever lost the fight to addiction, or if you want to see these numbers lessen, you can start by sharing this article for noncommercial purposes and linking back to this page.