An Analysis of Drug & Alcohol Mentions in Dating App Profiles

Technology has changed many aspects of our day to day life, and one area that has been very affected is dating. More and more people are turning to online dating services and apps to find the perfect someone. In fact, a recent survey found that 1 in 4 people have used or are currently using a dating app.

Dating apps provide a unique window into a person’s life. Before even meeting someone in person, you can scan their bio and photos to learn more about who they are. One especially telling portion of someone’s profile is their bio. Dating apps typically limit the number of characters allowed in this section, so it’s always interesting to see how users decide to use them. What a person decides to include in their bio and photos is a reflection of how they want to portray themselves to their potential dating pool. But how forthcoming are they about who they really are? Specifically, we were interested to know how open dating app users are about their drug and alcohol use.

To explore how prevalent are drugs and alcohol are in the dating app world today, we looked at the bios of 5,000 dating app users in cities around the U.S. and looked for drug and alcohol references, including emojis.

To gather the data set, we reviewed the bios of 200 dating app users in each of the 25 largest U.S. cities. The data set for each city included 100 females bios and 100 male bios. We tallied up the number of drug and alcohol mentions in bios to determine which cities’ dating app users mention drug and alcohol in profiles the most and least. Additionally, we determined which types of alcohol and substances are mentioned most often. Read on to learn more about what we uncovered.

WHERE DATING APP USERS MENTION DRUGS AND ALCOHOL THE MOST 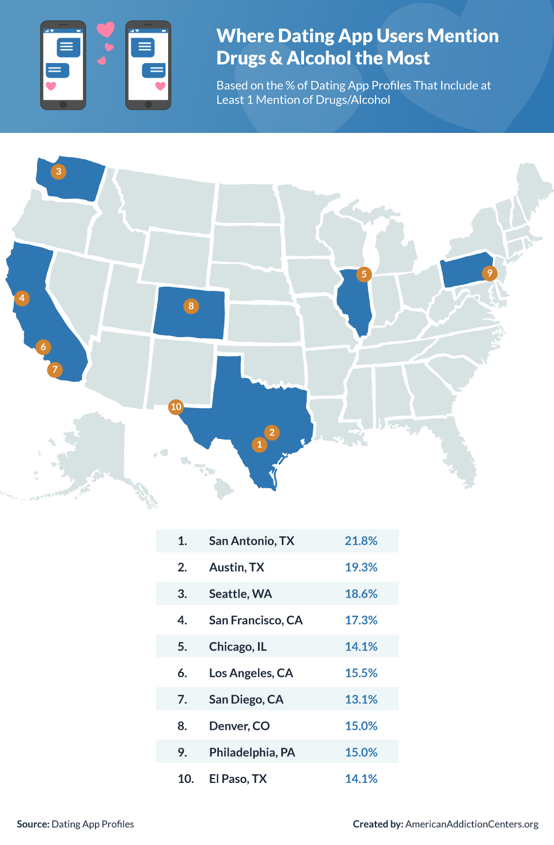 Where Dating App Users Mention Drugs and Alcohol the Least 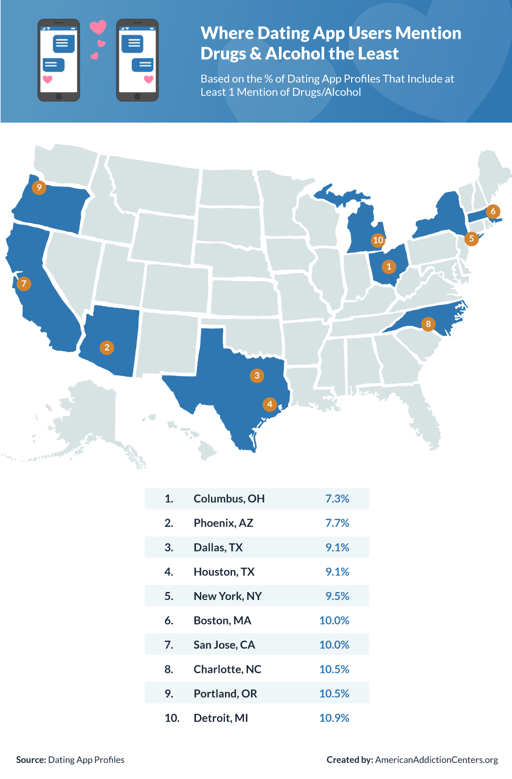 Next, we looked at the cities with the lowest percentage of profiles that contain drug or alcohol references. You’ll find the least number of alcohol and drug references in Columbus, Phoenix, and Dallas, with only 7.3%, 7.7%, and 9.1% of profiles containing a reference, respectively. You have about a 1 in 10 chance of running into a drug or alcohol reference on dating apps in Boston, San Jose, Charlotte, Portland, and Detroit. 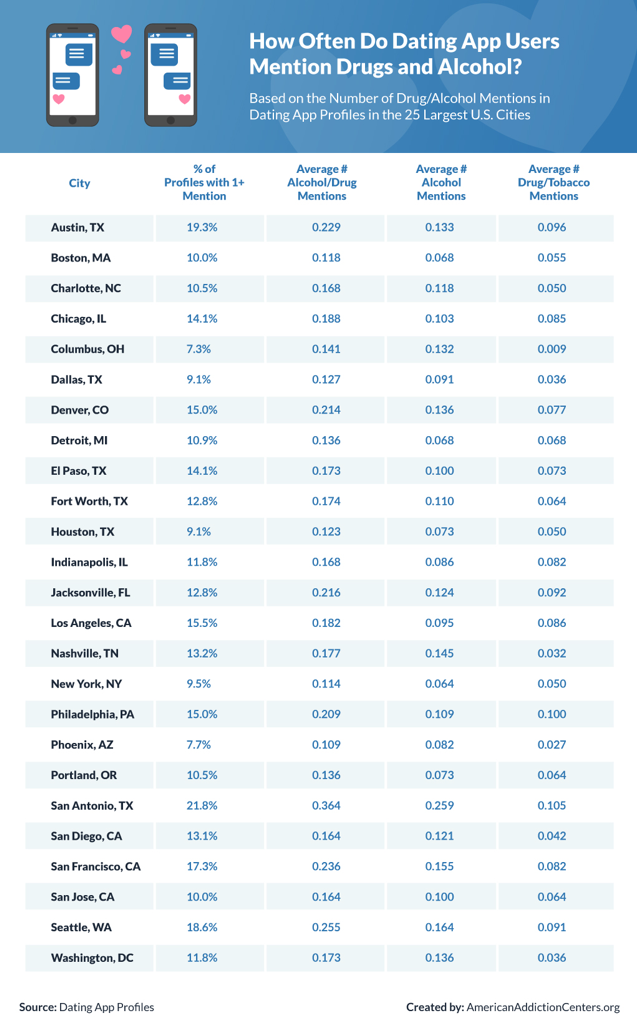 In addition to the percentage of bios that contain a drug or alcohol reference, we also calculated the average number of both alcohol and drug or tobacco mentions in each city. Overall, we found that alcohol references were more common than drug references. The average number of alcohol mentions was higher than that of drug mentions in every city except for Detroit where they were equal. 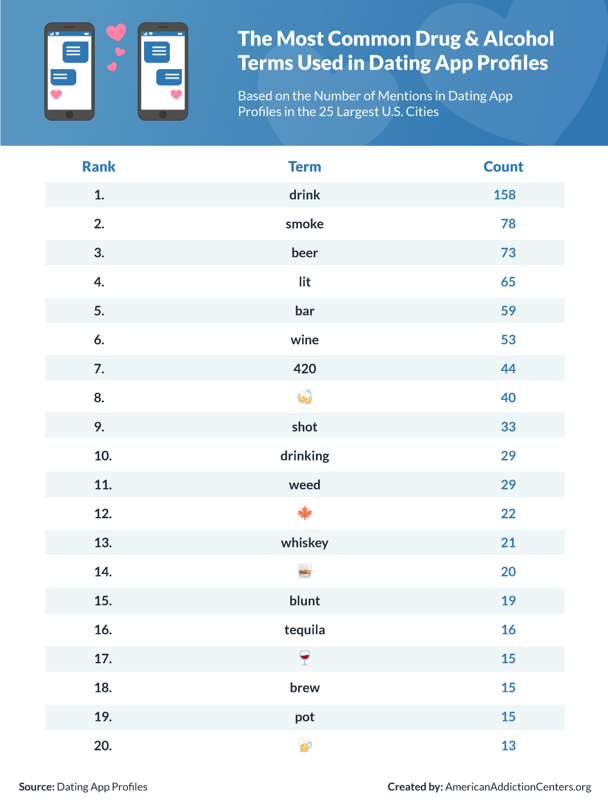 Lastly, we took a closer look at what types of substances were mentioned most often in the sample. We found that general terms like ‘drink’ and ‘smoke’ were used most. Beer was the most commonly mentioned type of alcohol, followed by wine. Weed was the most commonly mentioned type of drug or tobacco. We extended our analysis to include drinking or drug related emojis too, and found that various drinking themed emojis were used nearly 100 times.

Choosing a partner is an incredibly important decision. Who you spend your time with has a direct impact on you and it can affect the decisions you make about things like using drugs or alcohol. It’s important to be on the lookout for drug and alcohol references as you’re navigating the dating app world so you can select a partner that can help you maintain a healthy relationship with drugs and alcohol. If you or someone you know is concerned they are dating someone that is abusing drugs or alcohol, review our resources to learn more about how you can get them the help they might need.