Stories of recreational drug use gone wrong have held an increasingly large presence in news headlines as of late. Reports of celebrity overdoses and about the opioid crisis seem to be staples in the day’s top news regardless of the day of the week. Pop culture has a history of normalizing drug use and, as a result, can make it seem like it’s okay or even “cool” to use drugs. It’s easy for impressionable people to get caught up in the seeming glamour of drug use if they are not properly informed about the risks and dangers associated with it — especially young people.

Fueled by this realization, we decided to look into the education of America’s youth on drug use to see if there is more we can do to prevent the dangers from becoming a reality for so many people. To do so, we surveyed 500 young adults (18-24 years old) about whether or not they received any kind of drug education while in school and what that education looked like. Our results showed that while many young people are receiving education about drugs and their potential consequences, the details of that education vary.

Where Are Young People Learning About Drugs? 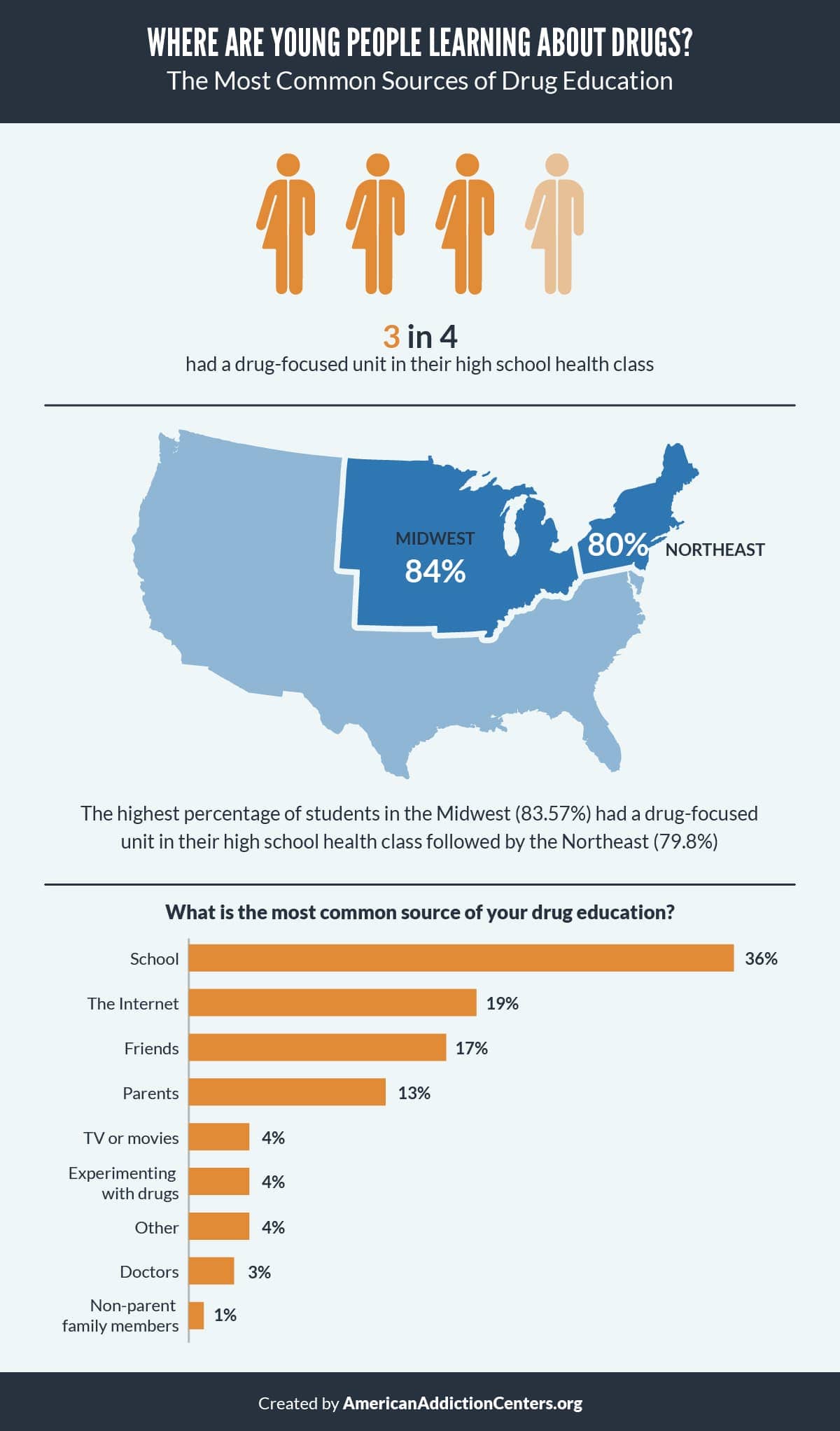 Out of the 500 respondents surveyed, only 3 out of 4 had a drug-focused unit in their health class in high school. In the U.S., the Midwest had the highest percentage of respondents with a drug-focused unit with 83.57% of people in this region reporting so. Alternatively, the West had the lowest percentage with only 65.5% of people responding that they learned about drugs in their health course. Following school, the internet (19%) and friends (17%) were the top sources of drug education for respondents.

The Most Effective Methods of Drug Education 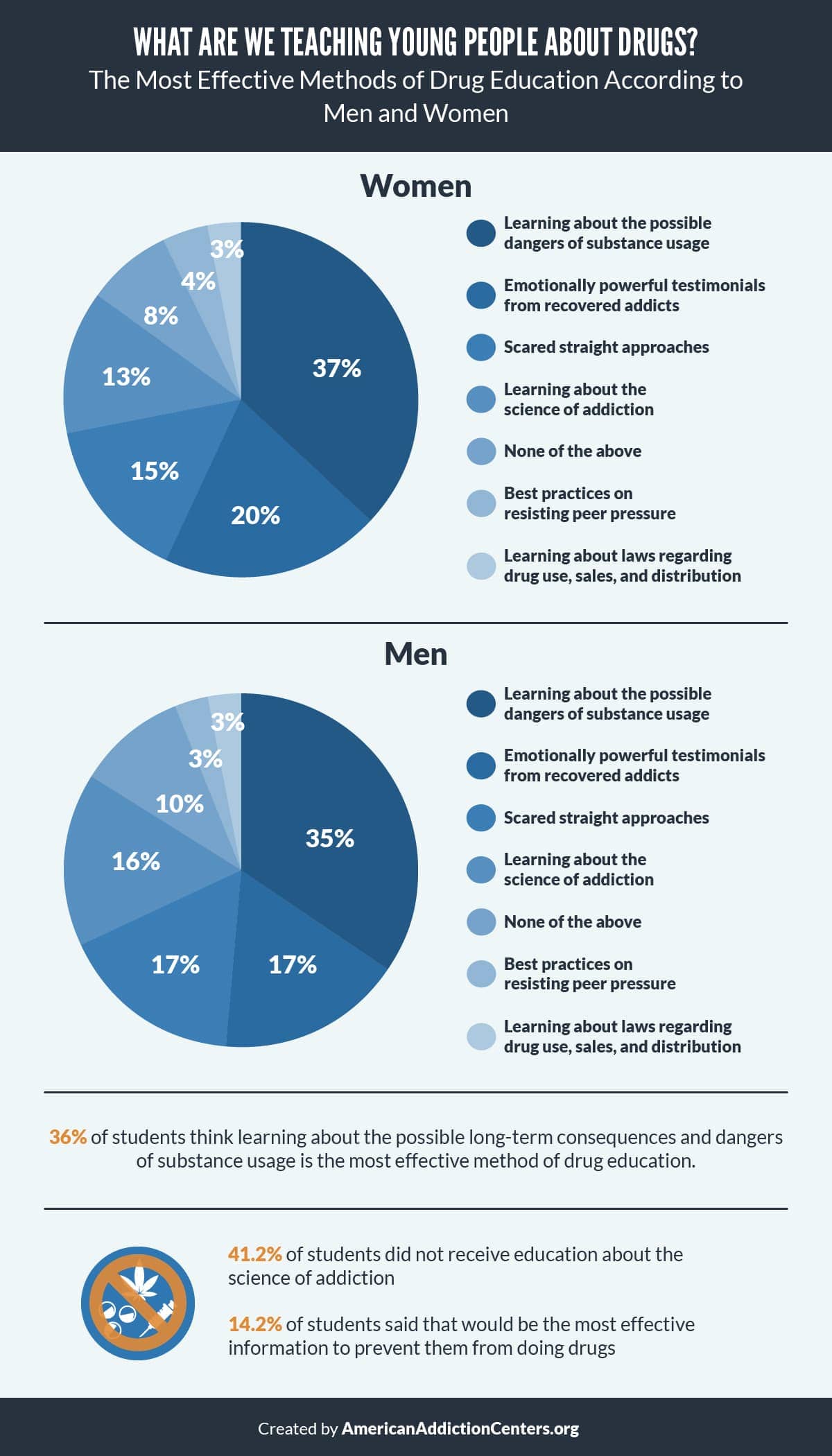 When asked what the most effective form of drug education to prevent participants from experimenting with drugs would be, the highest percentage of both men and women responded that learning about the possible dangers of substance abuse would be the most impactful. This was followed by testimonials and “scared straight” methods for both groups. Notably, 14.2% of respondents said that the most effective method of drug prevention for them would be to learn about the science of addiction, yet 41.2% responded that they never received any education on this subject. 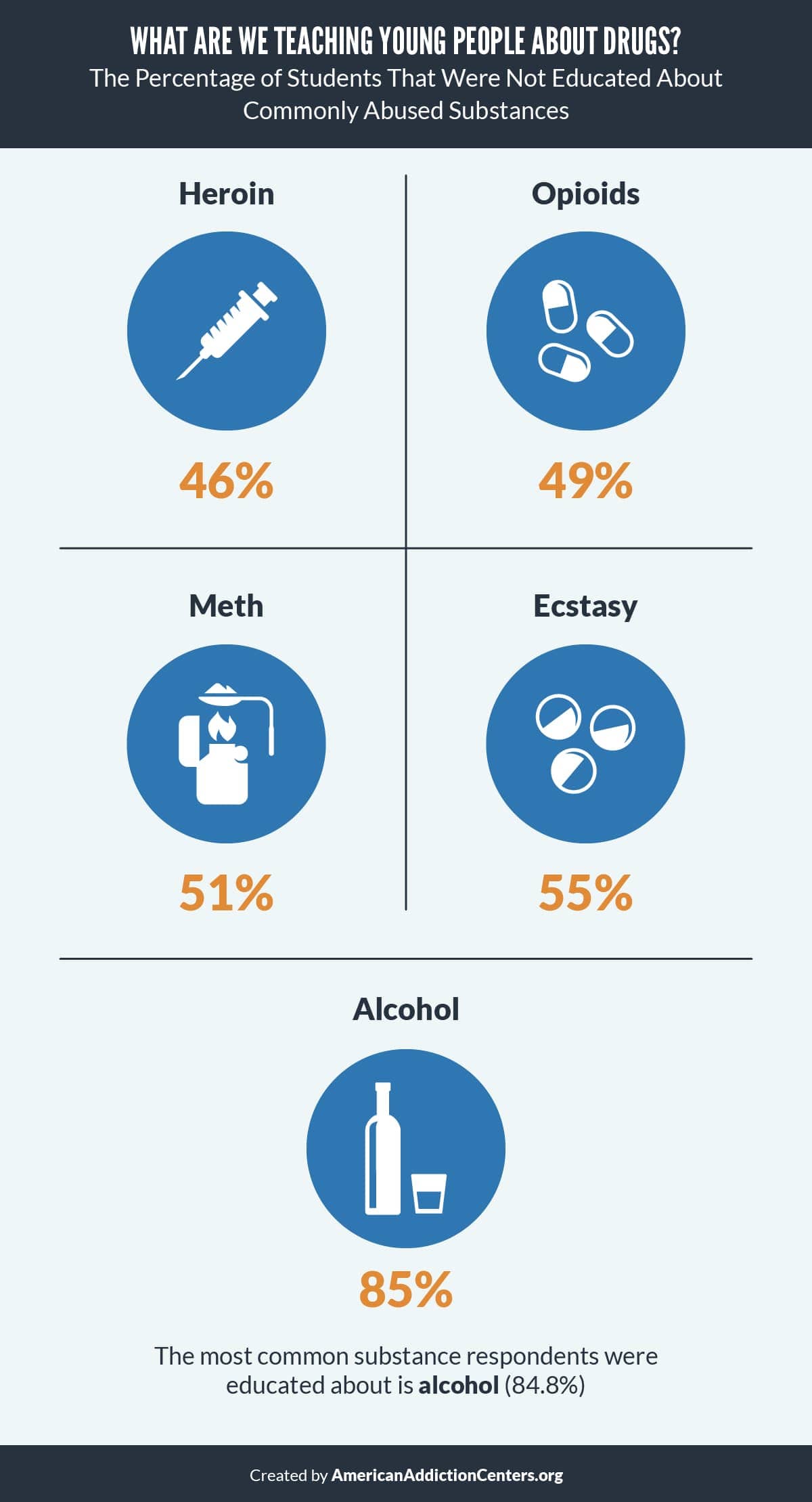 The Effect of Social Media on Drug Use 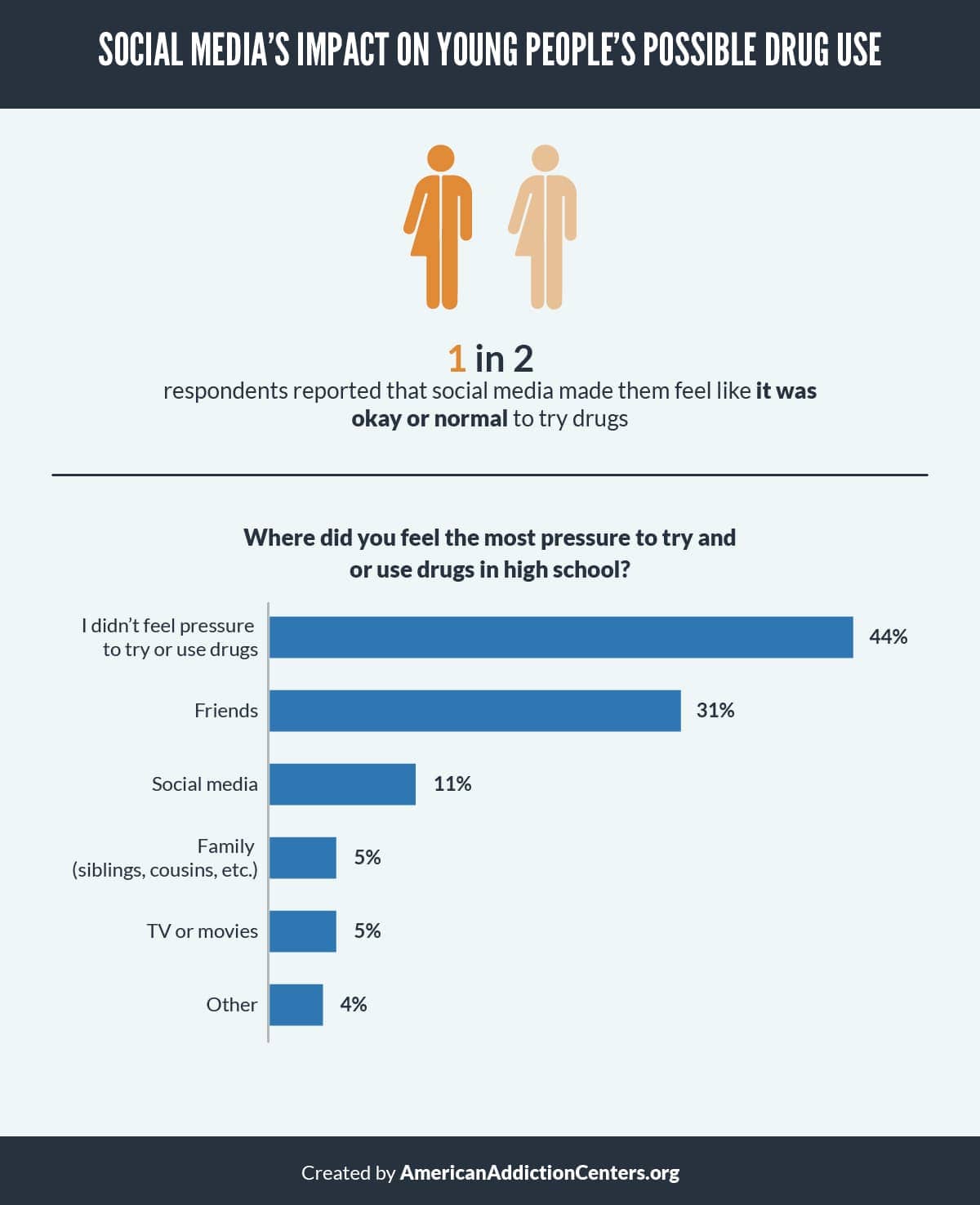 Young People’s Perception of Drug Use 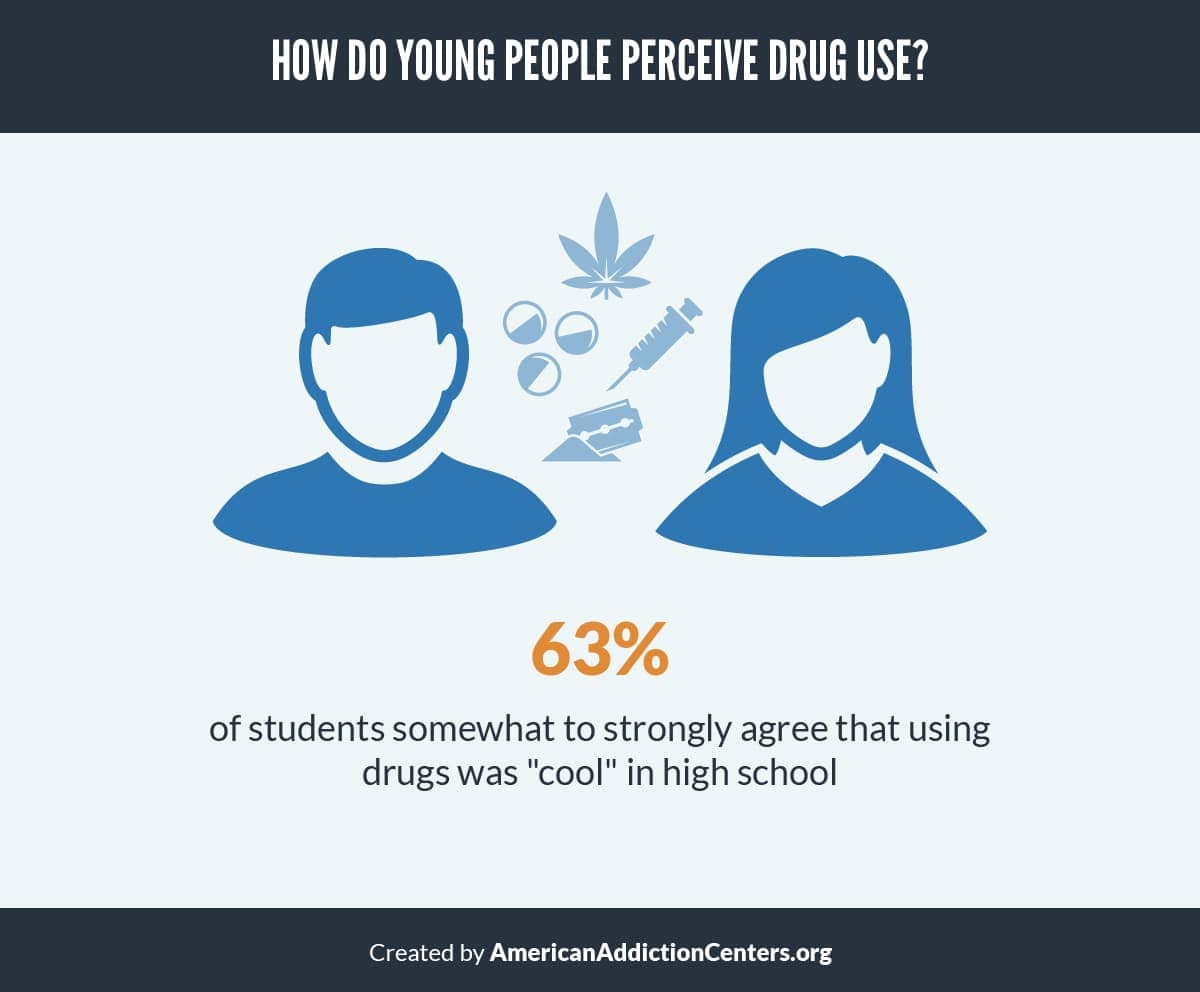 63% of respondents reported that in high school it was perceived as “cool” to do drugs. This is a concerning statistic since people tend to be especially susceptible to peer pressure at this age. During a time where so many young people are trying to find where they fit in, they may be more apt to make poor decisions in an attempt to impress or fit in with their peers.

How Effective is Drug Education in School? 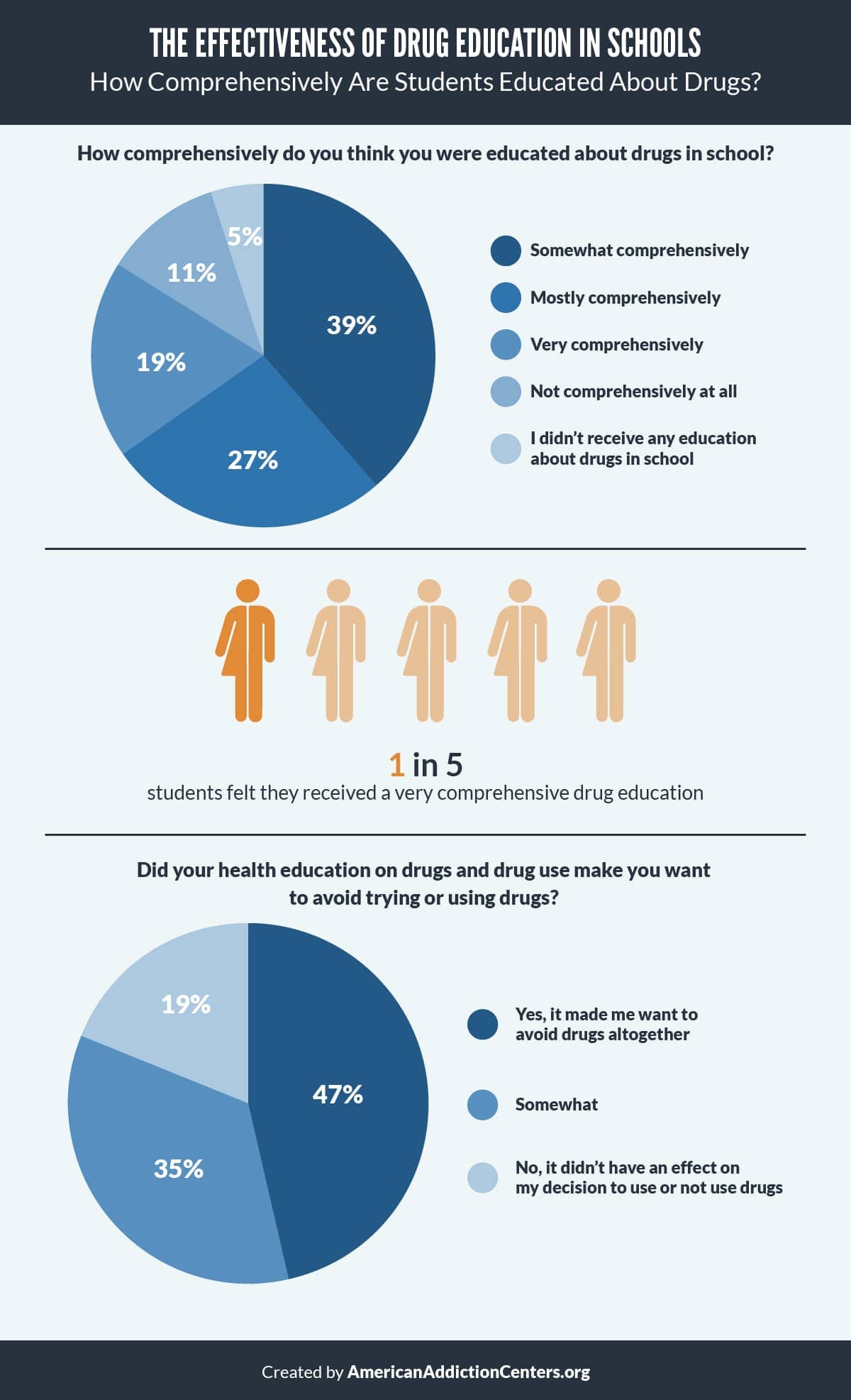 Beyond what was taught (or not taught), we also wanted to learn how effective drug education is. Almost half (47%) of respondents said that their drug education made them want to avoid drugs altogether, while 35% reported that it “somewhat” made them want to avoid drugs. While these numbers can always improve, this is a good starting point to preventing drug use in our youth. Most respondents said that their education was at least somewhat comprehensive, and 1 out of 5 individuals felt that they received a “very comprehensive” drug education in school. Most importantly, 81.6% of respondents felt at least somewhat safe asking questions about and discussing the risks of drug use at school.

Having an open conversation about drugs and the dangers associated with recreational use is so important on the path to prevention. If schools can create a comprehensive drug education program and students feel safe to express their questions and concerns, we can potentially minimize drug use even more. This survey gave us important insight into how students feel about their education concerning drugs, and it can be used to improve discussions on the topic in the future.

Can I use this information? The information and graphics in this blog post can be used and displayed by all commercial and noncommercial websites without charge. However, use is only permitted with proper attribution to americanaddictioncenters.org. When using this information or any of these graphics, please include a backlink to this page.