The Long Term Effects of Drug Abuse and Life Expectancy

Habitual drug use has been a societal issue for as long as there have been societies, and it’s clear that things need to change. Drugs, like heroin, cocaine, and methamphetamine, are getting easier to purchase and consume, which only increases the number of times users are compelled to take them. In fact, it’s not uncommon to hear accounts of people taking drugs two, four, or even five times per day. Given this information, we asked ourselves – how does habitual drug use affect the life expectancy of users?

At American Addiction Centers, we are constantly researching drug-related issues to find trends that can help us stay informed when we’re helping people overcome their drug addictions. To answer the question above, we used the Omni Calculator Addiction Calculator to explore the impact on life expectancy for drug users based on the daily and weekly use of specific drugs. We visualized these changes in life expectancy drug users can expect to see from continued use of various substances in charts, which you can see below. The study includes the potential life lost from abusing cocaine, heroin, meth, and methadone pills. It’s important to note that when discussing methadone abuse we’re referring to taking methadone multiple times per day with a clear intent to get high. Methadone as prescribed by a doctor (typically no more than once per day) is considered a safe and effective way to help treat opioid addiction by controlling craving and withdrawal symptoms. 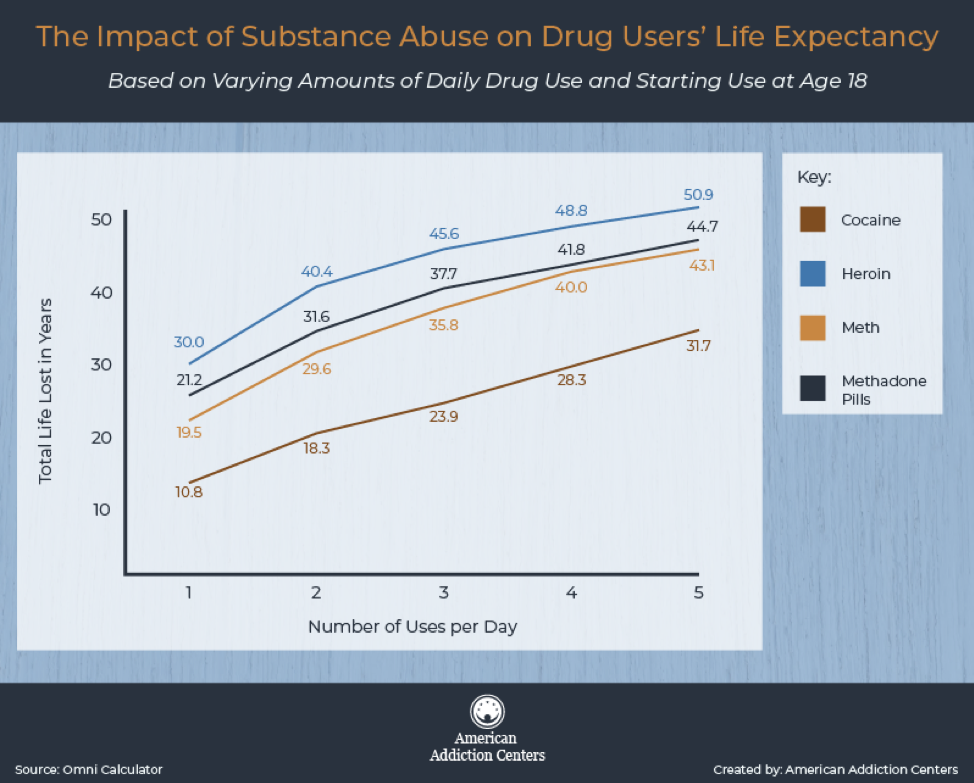 While any sort of substance abuse will impact a drug user’s life expectancy, some substances have a greater impact than others. To find the adjusted life expectancy of drug users, we looked at four specific drugs: cocaine, heroin, meth, and methadone pills. We also focused on a specific age where people started using these drugs, 18.

Cocaine is the least life-draining when compared to the other substances, but the potential for life lost was still significant. Depending on the number of times it’s used per day, the user could lose between 10-30 years off of their lives. Heroin had the most life lost across the board. Interestingly, we found that if a user takes heroin just once a day, they would lose 30 years off of their life, which is almost as many years as taking cocaine 5 times a day. That number climbs to 50.9 years if the use increases to 5 times daily.

Another interesting insight we found was that meth and methadone pills had very similar trends to each other. At each variable, they were within one or two years of each other, while the other two drugs had much larger gaps between them by comparison. 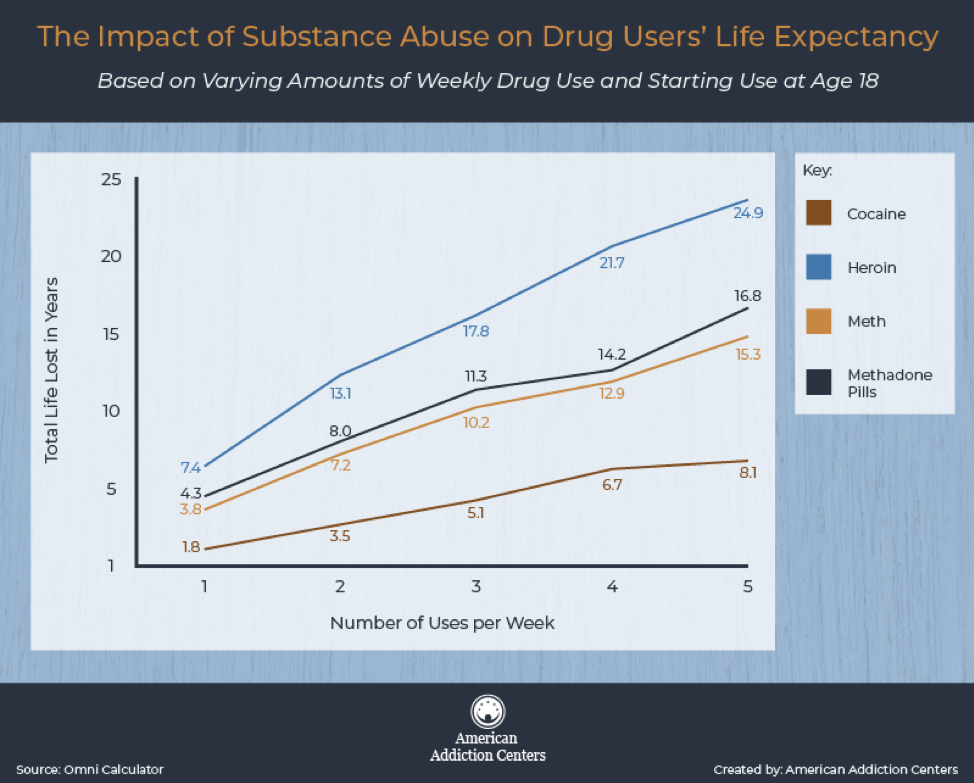 When looking at weekly habits, the numbers were much lower but still eye-opening. Again, cocaine had the lowest number of years lost with only 1.8 – 8.1 years. At the top end of the spectrum was heroin, which had the potential to take almost 25 years off of an addict’s life if they use the drug 5 times per week. 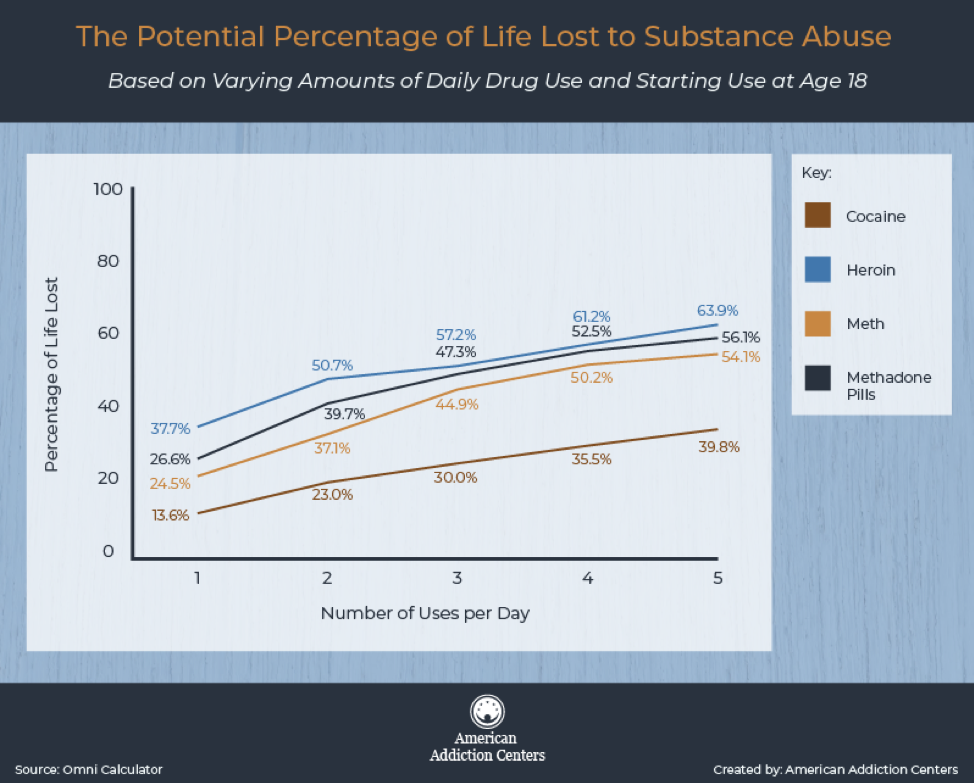 As a part of our research, we wanted to take the data from above and convert it into the percentage of life a user is losing through their drug addiction. Of course, the percentages varied with each drug and use cadence. For example, if a user takes cocaine once a day, they would lose almost 14% of their life. If you up that usage to 5 times per day, they would lose 39.8% of their lives to drugs.

Those numbers pale in comparison to the percentages seen with heroin use, however. We found that if a user takes heroin five times a day, they would lose over 60% of their life, which is equal parts gut-wrenching and heartbreaking. If a user takes methadone pills at that same rate, they could lose 56% of their lives and meth users would lose 54%. 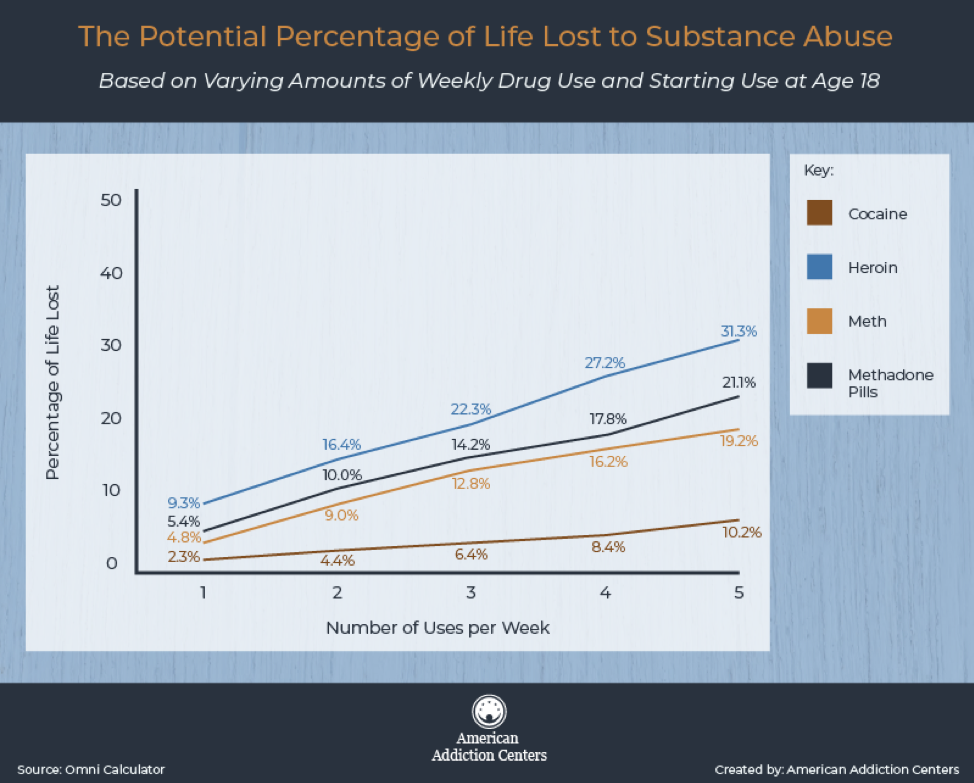 Lastly, we converted the life expectancy based on weekly drug use to percentages as well. Again, we saw staggering numbers across the board. At the low end of our findings, users would lose between 2.3% and 9.3% of their lives depending on what drug they used. At the higher end, however, they have the potential to lose anywhere between 10.2% and 31.3% of their lives due to their addiction.

Life is the hardest thing that will ever happen to any of us, but it’s also the most fulfilling. If you lose even a second of it to drug addiction, that’s simply too much. But, there’s a way that you can take your life back from addiction – getting help. If you or a loved one is struggling with drug dependency, don’t hesitate to contact one of our treatment centers to learn about how we can help.

Editorial Staff
Author, American Addiction Centers
The editorial staff of American Addiction Centers is made up of credentialed clinical reviewers with hands-on experience in or expert knowledge of addiction treatment. Read More
Read Our Editorial Policies
Recent Posts
Don’t wait. Call us now.
Our admissions navigators are available to help 24/7 to discuss treatment.
Why call us?
Prefer texting to talking on the phone? We’ve got you covered 24/7.
Instead, sign up for text support to receive:
;