Marijuana Busts Across The U.S.

A Look at Marijuana Busts Across the U.S.

But despite the legality of recreational marijuana use in an ever-increasing number of US states, the majority of the country has yet to legalize recreational, and in many cases, the medical, use of the drug.

Which begs the question: How does the legality (or lack thereof) of marijuana within a state affect marijuana growth activity there?

With this question in mind, we decided to take a look at the presence of marijuana growing busts across the country. We analyzed the latest 2018 Drug Enforcement Administration data on the subject to determine the number of cultivated and eradicated plants, the number of marijuana-related arrests, and the amount of bulk marijuana processed by state.

I: The Number of Cultivated Marijuana Plants in Each U.S. State 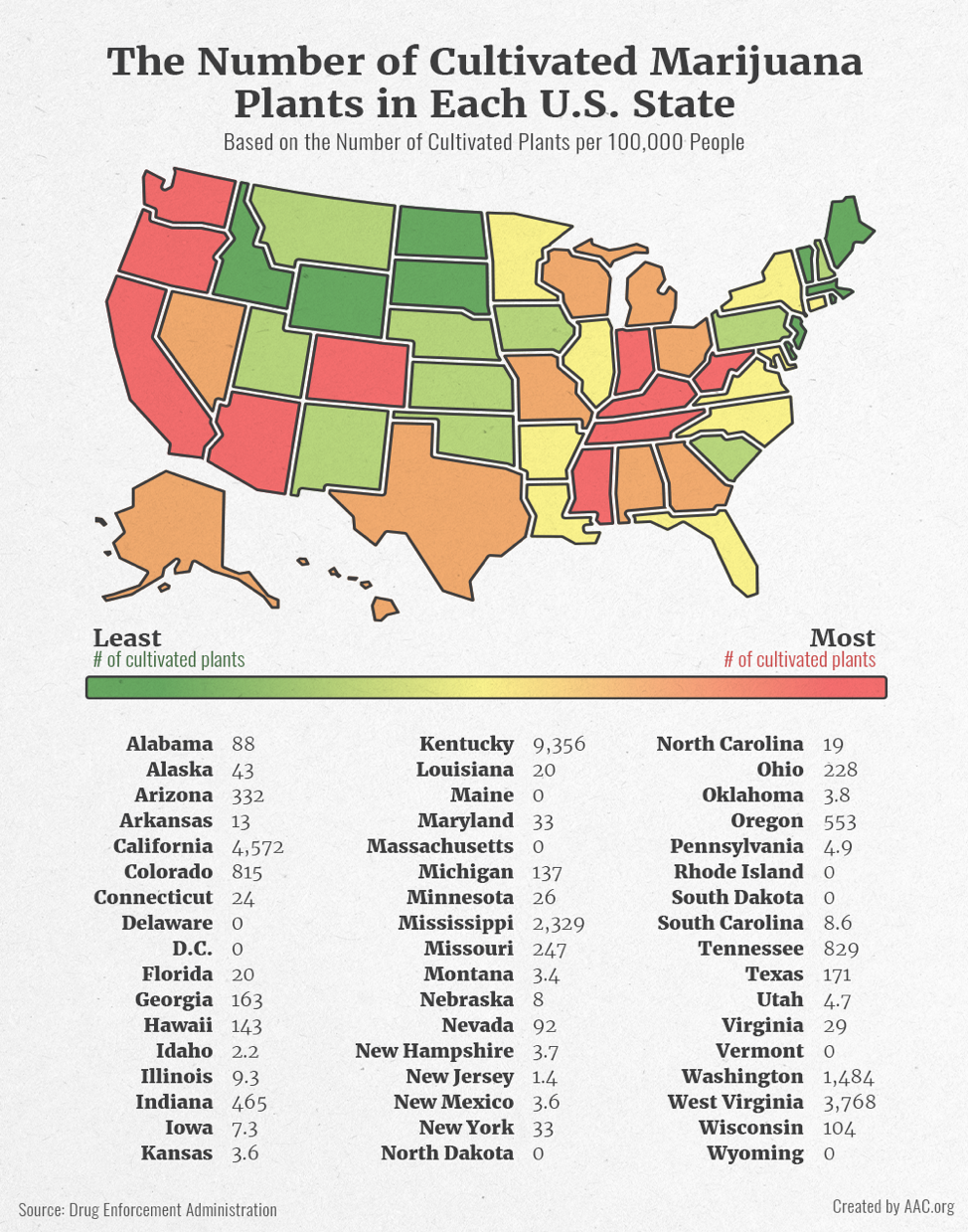 Cultivating over 9,300 plants per 100,000 people, Kentucky houses more marijuana plants than any other state in the nation. And given that both recreational and medicinal marijuana are illegal in Kentucky, this comes as somewhat of a surprise. In addition to Kentucky, California is also among the top states for marijuana cultivation. In fact, the state cultivates over 4,500 marijuana plants per 100,000 people in total. Which, when you consider the fact that California was the first state to legalize medical marijuana back in 1996, these findings make a lot of sense.

As for the states with the fewest cultivated plants, Massachusetts and Wyoming both cultivated zero plants per 100,000 people. They were followed by New Jersey, Idaho, and Montana – all of which cultivated less than three plants per 100,000 citizens. And while it makes sense that Wyoming, New Jersey, Idaho, and Montana, which don’t permit recreational marijuana use, cultivate the least cannabis in the country, we were surprised to learn that Massachusetts, where marijuana use is legal, made the list.

II: The Number of Eradicated Marijuana Grow Sites in Each U.S. State

Beyond marijuana plant cultivation, we also looked into the count of eradicated marijuana plants by state. Or alternatively put, the plants that were discovered and eliminated by local or national authorities. 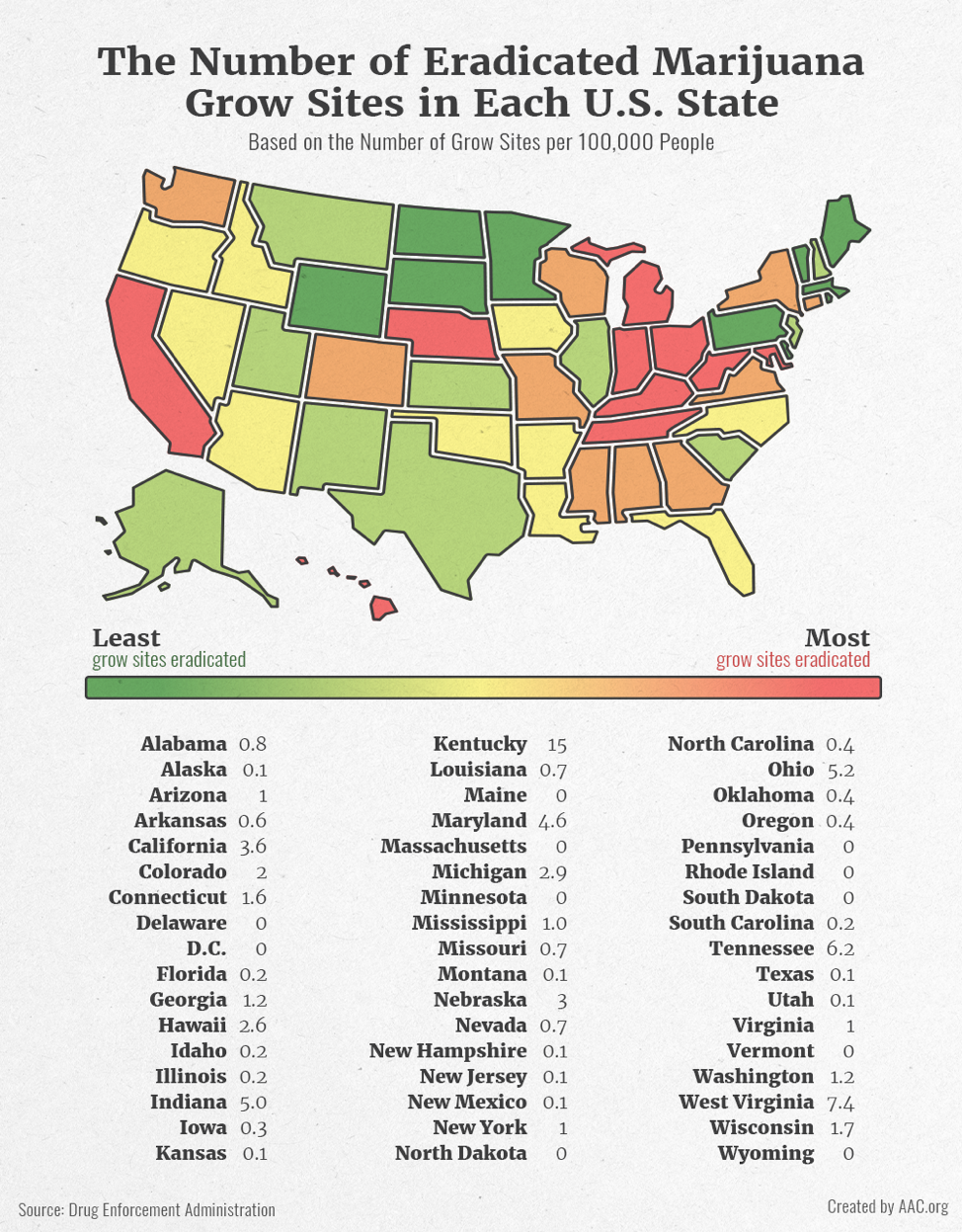 Not only is Kentucky the top state in terms of marijuana plant cultivation, it’s also the number one state for eradication. This indicates that the state’s aforementioned strict marijuana laws are likely well enforced. After Kentucky, West Virginia, Tennessee, Ohio, and Indiana have seen the most eradicated marijuana grow sites nationwide.

III: The Amount of Bulk Processed Marijuana in Each U.S. State

Do the states with the highest number of marijuana plants also house the most bulk-processed marijuana? We decided this was worth looking into. 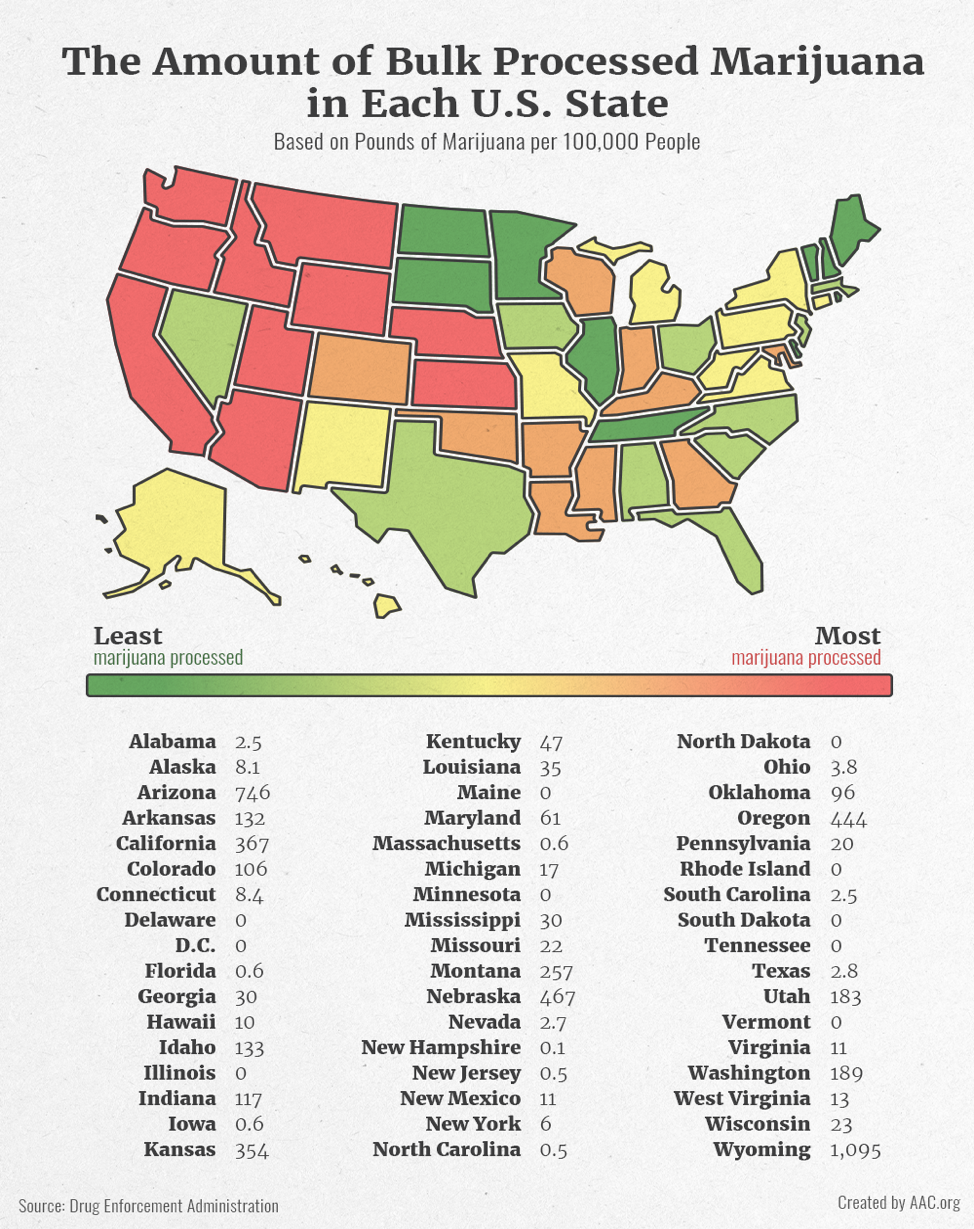 Given the lack of marijuana grow sites in Wyoming, and the state’s strict marijuana laws, we were shocked to learn that Wyoming actually has more bulk processed marijuana than any other state in the country. Though it’s difficult to say for sure, we suspect that the brunt of Wyoming’s marijuana is sourced from nearby states like Colorado, Oregon, and California, where marijuana use is legal, and grow sites are much more prevalent. And since these states have some of the highest rates of marijuana plant cultivation in the country, they certainly produce enough to meet both their own demand, as well as that of surrounding states with fewer grow sites.

IV: The Number of Marijuana Growth Related Arrests in Each U.S. State

Lastly, we were interested to see if our findings on cultivated plants, eradicated growth sites, and bulk processed marijuana, correlate with the quantity of marijuana growth-related arrests across the U.S.

Interestingly, Wyoming, Kansas, and Nebraska, which if you’ll recall, top the bulk processed marijuana list, also have significantly more marijuana-related arrests than other US states. What’s more, Kentucky, which was the top state in our cultivated and eradicated plants categories, also has the second-greatest count of marijuana-related arrests in the country. And these are just two examples of the general overlap we saw. 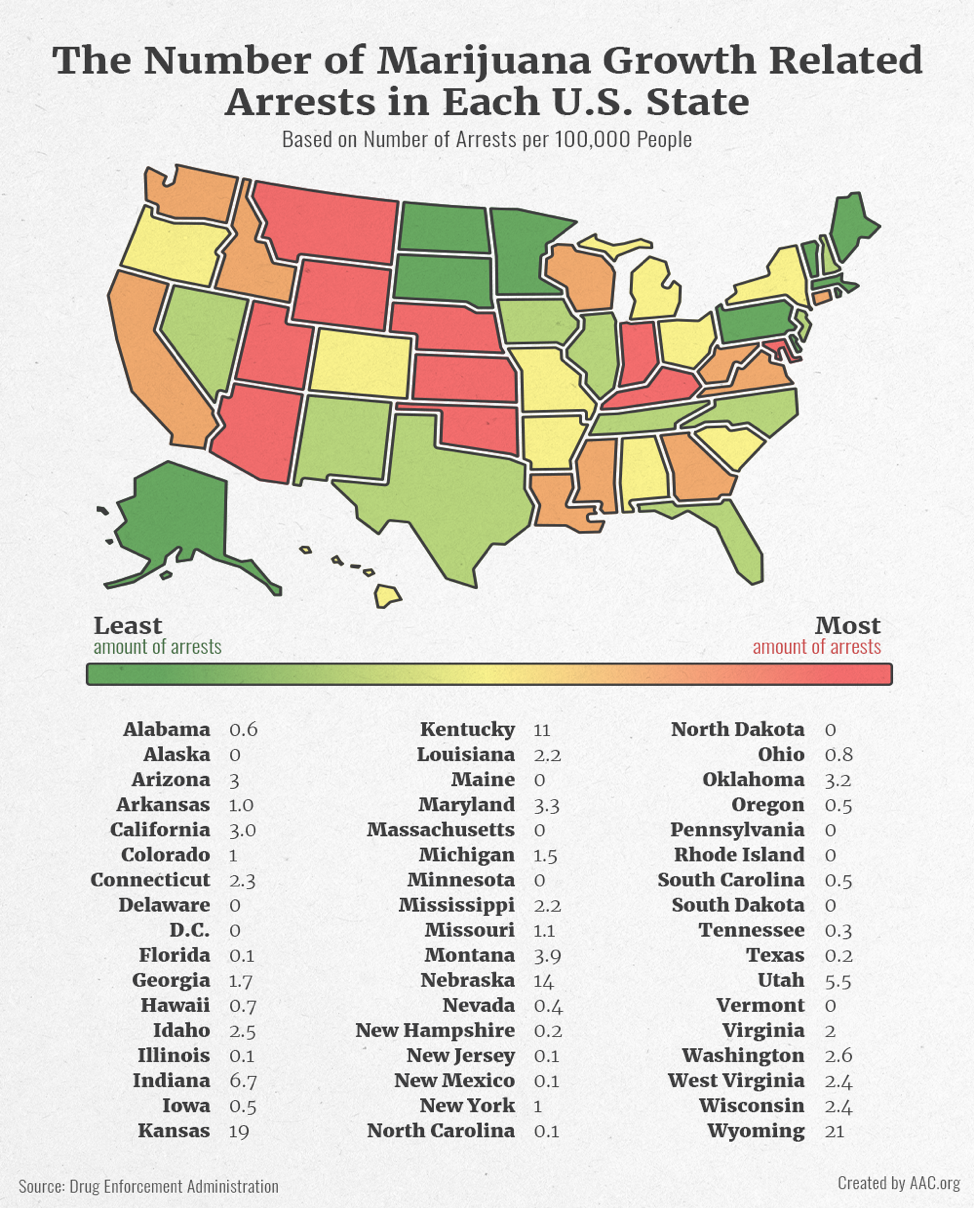 V: A Look at Marijuana Busts Across the US (Interactive Table)

If you’re like most people, you’re probably most interested in learning how this data pertains to you. You might be wondering: what’s the marijuana bust break-down in my home state? Well, we’re glad you asked. We decided to organize our data into the searchable table below with you in mind.

Select any of the columns headers to filter the data by category, and use the search bar to filter by state.

Although we found it very interesting to learn more about patterns in marijuana growth across the country, and are pleased to share our findings with you, we would like to remind our readers that drug use should not be taken lightly. If you, or anyone you know struggle with any form of drug addiction, we encourage you to seek help today.