The Connection Between Suicide and Binge Drinking Among College Students 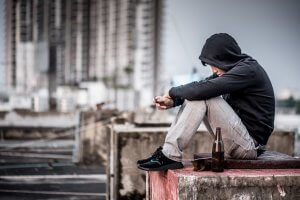 Binge drinking can lead to suicide in any age group, but college-aged adults are especially susceptible to this risk. Here are the key factors influencing binge drinking and the development of suicidal thoughts in college students, and the warning signs to watch out for.

College is a time of transition, a period during which many young adults embark on the journey towards adulthood. But with the added responsibilities of classes and career planning also comes a new sense of freedom associated with living on one’s own. College students are free to try new things, and for many this includes the consumption of alcohol. Unfortunately, this can often lead to alcohol dependency and binge drinking.

What is binge drinking?

Studies have shown that binge drinking in the U.S. is most prevalent among young adults (18–34).² So how common is binge drinking on college campuses?

There are many factors that influence the high rate of binge drinking among college students. These include increased social pressures to drink, the presence of fraternities and sororities, stress related to classes and grades, unstructured time, dorm living, relationship issues, and the widespread availability of alcohol. Regardless of the reasons why college students binge drink, the truth of the matter is that binge drinking poses many serious risks and consequences. These include:

The Link between Alcohol and Suicide

Alcohol and suicide are tragically related. People experiencing suicidal thoughts often turn to alcohol for comfort, and alcohol has the unfortunate effect of increasing suicidal attempts. According to data from a recent National Violent Death Reporting System report from the Centers for Disease Control and Prevention, alcohol has been a factor in nearly one-third of all suicides.7 Alcohol is a double-edged sword when it comes to its influence on suicidal tendencies; it decreases one’s inhibition and self-esteem, while at the same time enhancing negative self-image, impulsivity, social isolation, and depression.

Suicidal thoughts may develop in college-aged adults for several reasons. Many of the same factors that influence binge drinking also increase the risk of suicide. Factors for suicide in college students include mental health issues, relationship issues, loneliness, homesickness and culture shock, and academic and work-related stress.10 If you are concerned about someone, there are common warning signs to keep in mind. Some signs of suicide to watch for include:

If you are having suicidal thoughts seek immediate assistance by contacting mental health services at your school or calling the National Suicide Prevention Lifeline (1-800-273-TALK), which will connect you to the nearest suicide prevention and mental health service provider. It is then imperative to address any struggles with binge drinking and alcohol dependence by seeking treatment at a substance abuse rehab center.

Michael Kaliszewski, PhD
Medical Reviewer
Dr. Michael Kaliszewski is a freelance science writer with over 15 years of experience as a research scientist in both academia and industry.
Read Our Editorial Policy
Recent Posts
Don’t wait. Call us now.
Our admissions navigators are available to help 24/7 to discuss treatment.
Prefer texting to talking on the phone? We’ve got you covered 24/7.
Instead, sign up for text support to receive: