The Science Behind Alcoholism

Drinking is a socially acceptable activity in which to partake. A beer with friends while watching a game. An occasional glass of wine with dinner and loved ones. Rubbing elbows with colleagues or business associates at “Happy Hour.” Scenarios that are legal and acceptable, contingent there’s no underage drinking. However, an individual facing alcoholism, or an alcohol use disorder, who may be struggling to remain sober, may find one or each circumstance overwhelming or even triggering.

Gill speaks openly about her experience with alcoholism while coming from a place of humility, empowerment, and authenticity about her path to recovery.

So, be sure to watch this Addiction Talk episode entitled: “When the Chemicals React: ‘Sober Powered’ by Science.”

And if you’re struggling with alcohol use disorder, resources are available. As a nationwide leader in addiction treatment, AAC provides medical detox, outpatient and inpatient care, as well as aftercare planning. Please reach out to get the help that you need.

“The moment that I realized that alcohol was a problem was when I noticed that my tolerance increased. It was two years into 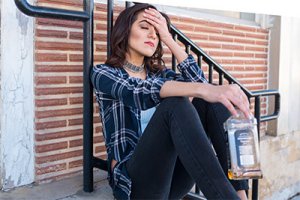 my drinking—and I was a teacher at the time—so, I was drinking every day to cope with the stress of teaching,” admits Gill Tietz.

Alcohol use disorder hinders an individual’s ability to control or stop their alcohol use. This is regardless of negative health, social, or even occupational repercussions.

Sometimes, as in the case with Gill, she didn’t realize at first that she was drinking to the point where it was a problem.

The Sober Powered Podcaster candidly shared, “I would drink these things that I would call “cosmos.” And they were like a pint glass, and it was almost all vodka—like almost the whole drink was almost all vodka. And about halfway through the school year, I started drinking two of them and then I would get very drunk every night. And I realized one night, this is a lot of alcohol. Like you are consuming a ton of alcohol every day. And that was the moment that I realized it.”

Gill Tietz experienced the dangers of alcohol that many have. She initially thought drinking would help her to “fit in with everyone.” Growing up, she observed her parents using alcohol in order to cope with an unhappy marriage. And she then used alcohol at age 22 to cope with her own childhood trauma from years prior.

But after realizing she had a problem and working through that process, she not only walked along her path to recovery, but she’s giving back to help others.

To learn more about Gill Tietz and her journey towards sobriety, please watch this episode of Addiction Talk. And if you find yourself battling with alcohol misuse, please reach out for the help that you need today.

Nitara Osbourne
Author
Nitara Osbourne, M.Ed., is an award-winning writer and Content Specialist at American Addiction Centers.
Read Our Editorial Policy
Recent Posts
Related Tags
alcohol use disorder
Don’t wait. Call us now.
Our admissions navigators are available to help 24/7 to discuss treatment.
Why call us?
Prefer texting to talking on the phone? We’ve got you covered 24/7.
Instead, sign up for text support to receive: