The Dangers of Huffing Paint: Effects on the Brain and Body 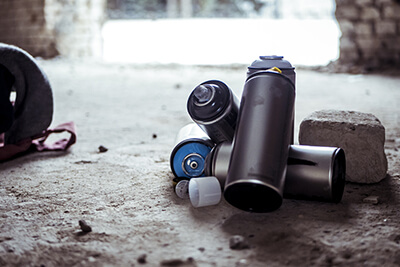 Many parents are appropriately concerned about illicit drug use in their children; however, they may be overlooking potential dangers as a result of the abuse of common household products. The National Institute on Drug Abuse (NIDA) and the Substance Abuse and Mental Health Services Administration (SAMHSA) define inhalants as substances that are used to achieve a number of different psychoactive effects (e.g. “getting high”), but these substances are not primarily designed to be ingested in any manner. Inhalant abuse involves a large category of household products that can be purchased by nearly anyone, including aerosols, solvents, cleaners, etc.

NIDA and SAMHSA data from 2015 indicate that use of inhalants is still of concern, although there may be a downward trend in such use.

These trends represent a decrease in past-year and past-month use over most of the age groups surveyed; however, use levels still remain concerning. The most concerning aspect of the data indicates that the vast majority of individuals who continue to use inhalants are under the age of 18.

The process of “huffing” typically involves putting the substance (e.g., paint) in some type of container, such as a bag, and then rapidly breathing in the fumes to achieve their psychoactive effects. Because these psychoactive effects are often very short-lived, individuals will continue to “huff” the fumes in order to extend the effects. The data from SAMHSA also suggests that younger individuals (under the age of 17) are more likely to inhale products like paint, paint thinner, etc., and older individuals are more likely to inhale products with nitrous oxide in them.

According to NIDA and the United States Drug Enforcement Administration (DEA), there are various effects on the body due to huffing.

An early study reported in the Journal of Abnormal Psychology compared 20 individuals who had a history of huffing paint with 20 matched controls on a number of various cognitive (neuropsychological) tests. Findings indicated that the individuals who had a history of sniffing paint performed significantly worse on measures of motor speed, set shifting, attention, and memory. The effects also indicated that a longer duration of huffing/sniffing paint fumes (i.e., those with long-term abuse issue) was associated with more severe impairments on these measures. This suggests that individuals had experienced significant alterations in their brains as a result of this substance abuse.

A review article published in the Journal of Alcohol and Drug Research investigated the effects of inhaling toluene, a chemical that is commonly found in a number of products, including paint thinner and paint. The findings indicated that long-term effects included:

NIDA also reports that damage to a number of areas of the brain is observed in individuals who have chronically inhaled substances, such as paint and paint thinners.

Because the effects of sniffing paint dissipate very rapidly, some individuals begin to “huff” repeatedly for lengthy periods in an effort to extend the psychoactive effects. This can be a potentially dangerous practice. A syndrome known as sudden sniffing death syndrome has been known to occur to some individuals who are otherwise relatively healthy but sniff pain and other inhalants for long periods of time. This can even occur in individuals who are not regular inhalant abusers. Death typically occurs as a result of an overdose to the chemicals in the fumes that lead to cardiac failure.

Abusing inhalants such as paint can also lead to fatalities as a result of:


Substance Use Disorders as a Result of Huffing

Editorial Staff
Author
The editorial staff of American Addiction Centers is made up of credentialed clinical reviewers with hands-on experience in or expert knowledge of ad … Read More
Read Our Editorial Policy
Related Topics
Related Tags
inhalants
Are you covered for addiction treatment? Find your insurance.
Check My Insurance
Do you have insurance?
Don’t wait. Call us now.
Our admissions navigators are available to help 24/7 to discuss treatment.
Get addiction help now (24/7 helpline)We’re here for you every step of the way.