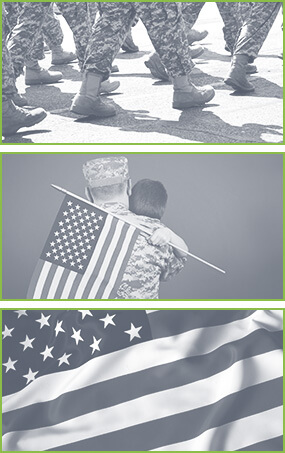 For many people, the American flag is a symbol of freedom. Unfortunately, for some of our nation’s veterans, protecting and fighting for that freedom has come with a price. About 11-20% of recent service era veterans suffer from PTSD, 27% of veterans diagnosed with PTSD also have substance use disorder, and the suicide rate for veterans is 1.5 times higher than the general population.

Mental health conditions among veterans often go unreported. According to research in the Journal of Veterans Studies, a common byproduct of military culture is that those struggling with psychological issues, including addiction, resist seeking help. Many are afraid that asking for help may have many negative effects.

Dr. Paul Little, an Air Force veteran, is on a mission to share his story in hopes of giving other veterans the courage to get help. His message has been featured in several publications, including, Fox News, Air Force Times, and Stars and Stripes.

While enlisted, Dr. Little developed an addiction to prescription pain medication. Wanting to address the issue, he informed his commander and was subsequently ‘punished.’ He was eventually discharged, which was a common response at the time.

After his discharge, Dr. Little sought treatment, began a new life in recovery and shifted his career focus to addressing addiction. A significant portion of his career has been dedicated not only to treating the disease, but encouraging other veterans to not be afraid to reach out for help.

“For military veterans there’s a sense that addiction equal weakness, failure or a lack of morals, and for years it’s been ‘treated’ with punishment,” said Dr. Little, the medical director of Laguna Treatment Hospital. “The good news is that today, veterans have much better access to care.”