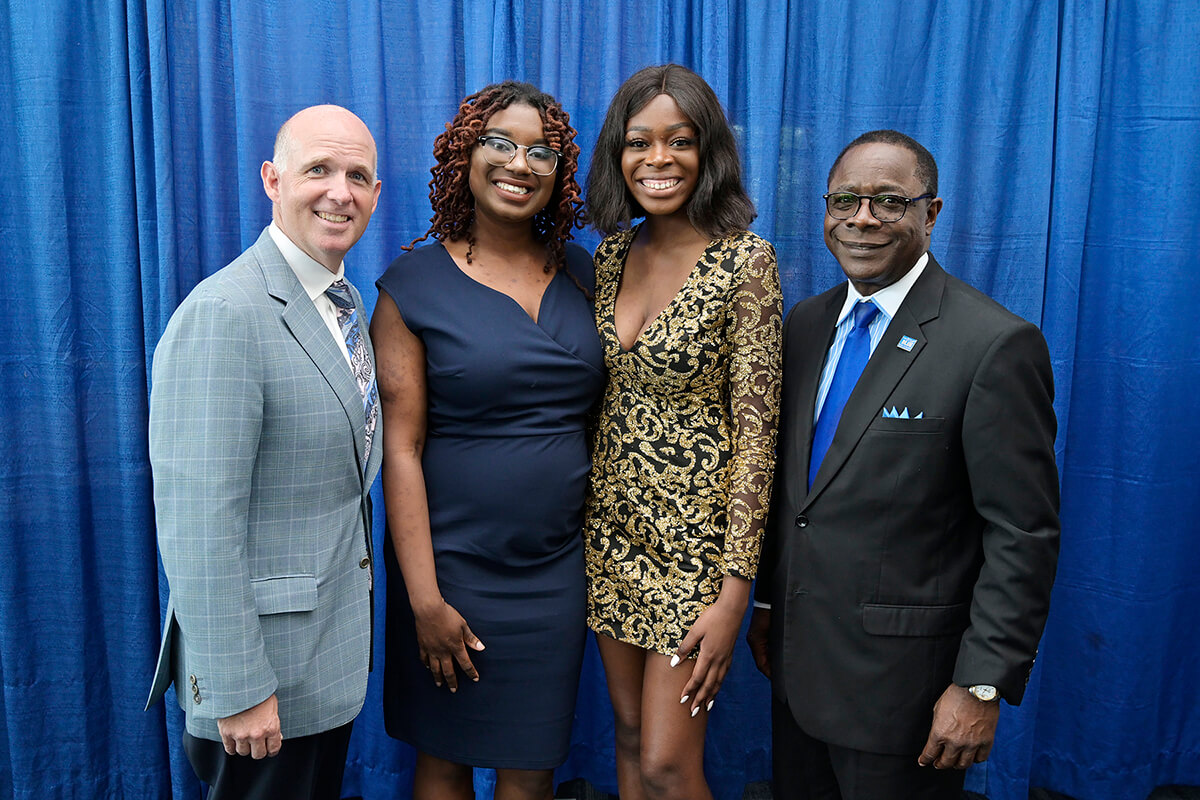 Businessman Michael Cartwright, left, chairman and co-founder of American Addiction Centers, joins Whitney Curtis, Emily Mckenzie and MTSU President Sidney A. McPhee in celebration of the two May 4 graduates as the first Cartwright-Coakley Scholarship recipients to graduate from the university. Curtis and Mckenzie will return to their native Great Exuma in The Bahamas to work and, hopefully, inspire others to want to improve living conditions in their hometown. (MTSU photo by Andy Heidt)

Whitney Curtis and Erin Mckenzie received a life-altering education from Middle Tennessee State University, thanks to a one-of-a-kind Cartwright-Coakley Scholarship.

Curtis and Mckenzie are the first two MTSU graduates of the scholarship, which was established in 2015 by Michael and Tina Cartwright of Franklin, Tennessee, helping students from L. N. Coakley High School in Great Exuma in The Bahamas receive a college education at MTSU and then return to work and be leaders in their town with a population pushing past 7,000.

A behavioral health businessman and former MTSU student, Michael Cartwright is chairman and co-founder of the Brentwood, Tennessee-based American Addiction Centers. The Cartwrights established a $600,000 scholarship fund that he said has grown to nearly $1 million to fully cover six scholarships for tuition, housing and other expenses.

“We committed to get six people educated and have them return to Great Exuma,” Cartwright said of the endeavor. “Erin and Whitney are the first two graduates, we have two more next year and two more coming after that.”

“Our goal is to have all of them graduate (from MTSU) and come back to Great Exuma and help with the schools or in social work, and help the local population,” he added.

Led by university President Sidney A. McPhee, MTSU hosted a midday luncheon for Mckenzie and Curtis during the Saturday, May 4, commencement. Alexander Cartwright, a University of Washington computer engineering student and the Cartwrights’ son, joined his father and an uncle, Wallace Cartwright, in attending the event and university commencement.

Michael Cartwright said a second luncheon celebration for the two and their families will be held Saturday, May 11, in Great Exuma, which is 120 miles south of Nassau.

McPhee, a native of the Bahamas, applauded the Cartwrights for their ongoing commitment to the island nation through the special scholarship, which not only opens doors for the student recipients but also has the potential to make a lasting impact on the Bahamian community.

“I was thrilled to see these first two graduates walk across the Murphy Center stage to receive their degrees, but knowing they are returning to their home country to begin their professional careers is an added bonus,” McPhee said.

“Higher education can be a game-changer and MTSU is honored to be a part of this effort to improve lives and communities from a global perspective.”

Mckenzie, 20, graduated with a bachelor’s in accounting and double minor in business administration and environmental science and technology.

“Graduating from Middle Tennessee State University has been the proudest moment of my life thus far,” Mckenzie said. “Being a recipient of the Cartwright Scholarship has changed my life, not just academically, but also culturally.”

“Moving from an island of 7,000 people to a school of 23,000 people … my eyes were opened to a totally new culture, which at first was overwhelming, but I eventually grasped the opportunities and used it to my advantage.”

Mckenzie said the Cartwright Scholarship “allowed me to meet some incredible people while becoming a part of the Caribbean Students Association, Sigma Gamma Rho Sorority Inc. and Scholars Academy — creating friendships that will last a lifetime.”

“I’m so thankful to have been awarded this amazing opportunity for higher education,” she added. “Mr. and Mrs. Cartwright are a godsend. … If I could have a redo, I wouldn’t do anything differently. I loved being a Blue Raider.” From athletics to campus events, she enjoyed the total experience.

“I always heard that college will be the best four years of your life and the time I spent at MTSU proved that saying true,” she said.

After completing the Certified Public Accountant exam, Mckenzie said she will return to Exuma and work as an accountant for the Cartwrights.

“I also will become a Youth Ambassador on my island by using my experiences to motivate and inspire the next generation,” she added.

Cartwright said Mckenzie and Curtis, who earned her degree in social work, will receive a $40,000 annual salary for their jobs, working in their community and making Great Exuma a better place to live.

The Cartwrights discovered Great Exuma years ago, have a home there and it’s where they plan to retire “and give back to that community,” he said.

Tourism brings visitors to the remote island’s resorts, but the people aren’t aware of the desperate needs (no running water in the inner city, run-down school, environmental science cleanup of the corals and so much more), Cartwright said, adding “it would make you cry” to see many of the conditions.

“You don’t see a lot of people helping Great Exuma,” he said, adding he hopes his and his wife’s efforts “inspire others to get involved. … Volunteers are needed. You don’t have to give money to give back. You can be a part of Meals on Wheels or pick up trash.”

For Cartwright, whose wife earned a master’s degree from MTSU, it’s all about “furthering the mission of what MTSU is all about.”

“Anything we can do to help Dr. McPhee build a world-class university and to get them (Coakley students) to have a chance in this world” is what the opportunity is all about, he said.

Increasing international enrollment at MTSU has been a priority for McPhee.

MTSU has more than 300 combined undergraduate and graduate programs.

AAC Director of Brand and Design in Fierce Healthcare