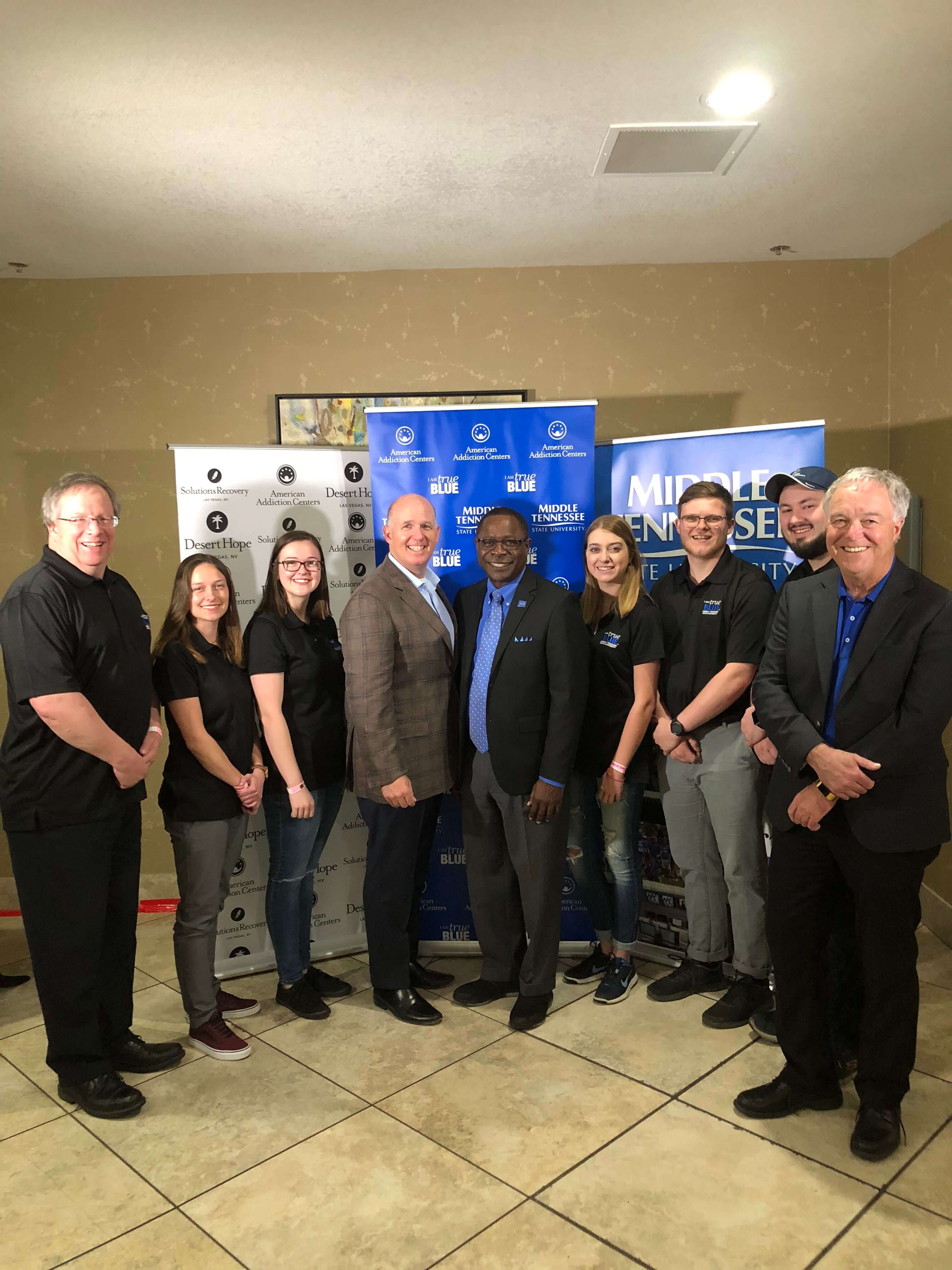 A select group of Middle Tennessee State University students and faculty are getting a behind-the-scenes look at this weekend’s activities with the Academy of Country Music thanks to the support of American Addiction Centers (AAC).

AAC’s support of the MTSU College of Media and Entertainment’s team in Las Vegas marks the second time this year that the company has aided the university’s efforts to provide experiential experiences to students interested in the Recording Industry, Media Arts and Journalism. AAC also helped sponsor MTSU’s student and faculty work earlier this year at the 60th annual GRAMMY Awards in New York City.

“Our company is proud to support Dr. McPhee’s commitment to provide top-notch experiences for its students at the ACMs and the GRAMMYs,” said Cartwright, who attended MTSU as an undergraduate. “We’re both based near Music City, so we both appreciate the important role that country music and the recording industry plays in Nashville and around the world.”

“Thanks to support from great alums like Michael Cartwright, as well as ACM CEO Pete Fisher, MTSU offers students many experiences that other institutions only talk or dream about,” McPhee said. “This trip will be a defining moment in the lives of these students.”

AAC’s support, McPhee said, allowed Pittard to bring five students and a faculty mentor, Assistant Professor Robert Gordon, to shadow the ACM’s preparations for Sunday’s national telecast of the 53rd awards, which will honor and showcase the biggest names and emerging talent in country music. The students also visited the National Association of Broadcasters conference in Las Vegas just before the ACM weekend’s activities.

Also, Keel will host a “Change the Conversation” event in Las Vegas on Saturday, the day before the ACMs, on gender inequality in country music. In 2014, Keel formed the group with other women on Music Row were worried about the increased difficulty of getting women played on country radio, signed to record companies, or booked on some high-profile events.

“This trip is an opportunity for some of our top Media Arts students to engage with a national entertainment event, just as our recording Industry students participate in the Grammy Awards each year.” said Paulson. “This builds confidence and provides invaluable perspective on how the best in the business do their jobs.”

Cartwright and McPhee, meanwhile, also announced Friday that AAC’s contribution of student-centric information about substance abuse prevention and treatment that MTSU will provide students through the university’s Health Promotion Office.

“Education is the most effective deterrent to substance abuse,” Cartwright said.

The information, which will be posted MTSU’s website and provided in print formats, was written by AAC’s Lauren Villa, who served as program director for a community-based HIV/AIDS and cancer non-profit in San Francisco.

“This objective, and provider-agnostic, material will be a great resource to students seeking answers to challenging questions,” McPhee said.