The U.S. Bureau of the Census estimates that there are 44 million people of African origin living in the country, comprising 13.4% of the total population.1 African Americans are overrepresented among drug abusers in the United States, but they are also more likely to seek treatment for their drug addiction.

The rates of substance abuse among African Americans are similar to those of the general population, although there are some slight differences. Findings from the 2018 National Survey on Drug Use and Health include:2

Although the rate of cocaine use among the African American population is much lower than the rest of the country, it is important to note that this statistic includes the use of both powder and crack cocaine.

Studies examining the use of specific forms of cocaine show that African Americans are more likely to use crack than any other ethnic group in the United States. A recent study indicates a much higher rate of lifetime crack cocaine use among African Americans (4.6%) compared to Caucasians (3.7%) and Hispanics (2.3%).3 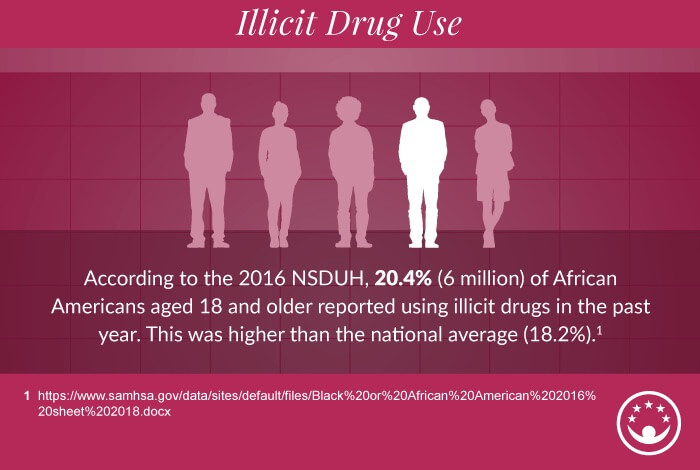 Differences in Substance Abuse Patterns Across the Black Population

A recent study determined that there are differences in the patterns of substance abuse and dependence between African America and Caribbean Blacks. Some of the findings from this analysis include:4 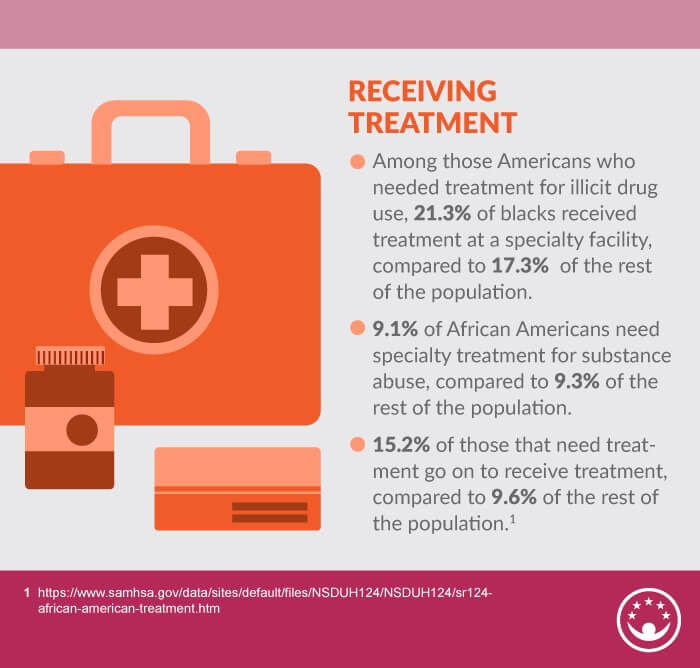 The Substance Abuse and Mental Health Services Administration reports that African Americans are just as likely to need substance abuse treatment as any other population. A recent study found that 9.1% of African Americans and 9.3% of persons from other racial and ethnic groups are in need of treatment for drug or alcohol use.5 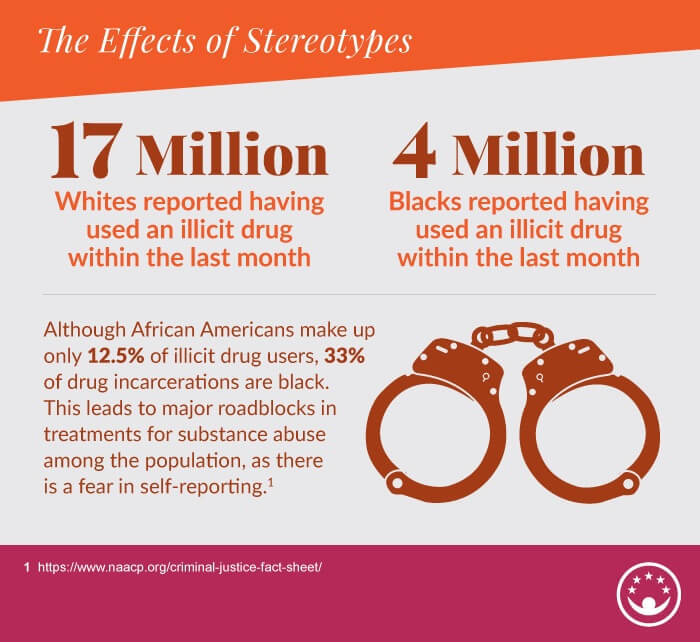 Unfortunately, research also shows that African Americans have lower rates of recovery from drug addiction following treatment.6 To better meet the treatment needs of the African American community, there are several social and cultural factors that should be considered. These include:

Cultural differences between providers and program participants can easily undermine the reception of treatment. A multicultural staff is most effective in providing substance abuse treatment, and programs treating African Americans benefit from having someone of color represented on the treatment team.7

Programs should be provided in facilities that are easily accessible to the client. Studies have found that lack of transportation is one of the top reported barriers to treatment for African Americans.7

Michael Kaliszewski, PhD
Medical Reviewer
Dr. Michael Kaliszewski is a freelance science writer with over 15 years of experience as a research scientist in both academia and industry.
Read Our Editorial Policy
Related Topics
Don’t wait. Call us now.
Our admissions navigators are available to help 24/7 to discuss treatment.
Get addiction help now (24/7 helpline)We’re here for you every step of the way.