How Long Does Ritalin Stay in Your System?

Ritalin is a brand name for the drug methylphenidate, which is one of the approved treatments for attention deficit hyperactivity disorder (ADHD). Ritalin can also be used to treat the sleep disorder narcolepsy, a disorder where a person has problems staying awake during the day.

The peak effects from central nervous system stimulants are typically felt quickly and then dissipate rapidly. The immediate-release form of Ritalin lasts about 4–6 hours before person needs another dosage, whereas the extended-release forms of methylphenidate like Concerta may last anywhere from 10 to 14 hours.

How Long Does Ritalin Stay in Your System?

Ritalin does not tend to accumulate in the cells of the body in the way that some other drugs do, as it is water-soluble. The ability of an individual to eliminate methylphenidate through urine can be quite variable from person to person. Some people can eliminate nearly 100 percent of the drug within one or two days, whereas others may only eliminate 75 percent of the drug over the same period of time. The following chart shows how long Ritalin is detected in your body through various drug test types:

Again, the active ingredient in Ritalin is methylphenidate, a central nervous system stimulant. Central nervous system stimulant drugs typically have very short half-lives compared to other drugs, and they have a quick onset of action. The half-life of a drug is the time it takes a person’s system to break down the concentration of the drug to half its starting concentration. The half-life of methylphenidate ranges from 1-4 hours.

Factors Impacting How Long Methylphenidate Stays in the Body

The most salient factors that influence how long methylphenidate remains in a person’s system include:

Other factors that can influence how long Ritalin is detectable in a person’s body after they have taken the drug can include food intake and hydration, which can increase or slow down the absorption of the drug and its release in the system. Taking methylphenidate orally with a high-fat meal will result in slower rate of absorption for the drug, whereas hydrating oneself thoroughly after taking the drug may slightly increase the metabolism of the drug.

The time that the drug remains in the person’s system can also depend on the type of methylphenidate taken. For instance, taking an extended-release form of methylphenidate will result in the product being released more slowly in the person’s body. This means that the drug may be detectable for a longer period of time than immediate-release forms of the drug if the medication was taken orally.

Use and Abuse of Ritalin 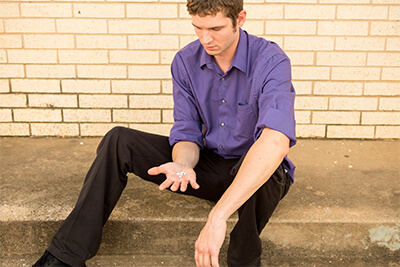 Methylphenidate products are listed as controlled substances according to the United States Drug Enforcement Administration (DEA). All products with methylphenidate are classified in the Schedule II classification, the highest level of control for any drug that can be obtained with a prescription from a physician. This indicates that the federal government considers methylphenidate to be a drug that has a serious potential for abuse and physical dependence, but also a drug that has useful medicinal applications. Thus, the drug is strongly controlled and can only be legally obtained and used while under the care of a physician.

In the case of ADHD, it is hypothesized that the brain of the person with the disorder is underactive in its resting state, and this leads to problems with attention and the need for a person to be impulsive or move around a lot in an effort to compensate for this underactive brain state. Research has indicated that children with ADHD who are treated with stimulant medications like Ritalin tend to have long-term outcomes that are positive in terms of their educational achievement and occupational achievement. They even have fewer issues with substance abuse than children with ADHD who do not get treatment.

Unfortunately, methylphenidate products like Ritalin are also significant potential drugs of abuse. They can be abused in numerous contexts, but perhaps the best-known context is the use of these drugs as cognitive enhancers or performance enhancers. For instance, high school students and college students may abuse the drugs by grinding up the pills, snorting the powder, and taking large dosages of the drug in an effort to study for exams or stay awake for lengthy periods of time. Other individuals who are employed in high-demand jobs may also use stimulants like Ritalin in an attempt to improve their performance at work and stay awake longer.

The reputation of Ritalin and other stimulants as cognitive or performance enhancers is somewhat overstated. Any stimulant, including caffeine, can improve attention and focus for a short period of time when taken in moderate to small amounts, but when these drugs are abused in large amounts, they actually have the effect of diminishing a person’s attention span. These drugs are not “smart drugs” in that they do not make individuals more intelligent. Research supports the notion that abusers of Ritalin and similar drugs typically have lower levels of academic and occupational achievement than people who do not abuse these drugs.

Editorial Staff
Author
The editorial staff of American Addiction Centers is made up of credentialed clinical reviewers with hands-on experience in or expert knowledge of ad … Read More
Read Our Editorial Policy
Related Topics
Related Tags
stimulants
withdrawal
Are you covered for addiction treatment? Find your insurance.
Check My Insurance
Do you have insurance?
Don’t wait. Call us now.
Our admissions navigators are available to help 24/7 to discuss treatment.
Get addiction help now (24/7 helpline)We’re here for you every step of the way.