Adderall vs. Vyvanse: What’s the Difference?

Vyvanse is not approved for use for children under the age of 6. Adderall is also approved to treat the sleep disorder narcolepsy, and Vyvanse is approved by the Food and Drug Administration to treat binge eating disorder in individuals over the age of 18.

Both drugs are classified as controlled substances by the United States Drug Enforcement Administration in the Schedule II category, indicating that they are at the highest level of control for drugs that can be obtained by people with a prescription from a physician. This means that the federal government considers both of these drugs to have a significant potential to produce physical dependence in people who use them and are high-risk potential drugs of abuse.

Adderall vs. Vyvanse: A Comparison

Based on information from the books Attention Deficit Hyperactivity Disorder Handbook: A Physician’s Guide to ADHD and Pharmacovigilance in Psychiatry, a brief comparison follows.

The drugs are both controlled substances, and as mentioned above, this means that they are believed to have a potential for abuse and the development of physical dependence. However, a prodrug like Vyvanse is inactive in the system until it is metabolized by enzymes in the body. Therefore, Vyvanse can only be taken orally, whereas Adderall can be ground up and snorted or mixed with water and injected. This means that the manufacturers of Vyvanse advertise it as being less likely to be abused. In addition, prodrugs like Vyvanse are believed to be absorbed much more efficiently and smoothly due to their biochemistry. When the drug wears off, it is believed to produce fewer negative effects (e.g., the crash that occurs from stimulants once a person stops using them).

The biggest differences between the two drugs are how they are metabolized by the body, how often a person needs to take them (especially in the case of the immediate-release version of Adderall versus Vyvanse), and their projected potential to be drugs of abuse.

Will My Doctor Prescribe Me Vyvanse or Adderall? 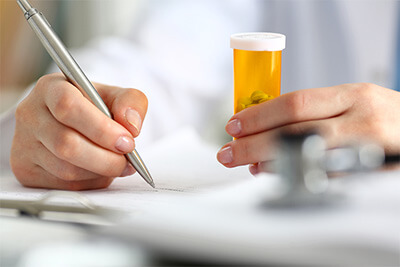 In rare cases, there is a potential risk for heart attack or stroke with any type of stimulant use. Physicians would consider the patient’s history and specific vulnerabilities, and based on the potential side effect profiles of each medication, decide which would be most appropriate. For instance, Vyvanse would be expected to have less intense side effects than Adderall in most cases. Therefore, a client who might be susceptible to problems with sleep, appetite loss, or anxiety might be more likely to be placed on Vyvanse than Adderall. Because Vyvanse is an extended-release version and has a slightly longer duration of medicinal effects, this could be a consideration for some physicians.

Both medications have different interactions with other types of medications and substances. Physicians typically review the list of medications the patient brings with them and then decides on the approach that would be less likely to produce a negative interaction with the current medication regime, or they may change some medications to allow for the prescription of the particular stimulant of choice.

Of course, the potential for abuse could also be a significant factor in the decision. For those who may be more prone to abuse stimulant medications, a physician may decide that Vyvanse is a better choice.

Finally, physicians often prescribe medications based on their own experience and knowledge. They may feel that they see better results with Vyvanse compared to Adderall or other medications. Very often, the chosen medication for treating a recently diagnosed condition in an individual boils down to a trial and error type of process. The physician prescribes the medication that they feel best fits the patient’s needs and then the patient provides feedback on how the medication is working and the side effects they are experiencing.