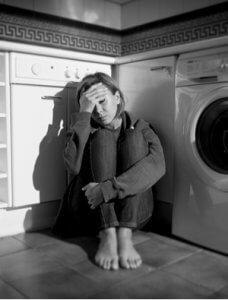 Women in today’s society are under more pressure to be everything to everyone than ever before. Over time the media, entertainment industry and our own personal experiences have shaped what we recognize and define as a suburban housewife. The compounding stress on these women, plus the societal pressures they feel often leads them to look for a way to alleviate physical and emotional stress through medical means. In fact, since the 1800s women have been prescribed increasing amounts of anti-anxiety or antidepressant medication to combat the stresses they are dealing with in their everyday lives.

The middle of the 20th century saw a dramatic uptick in the drug-based treatment of women and their perceived anxiety. Often referred to tongue-in-cheek as “Mother’s Little Helper,” medications like Prozac, Librium, Valium, and Miltown were dispensed often too frivolously instead of working to get to the root of the problem.

The tranquilizer, Miltown (meprobamate in generic form), is an anxiety-relieving drug known for its marked effect, was made commercially available in 1954 and was once one of the most popular prescribed medications. By 1956, “doctors had written 36 million prescriptions for it. At the height of its popularity, one out of every three prescriptions called for this drug.”1

Women’s Lives Have Changed – So Have Their Drugs

Nowadays, women have different lifestyles than generations before them. They are often juggling many different tasks while trying to maintain their family unit and their sanity day after day.

With societal pressure and the common misconception that women are more emotional than their male counterparts, women are targeted constantly with medication that will enhance their mood and help them function to society’s definition of what is proper. Over the years, the idea of psychiatric help understood in Freudian terms, became a hugely popular concern. Everyone thought they should be better adjusted at work and be more mentally healthy.2

This mentality has caused increases in abuse of prescription mental health drugs in this community and a movement into drugs outside of the mental health category for women who feel that they need something else to help them get through their day.

The Power and Perils of Opioids 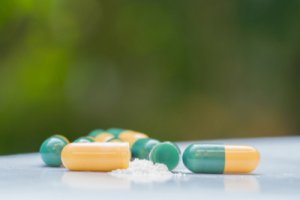 Currently, abuse of prescription painkillers by suburban housewives is greatly on the rise. According to the Centers for Disease Control and Prevention Suburban housewives in today’s society are turning to opioids on a regular basis to help them numb the pain they deal with day today. It typically starts innocently, surgery on a toothache, giving birth to a child, or a pinched nerve in the back. Doctors then prescribe opioid-based drugs that resemble opium in their physiological effects. Demerol, OxyContin, Percocet, Kadian, Actiq, and Vicodin are just some examples, typically designed to be taken on an “as-needed” basis and for a short duration. However, for some women, all it takes is one prescription, as their pain and anxiety fall away and the begin to feel normal again, the addiction begins.

For many, drug use invariably increases as tolerance to the opioid pain killer quickly builds up. For others, the injury requiring medication may last longer than first anticipated or become chronic. More of the drug is taken or it may be taken more frequently than prescribed. This leads the user to seek out even more of the drug to achieve a satisfactory effect. If they cannot get a prescription refilled, a crisis results. They may even start to look for other ways to alleviate pain, leading from use to misuse of stronger substances or medications used in conjunction with other substances such as alcohol, the once-familiar benzos from the past, or something even worse.

Notwithstanding a more demanding lifestyle with greater risks for pain, pain stemming from things as commonplace as dental procedures or childbirth sees physicians actively prescribing strong and potentially addictive drugs. When women can no longer acquire pain medications from their physicians, their need may lead them to find an alternative source on the street, not only for pain reduction but also for the euphoric feeling that comes with this type of drug.

Typically, this fix is found in heroin, a stronger and cheaper alternative to the pills they were once prescribed. A recent article in Marie Claire illustrates the story of one such woman,  “Donna.”

Donna started on the road to addiction by borrowing some of her husband’s Percocet pills to help with an old back injury. At $25 per pill, Percocet was pretty expensive for them. She found that she could purchase heroin on the street for much less. According to Donna, she realized that “she and her husband could split the $10 bag and feel the same euphoria as with two $25 pills. That’s $50 or $10—what would you spend?”4

The stories of women like Donna are not uncommon. A simple pain, a need for an escape from the stress of everyday life, and a search for a feeling of normalcy have suburban housewives looking to increasingly harder substances to find that feeling of relief.

If you or someone you know is struggling with opioids, there is help available for you. Seeking treatment can help restore your normal life and get you back to the woman you once were. Start your journey to recovery by calling (888) 997-2429.

Editorial Staff
Medical Reviewer
The editorial staff of American Addiction Centers is made up of credentialed clinical reviewers with hands-on experience in or expert knowledge of ad … Read More
Read Our Editorial Policy
Recent Posts
Don’t wait. Call us now.
Our admissions navigators are available to help 24/7 to discuss treatment.
Prefer texting to talking on the phone? We’ve got you covered 24/7.
Instead, sign up for text support to receive: