Americans’ Perceptions of Alcohol vs. Marijuana

In June 2018, Oklahoma became the 30th state to legalize marijuana for medicinal use. Nine states have also legalized cannabis consumption for recreational use. These occurrences may reflect a general shift in the public’s opinion.

While the Centers for Disease Control and Prevention (CDC) says people can’t ingest a lethal dose of marijuana, the legality of the substance might not tell the whole story. In fact, alcohol is legal in all 50 states but is responsible for 88,000 deaths every year and 2.5 million years of potential life lost.

In both cases, data leave out a critical consideration: addiction. We surveyed over 1,000 people about whether alcohol or marijuana is more dangerous and if either’s legal status should change. Read on as we explore their answers and the American attitude toward these substances.

Putting a Stop to Substance Use? 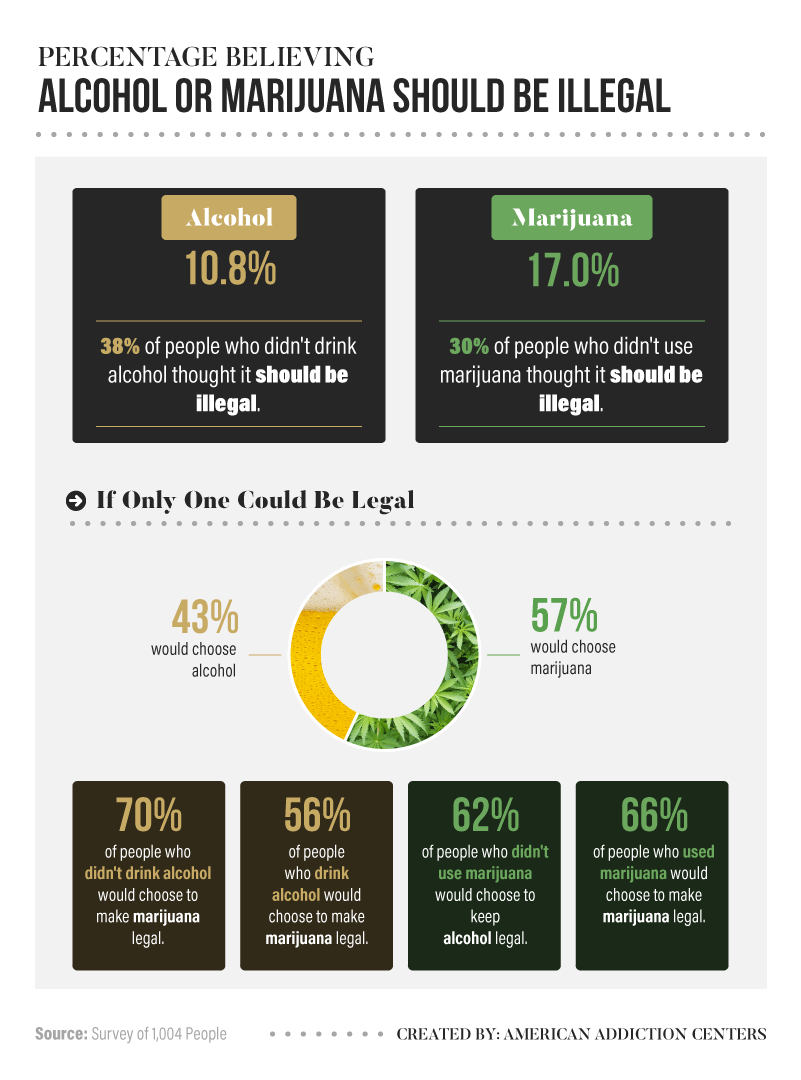 More than half of people would choose marijuana over alcohol if only one could be legal.

Even if ingesting marijuana isn’t deadly, it still can be dangerous. The short-term effects of THC, one of the chemical compounds of marijuana, can lead to altered moods, impaired body movement, and hallucinations. Even more concerning, the long-term effects of marijuana use can include damage to the brain. In addition to memory loss and cognitive decline, research is still inconclusive as to whether these effects are permanent. Nearly 2 in 3 people who used marijuana would choose to make it legal if given a chance.

Sixty-two percent of people who didn’t use marijuana would choose to make alcohol legal instead. Like cannabis, drinking alcohol has dangerous short- and long-term effects. Studies have shown drinking too much, either in a single instance or consistently over time, can severely harm the brain, heart, liver, pancreas, and can lead to several forms of cancer. 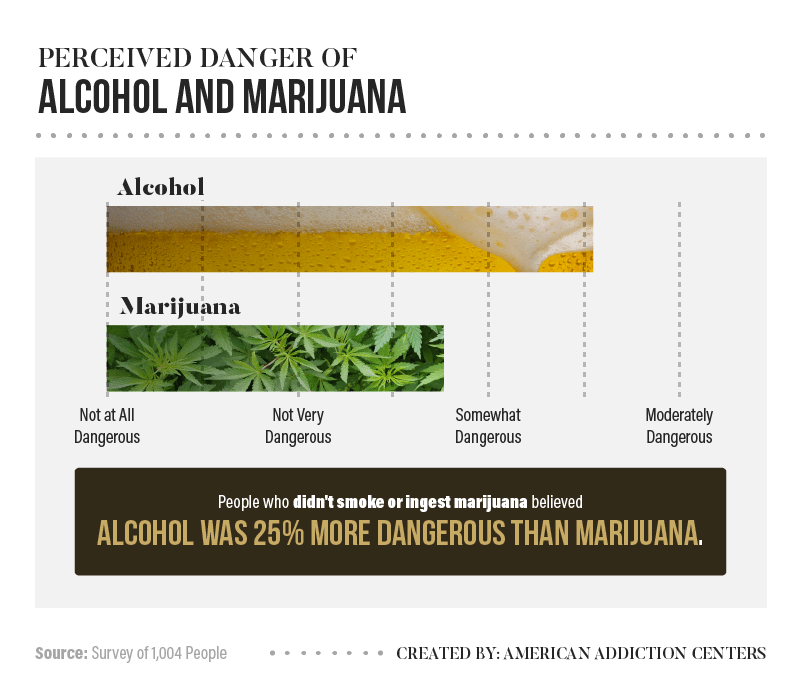 Next, we asked people to rank the level of danger associated with both substances. Most people opted to make marijuana legal if forced to pick between the two, and they considered alcohol a more dangerous substance on average. Alcohol was rated as being close to moderately dangerous compared to marijuana, which was somewhere between not very dangerous and somewhat dangerous. Comparatively, people who didn’t smoke or ingest marijuana believed alcohol was 25 percent more dangerous than cannabis. 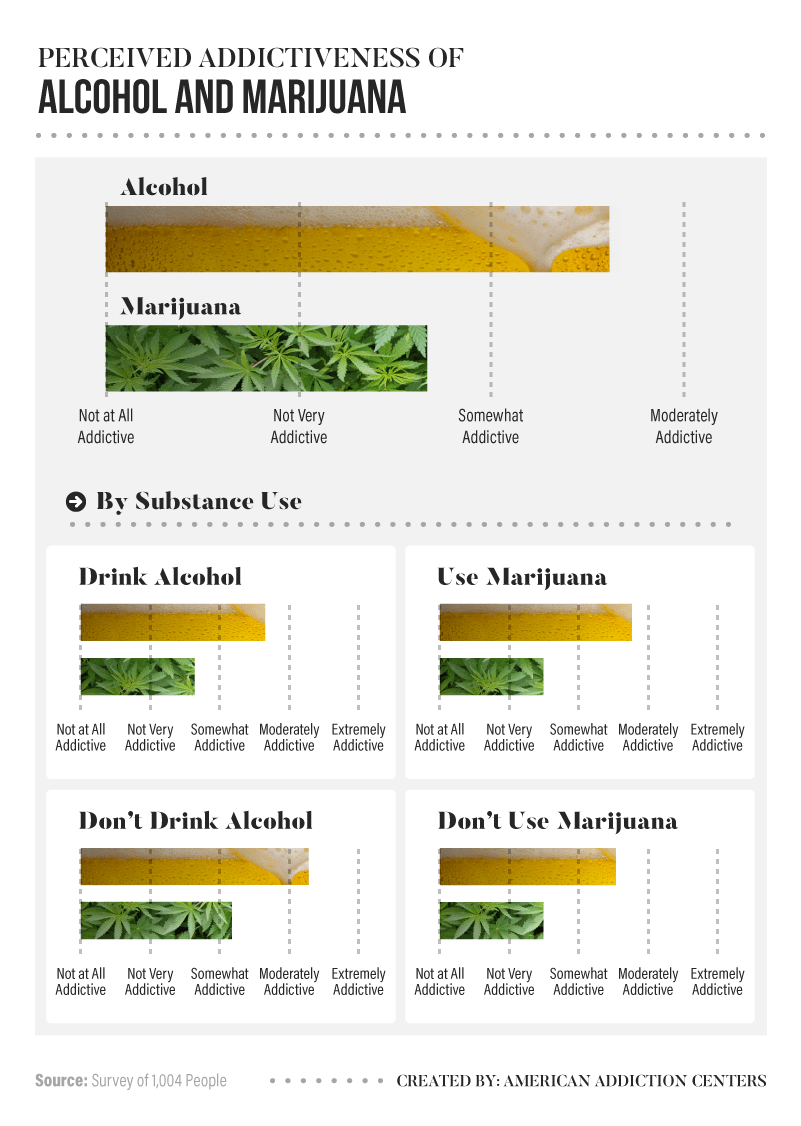 While marijuana isn’t a lethal drug, it does share similar qualities with other illicit substances. Despite it’s growing popularity and increasing levels of legality, there are dependency issues people pursuing marijuana for both medicinal and recreational use should be cognizant of. Research shows marijuana use disorders are associated with dependence and withdrawals that can make people feel irritable, tired, restless, and physically uncomfortable after discontinuing use.

However, alcohol was considered more addictive according to the men and women surveyed. In fact, respondents rated alcohol between somewhat and moderately addictive compared to not very or somewhat addictive for marijuana. While the perception of alcohol dependency was higher among people who didn’t drink alcohol, even people who consumed both alcohol and marijuana believed the addictiveness of alcohol was greater than that of marijuana. 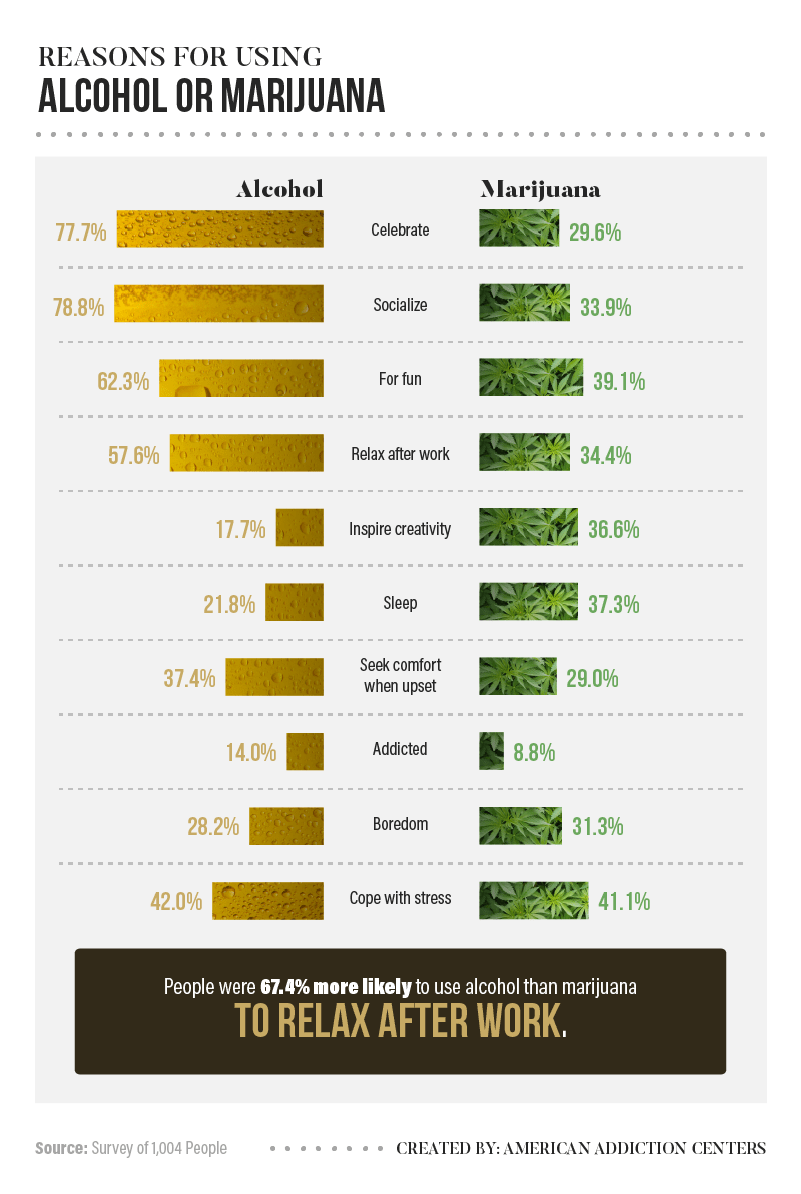 In contrast, alcohol was overwhelmingly linked to more social intentions. More than 3 in 4 people admitted to drinking when celebrating or socializing, and 62 percent said they drank to help make their experiences more fun. People were also over 67 percent more likely to suggest alcohol was a better outlet than marijuana for relaxing after work. While alcohol may provide an immediate sense of anxiety or tension relief, there are serious dangers associated with self-medication. Drinking alcohol has been linked to increased social anxiety disorder, panic attacks, and general dependence and addiction. 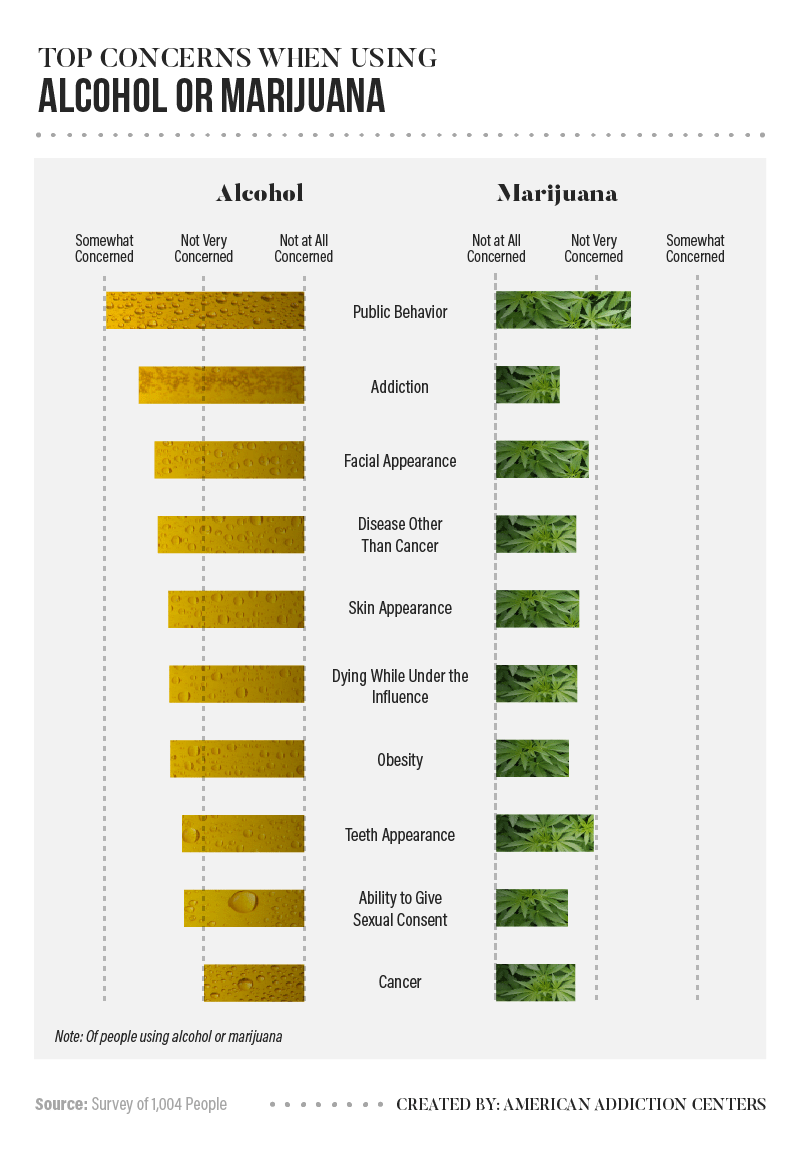 Alcohol consumption is linked to thousands of deaths every year, and marijuana and alcohol use can lead to harder and more deadly narcotics. But just how concerned are people when it comes to using either? As we found, the answer might not be much.

While men and women were more concerned with alcohol consumption in relation to addiction, appearance, or health, the most pressing concern was public behavior, which they were only somewhat concerned about. While excessive drinking has been somewhat pacified on social media or even in real-life social settings, drinking can be deceptively dangerous, and binge drinking has only continued to increase across America.

Actions Under the Influence 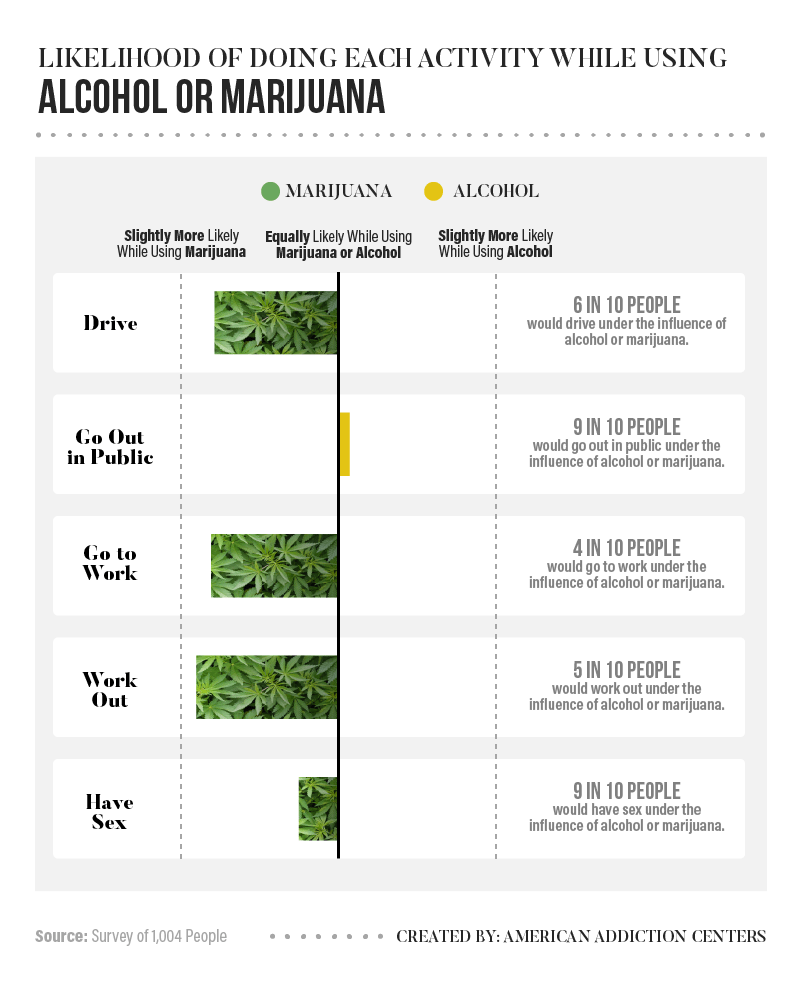 How appropriate do people think it is to do everyday activities while under the influence of either marijuana or alcohol?

Similarly, people were more likely to go to work after consuming marijuana compared to alcohol and more likely to have sex under the same circumstances. 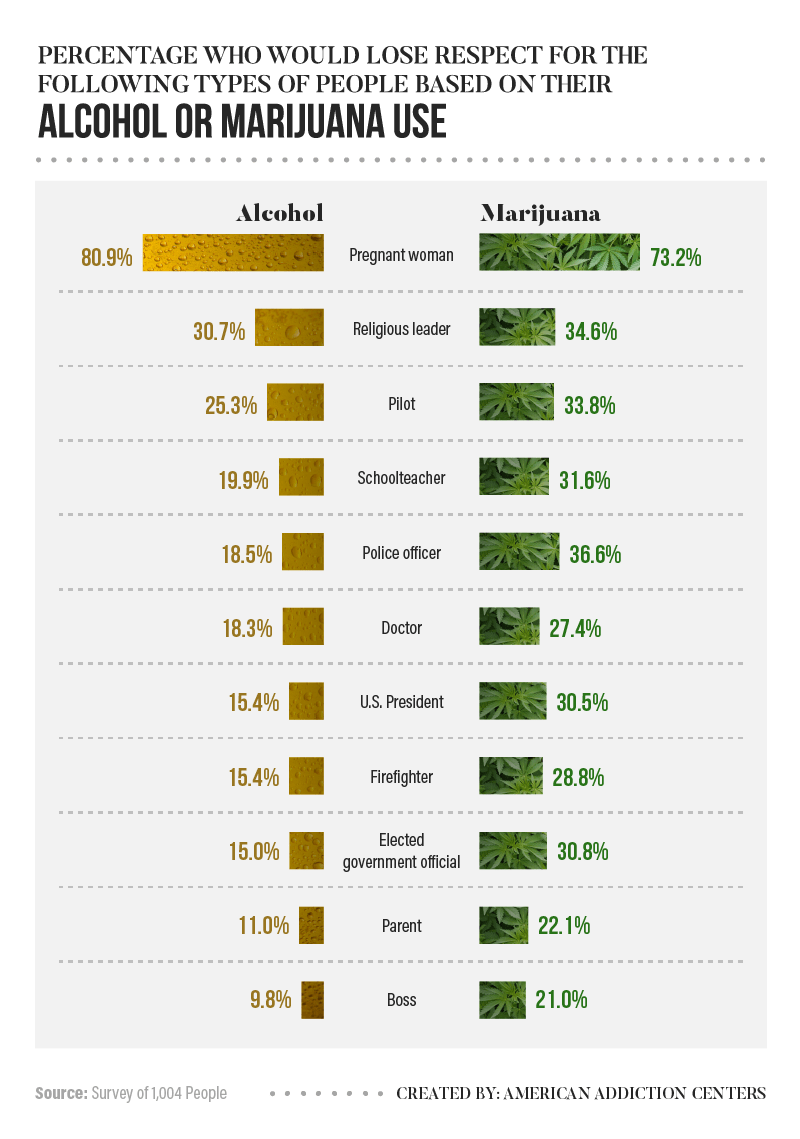 In most cases, the social stigma associated with marijuana was worse than with drinking alcohol.

The image associated with marijuana use is often of someone getting high or lounging around comatose. In reality, this impression can hurt people who use marijuana for medicinal purposes. With the exception of pregnant women, people admitted to having less respect for everyone from religious leaders to police officers and parents using marijuana compared to those who drank alcohol. Even though it’s not entirely unheard of, people were more than twice as likely to lose respect for a president who smoked marijuana in his or her free time as opposed to drinking alcohol.

When it comes to substances like alcohol and marijuana, there’s often more to consider than statistics and research. Overwhelmingly, the attitude toward marijuana was worse among respondents. On the other hand, the same people admitted they were more concerned about the dangers of alcohol and far more troubled by its addictive properties.

When it comes to substance abuse and addiction, every person is different and so is their journey to recovery. At American Addiction Centers, we offer treatments with the best choices for therapy and recovery designed to suit our patients’ needs. From detox and inpatient rehab to intensive outpatient care and family intervention, we want you to have every resource at your disposal for your health needs. No one should have to face recovery alone. Get help today at AmericanAddictionCenters.org.

To collect the data for this study, we launched a survey on Amazon’s Mechanical Turk. We had a total of 1,004 respondents. 50.8% of our participants were men, and 49.2% were women. Participants ranged in age from 18 to 80 with a mean of 36.4 and a standard deviation of 11. No one was excluded from the survey.

The data we are presenting was collected via self-report. Self-reported data can be biased and have issues. Through careful design and application of the self-report measures, we have tried to mitigate those issues.

Do your readers have an opinion on this ongoing substance debate? We welcome the reposting of our graphics and research for any noncommercial use with the inclusion of a link back to this page so that your audience has access to the full scope of our findings.