Eminem is proud of his status as a person in recovery. Last April, the Grammy Award-winning rapper celebrated 12 years of sobriety by posting a picture of his 12-step chip on Instagram, along with the caption: “Clean dozen, in the books! I’m not afraid.” The 8 Mile star also dedicated two albums to his battles with addiction—the 2009 release, Relapse, and its 2010 follow-up, Recovery. But as the former album title suggests, the 48-year-old faced struggles on his path to long-term sobriety.

Eminem’s career exploded with the release of his triple-platinum album, The Slim Shady LP, in 1999. In 2000, Eminem’s record-breaking follow-up, The Marshall Mathers LP,  added to his fame. Suddenly thrust into the chaotic world of superstardom, the young rapper began relying on prescription pills to cope. “I was the worst kind of addict, a functioning addict,” he told The New York Times in 2009. “I was so deep into my addiction at one point that I couldn’t picture myself being able to do anything without some kind of drug.”

As Eminem’s career continued to take off, so did his drug habit. In 2005, Eminem checked into his first rehab for help. He says was taking up to 20 pills a day. “Valium, Ambien, the numbers got so high I don’t even know what I was taking,” he admitted in a 2009 Vibe magazine article. 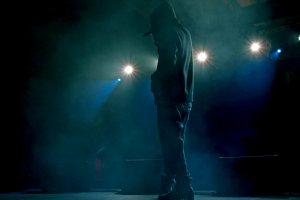 Like many people who struggle with a substance use disorder, Eminem relapsed not long after leaving rehab. His addiction worsened, landing him in the hospital in 2007 due to an overdose. Still, the “Stan” singer continued to use.“I thought it was a sign of weakness to have an addiction,” he admits. “I didn’t even want to believe it was a disease. But I realized it when I f—ing almost died and then I still went back to using. I literally almost died.”

How Eminem Found Recovery After Relapse

After a few more close calls, Eminem says he finally accepted he had a problem when he realized how his addiction was affecting his children. Wanting to make sure he was there for his daughter, Hallie Jade, and his two adopted kids, Alaina and Whitney, “The Way I Am” rhymer knew he had to do whatever he could to stay sober long-term. With the help of doctors, 12-step groups, and support from sober celebs like Elton John, Eminem was finally ready to face the music and embrace a life of recovery.

Ultimately, the megastar says that being open about his addiction and having the ability to rap about it has helped him enormously. “Not only is honesty one of the biggest parts of recovery,” he told The New York Times. “I’m blessed enough to be able to have an outlet.”

Susan Linney
Author
Susan Linney is a freelance writer and editor with more than 15 years’ experience. She is especially passionate about using her voice to help people … Read More
Read Our Editorial Policy
Recent Posts
Related Tags
addiction stories
celebrity
recovery spotlight
Don’t wait. Call us now.
Our admissions navigators are available to help 24/7 to discuss treatment.
Prefer texting to talking on the phone? We’ve got you covered 24/7.
Instead, sign up for text support to receive: