Symptoms of Dilaudid withdrawal typically begin within 4-8 hours after last use and may include:

There will be quite a bit of individual variability in the specific symptoms and timeline associated with any single case of withdrawal from Dilaudid. A number of different interacting variables can affect this process, including how much of the drug an individual typically took, how long they took it, the manner in which they took it (drugs that are injected or snorted typically produce more severe and longer withdrawal symptoms), individual differences in metabolism, and numerous other factors.

Dilaudid (hydromorphone hydrochloride) is a full opioid agonist narcotic drug that is used to treat moderate to severe pain. Dilaudid operates similarly to heroin and morphine, but it is many times more potent than those drugs.

How Does Dilaudid Work?

All opiate drugs readily attach to the receptor sites in the brain that are specialized for neurotransmitters, such as endorphins, that are naturally involved in the control of pain, exertion, and stress. Opiate drugs are primarily designed to treat postoperative pain and pain associated with injury or some other chronic condition.

Dilaudid can be given in a tablet form, taken orally in a liquid form, and administered via intravenous injection following surgery. The drug’s very powerful effects and potential for physical dependence in those who use it for lengthy periods of time have resulted in its classification by the DEA as a Schedule II controlled substance. This puts it in a classification along with other very potent drugs like morphine and cocaine.

Dilaudid is most often used for postoperative pain because it has a quick onset of action and a rather short half-life. Thus, it works quickly and does not remain in the system very long.

According to the Substance Abuse and Mental Health Services Administration (SAMHSA), of the many individuals who report misusing or abusing prescription central nervous system depressants, only a very small proportion (about 261,000) reported misusing or abusing products that contain hydromorphone, the active opiate substance in Dilaudid. Nonetheless, use of the drug has serious potential consequences. Due to its potency, the drug has been approved for use in lethal injections in federal executions. Thus, anyone abusing hydrocodone products is abusing a seriously dangerous substance. 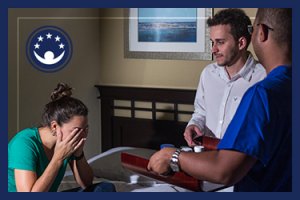 The syndrome of physical dependence consists of both the symptoms of tolerance and withdrawal. One of the most common uses of Dilaudid is for the control of postoperative pain. These cases commonly only require Dilaudid injections for a short time, and patients are very unlikely to develop physical dependence on the drug.

Individuals are typically prescribed some other pain-relieving medication upon discharge from the hospital. Therefore, individuals who are receiving the drug for medicinal reasons often do not use it frequently enough to develop the symptoms of physical dependence. Thus, in medical practice, the development of physical dependence on Dilaudid is most likely relatively infrequent due to the acute uses of the drug.

During this process, individuals who have developed opiate use disorders are often administered an opioid replacement medication by an addiction medicine physician. Medications like methadone or Suboxone (buprenorphine and naloxone) are often preferred. The addiction medicine physician will establish an initial dosage of the drug that is sufficient to result in the recovering individual not experiencing any significant withdrawal symptoms. Over time, the physician will slowly taper the dosage of the drug and allow the individual to wean off it at a pace where they will not experience any significant withdrawal symptoms.

During withdrawal, if there are complications or other symptoms that surface, the physician can address them with other medicines or interventions. This includes addressing any co-occurring mental health disorders or medical conditions that also need treatment.

Eventually, the opioid replacement medication can be totally discontinued.

Whether one chooses to withdraw from Dilaudid without assistance or to become involved in a physician-assisted withdrawal management program, simply going through the process of withdrawal is not a sufficient approach to recovery. Individuals who do not become involved in some form of long-term treatment program will relapse at rates that approach 100 percent even if they successfully complete the withdrawal process without relapsing.

Relapse potential during the withdrawal process is high during all stages, and it is particularly high as the withdrawal symptoms become more intense. Unfortunately, most individuals who have abused drugs must deal with a number of “triggers” that elicit cravings for the drug. Triggers to engage in drug use can consist of virtually any situation, including stressful situations, meeting old friends, having memories, feeling tired or hungry, etc. Many times, individuals who relapse get the feeling that the relapse just “came out of nowhere” because they have not been able to define all of the potential situations that may spark use of drugs or alcohol. Understanding one’s personal triggers and how substance use fits one’s personal needs is extremely important in avoiding issues with relapse.

Even though the withdrawal symptoms from opioid drugs like Dilaudid are not generally considered to be potentially fatal or even serious physical consequences, there are several issues that can occur during withdrawal that can result in serious ramifications. For example, an individual who is vomiting or has significant diarrhea may become dehydrated, and this can be a serious condition. Individuals who become extremely emotionally distraught during the withdrawal process are at risk for poor decision-making and may overdose during a relapse attempt, or they may be involved in accidents or be the victims of crimes.