What is Cross Addiction? (Signs & Statistics)

Written by: Editorial Staff
Updated Sep 15, 2022
4 min read
·
5 sections
What you will learn:
The difference between cross addiction and dual diagnosis.
Myths and truths of cross addiction.
Know what types of drugs may increase vulnerability in cross addiction.

Many people confuse the terms cross addiction and dual diagnosis.

They are separate concepts:

The notion of a dual diagnosis generally refers to an individual who has two very different and unrelated psychological disorders, such as depression and an alcohol use disorder.

There is a body of information that is mostly based on anecdotal evidence that recovering individuals are in danger of developing substitute addictions to other substances. Thus, there are a lot of recommendations regarding individuals with past alcohol use disorders not being prescribed narcotic medications for pain control, individuals recovering from benzodiazepine disorders not drinking alcohol, etc.  These types of case study evidence are useful in describing aspects of a broader and empirically validated theoretical concept, but they are the weakest forms of evidence to describe an overall theoretical concept. 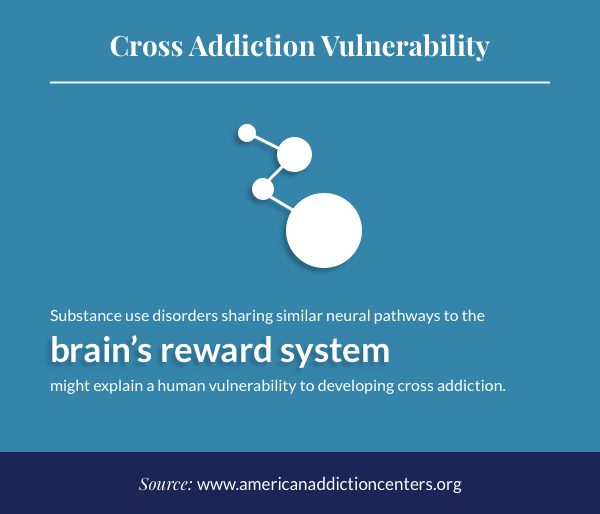 The notion of an increase in the vulnerability to develop another form of substance use disorder following recovering from a different substance use disorder seems to have some relevance in terms of common sense reasoning. It is also consistent with many strict disease models of addiction where individuals are unable to make rational choices regarding substance use due to changes that occur in the brain. The notion that most forms of substance use disorders share some similar brain pathways, such as the reward pathway in the brain that is primarily mediated by the neurotransmitter dopamine, would reinforce the notion of a neurobiological substrate that is responsible for a vulnerability to developing a cross addiction. However, the actual empirical evidence for the notion of cross addiction was mixed until very recently.

It is very difficult to make sense of the types of observations that are reported by clinicians who base their concepts on personal experience and then relate these observations to a broader notion. Even trained clinicians are known to have significant issues with cognitive biases, such as confirmation biases (only looking to confirm what you already believe), availability heuristics (just looking at the first examples that come to mind as opposed to evaluating all the information), or illusory correlations (believing that two things are related when in fact they are not). The reason that formal research methods are employed to develop theories that lay the foundation for practical treatment is to minimize the effect of bias and subjectivity when considering the broader aspects of behavior.


A Recent Study Changes the Game

Despite the relative popularity of the notion of cross addiction in many addiction treatment program descriptions, and in many 12-Step groups such as Alcoholic Anonymous, there is actually very little empirical evidence to suggest that such a phenomenon exists. This lack of research was noted by a team of researchers at Columbia University Medical Center who performed an exhaustive study on the notion of cross addiction in over 34,000 adults as part of the National Epidemiological Study on Alcohol and Related Conditions (NESARC). The findings of their study were reported in the November 2014 edition of the Journal of American Medical Association – Psychiatry. The participants in the study were surveyed in 2001 and again in 2004. There were three questions/goals of the study:

The findings have some interesting implications regarding the notion of cross addiction:

So Is Cross Addiction a Myth?

The findings would also suggest that the development of a cross addiction is the exception and not the rule, but it is something that individuals in recovery should be aware of. Thus, based on the available research, it appears that most individuals who successfully complete a substance use treatment program have developed sufficient coping skills to deal with relapse, whereas individuals who have not been able to successfully address their substance use disorders are at a higher risk to develop even greater difficulties. Research looking at what particular factors predict the notion of a substitute addiction or a cross addiction could shed more light on this issue.

The researchers at Columbia University found that the highest risk group to develop a cross addiction after successful recovery from earlier substance use disorder were unmarried males, who had a relatively early onset of their substance use disorder, and had some type of comorbid psychiatric disorder, especially disorders that were marked by impulsivity.

There are some caveats to any research study, and this particular study has a number of particular strengths and potential weaknesses. The first weakness of this study is that the study only covered a three-year period. There is no way of knowing if other individuals developed or would develop a substance use disorder at a later time. Secondly, the data was self-reported data, which can sometimes be unreliable. Researchers in future should use objective measures of substance abuse in similar studies. Nonetheless, these weaknesses do not invalidate the findings. The study is one of the few studies that looks at the actual notion of the development of a cross addiction in individuals and is able to make solid conclusions based on real data.

Research supporting the notion of cross addiction is actually relatively rare. Most of the supporting evidence is based on anecdotal evidence and case histories that are not sufficient to support an overall theoretical concept. Based on the most recent available research, it appears that the notion that an individual who has completed recovery program for a substance use disorder is at greater risk to develop another substance use disorder is the exception rather than the rule. Nonetheless, individuals in recovery should remain vigilant and follow the treatment regime of their aftercare program in order to ensure that they enjoy continued success and abstinence.

Editorial Staff
Author
The editorial staff of American Addiction Centers is made up of credentialed clinical reviewers with hands-on experience in or expert knowledge of ad … Read More
Read Our Editorial Policy
Related Topics
Don’t wait. Call us now.
Our admissions navigators are available to help 24/7 to discuss treatment.
Get addiction help now (24/7 helpline)We’re here for you every step of the way.