One of the characteristic signs of a substance abuse problem is the deterioration of workplace performance. The cognitive, emotional, and behavioral impairment that results from drug or alcohol use can affect productivity, morale, and even the safety of other coworkers. The cost of addiction in the workforce is usually measured financially, but it can also refer to more subjective losses, which can change the entire nature of an office.

Rates of alcohol use are different across industries and occupations. Jobs that have higher rates of stress, or that expose employees to greater degrees of personal harm or danger, especially blue-collar workers, are more likely to compel workers to use drugs or alcohol to alleviate their fatigue, depression, or fear. For example, truck drivers battle loneliness; correctional officers and law enforcement have to deal with hostile and menacing individuals every day. Air traffic controllers work grueling shifts, controlling the fates of literally hundreds of people and hundreds of millions of dollars’ worth in equipment in second-to-second communications and coordination. Physical laborers, such as miners, timber workers, and construction workers, are subject to any number of physical risks to their wellbeing and often have to turn up for work nursing long-term injuries. Under threat of mechanization and outsourcing, they may force themselves to work beyond natural limitations, again using drugs or alcohol to mask pain or mental distress. 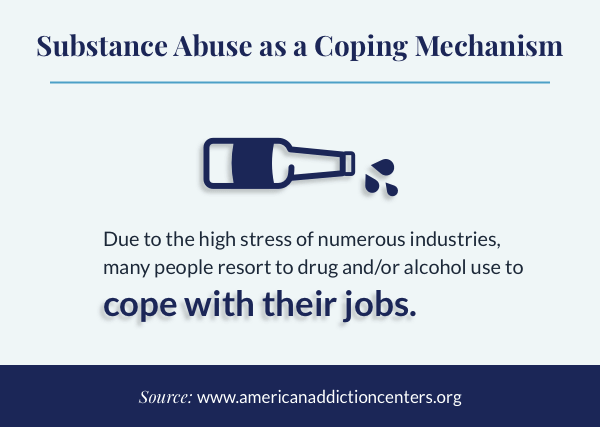 Even traditionally white-collar jobs are not immune to unhealthy amounts of stress, especially in an era of national and global economic insecurity. Social media and smartphones have extended working hours to nights, weekends, and holidays. In April 2015, a 22-year-old technology and media analyst jumped to his death in San Francisco after complaining that he had not slept in two days due to his job stress and isolation. The following month, a 29-year-old investment banker committed suicide in the same way, after pressure at work and coping mechanism of drugs and alcohol came to a head. The man’s father told the press that his son was under stress and “probably resorted to illegal drugs.”

Grueling working conditions are not limited to the loggers and miners of rural America. In the aftermath of the Great Recession, the investment bankers and analysts at some of the most powerful financial institutions in the country turned to drugs (both legal and illegal) to ease the pain of having jobs that took over their personal lives. PBS interviewed Kevin Roose, the author of a book that profiled eight such bankers who plied their trade on Wall Street after the financial crash, where these men and women (as young as 22 years old) had to work upwards of 100 hours a week without being able to see their friends and family.

The Miserable 20s with Hard Drinking and Drug Abuse

Roose pointed out that despite that grind, people in that profession (and in that industry) receive little to no support, either because of the negative perception that line of work has or because they make over $100,000 a year. But that kind of paycheck takes a toll; “their lives essentially belong to their employers,” Roose said.

One banker told Roose that “it’s not the hours that kill you, it’s the lack of control over the hours,” saying that the schedule was like being an on-call doctor.
When the office needed him to come in, whether it was during a weekend or a long holiday, he had to drop whatever he was doing and get to his desk. “It’s a miserable way to spend your 20s,” he said.

The misery is countered by Adderall, a prescription drug that is given to people with ADHD to help them focus and concentrate. That property is in high demand among college students, who take Adderall recreationally (and dangerously) in order to pull all-nighters and not be mentally drained the next morning. Similarly, bankers and analysts take Adderall to stay up longer and work harder. Roose found that employees of big financial institutions tend to drink more than they should, partly to cope with the stresses of their job and partly because of the culture of the job. Employees are expected to have drinks with their boss and their clients, often consuming massive amounts of alcohol as gamesmanship.

Obviously, such hard drinking and drug abuse can cause health problems, some of them quite serious. Roose says that high-end banking “is a really unhealthy industry,” due to the combination of unforgiving working conditions, and the custom of drug and alcohol consumption to put on a strong, macho face to impress clients and intimidate competitors.

After the Great Recession, and controversial movies like The Wolf of Wall Street, which sensationalized (and perhaps glamorized) the investment banker lifestyle as one of unfettered hedonism, Roose wrote that many Wall Street companies are trying to tone things down, going so far as to “make junior analysts take the weekend off and forcing mandatory vacation days.”

Overall, single male workers up to 29 years of age who work in a number of varying fields (e.g., hospitality, manufacturing, retail, financial services, mining, and construction) are the most likely to engage in consumption of drugs or alcohol as a result of the stress they experience because of the nature of their jobs and the resultant culture of their workspaces.

Drinking with the Job

Drinking with the boss (and, in some places, drinking heavily) is part of the job of being in a high-risk, high-reward profession like an investment analyst, but this trend is happening far beyond Wall Street. The Wall Street Journal writes of how “the keg is becoming the new watercooler,” as more officers are using alcohol to recompense (and entice) their employees for working longer and staying later at their desks. An advertising agency in Boston installed a beer-vending machine, a sign of other white-collar industries trying to blur the lines between personal and professional bubbles.

A media agency in New York provides beers to its employees (helpfully provided by the alcohol sponsors), and the founder of the company admits that the practice of regularly allowing workers to drink after their workday “may even keep them at their desks longer.” Light drinking brings workers together and takes the edge off punishing workloads and deadlines by making them feel respected and welcome, but he draws the line at intoxication.

Employment lawyers are concerned that company-sponsored alcohol in a high-stakes setting of a law office or marketing firm sends the wrong messages. Employees who don’t want to drink with their coworkers (or don’t want to drink at all) can feel excluded and marginalized; long nights, stress, and alcohol can plant the seeds for accusations of assault, sexual harassment, or even rape; and unless employees are given a place to sleep off their post-drink works, the ever-present danger of driving under the influence looms.

If something goes wrong and liability becomes an issue, the company itself may be held legally accountable. As a result, some workplaces are amending their insurance policies to cover alcohol-related incidents that take place on company property.

Find Rehab & Detox Programs Near Me