Narcotics have historically been used to refer to a number of mind-altering substances as well as to provide a broad legal designation for a range of illicit drugs; today, the Drug Enforcement Administration (DEA) more specifically defines narcotic drugs as those that relieve pain and dull the senses, and the use of the word is most commonly associated with opioid drugs.

The naturally occurring opiates (plant alkaloids derived from the opium poppy) as well as synthetic (man-made) and semisynthetic opioids are considered to be narcotic drugs, which include both legally prescribed and illicit varieties. Opioids not only diminish the perception of pain signaling in the central nervous system but also produce rewarding, euphoric effects, making them targets for abuse and highly addictive.

Below is a brief list of some of the more widely-known narcotics and opioids drugs: 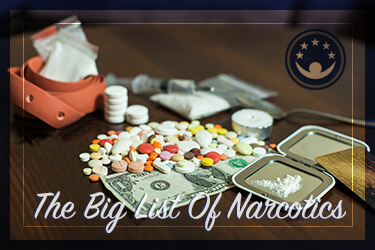 The United States is in the midst of an opioid epidemic. The American Society of Addiction Medicine (ASAM) indicates that close to 3 million people battled opioid addiction (to either heroin or prescription painkillers) in 2015. More than 60 percent of the record-high overdose deaths in 2015 involved an opioid drug, and 91 people in the US die from an opioid overdose daily, the Centers for Disease Control and Prevention (CDC) reports. Also in 2015, roughly 300 million prescriptions were dispensed for narcotic pain medications around the world, and Americans consumed 80 percent of them.

Editorial Staff
Author
The editorial staff of American Addiction Centers is made up of credentialed clinical reviewers with hands-on experience in or expert knowledge of ad … Read More
Read Our Editorial Policy
Related Topics
Related Tags
benzodiazepine
Marijuana
opioid
Are you covered for addiction treatment? Find your insurance.
Check My Insurance
Do you have insurance?
Don’t wait. Call us now.
Our admissions navigators are available to help 24/7 to discuss treatment.
Why call us?
Get addiction help now (24/7 helpline)We’re here for you every step of the way.