Premenstrual dysphoric disorder (PMDD) is a serious condition characterized by a severe change in mood in the one or two weeks leading up to a woman’s period.1 PMDD should not be confused with premenstrual syndrome (PMS), a common condition that also involves symptoms that occur in the week or two before menstruation, possibly resulting from falling levels of certain hormones after ovulation.2 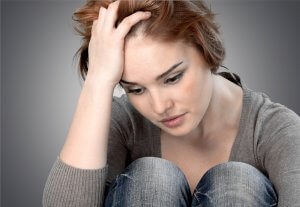 PMDD is similar to PMS but involves more severe symptoms, such as severe depression, tension, and irritability. One of the requirements to be diagnosed with PMDD is that the symptoms must interfere with the woman’s functioning or cause significant distress.3 PMDD may necessitate the use of medication.1

The condition affects up to 5% of women of childbearing age. There are different approaches to treatment, including stress management techniques, specific birth control pills, and some antidepressant medications.1 Multiple treatments may be used together.

It’s not clear what causes PMDD. The disorder might be an abnormally severe reaction to hormonal changes associated with a woman’s menstrual cycle.1,5

It’s also been suggested that serotonin levels might play a role. A woman’s serotonin levels fluctuate throughout her menstrual cycle, and some women may be more sensitive to these fluctuations.1,5

Symptoms vary between women but may include:1,3

In order for a woman to be diagnosed with premenstrual dysphoric disorder, she will need to experience 5 or more PMDD symptoms (at least one of which must be mood-related).1

The Diagnostic and Statistical Manual of Mental Disorders, 5th Edition (DSM-5) states that a subset of symptoms must be present in the week before her menstrual cycle begins, improve within a few days after her period starts, and resolve or become minimal in the week after menstruation in order for a woman to be diagnosed with PMDD. This pattern must have occurred in most menstrual cycles in the previous year.

The symptoms need to be severe enough to cause a significant disruption to her daily life (interfering with work, school, social activities, or relationships) or to cause significant distress. The symptoms cannot be caused by another mental illness or other medical condition, a drug, or a medical intervention.3

The recommended treatment plan for PMDD varies according to each woman’s individual needs. Options include:1,7,8

Browse through articles discussing PMDD and you may find sources questioning its reality. The disorder has not been accepted by all in the health care community for various reasons.

Some health care professionals believe that PMDD can be explained by depression or other mental health disorders. Some say that women shouldn’t need to be diagnosed with a mental health disorder for others to recognized their suffering or to get assistance.9 However, a 2010 study found that PMDD and major depression are linked to different biological stress responses, supporting the claim that they are biologically distinct disorders.

Controversy is common when studies reveals different pieces of information, which can be due to variation in what exactly is being investigated, the methods used in the research, and more. This is why it is important that research into PMDD, its causes, and the most effective treatment approaches for the disorder continue.

Is There a Link Between Premenstrual Difficulties and Substance Use?

A 2015 study found that past-year illicit drug use was linked to a higher risk of PMS.11

According to the Anxiety and Depression Association of America, approximately 20% of Americans who struggle with an anxiety or mood disorder also have a substance use disorder.13 A woman who suffers from PMDD along with anxiety and/or depression may turn to substances for relief. Although this might work temporarily, symptoms are often worse, longer-lasting, and more difficult to treat in individuals with both a substance use disorder and another mental illness.14

For individuals with both mental illness(es) and substance use disorder(s), integrated treatment that addresses all psychiatric disorders provides better results.15

Research into PMDD is ongoing. Women are dealing with the consequences of the disorder every day.

In addition to sharing some symptoms, major depressive disorder and premenstrual dysphoric disorder also share some treatment approaches. Medication, therapy, and lifestyle changes can be helpful for both conditions. With treatment, most women suffering from PMDD have their symptoms decrease to tolerable levels or go away completely.16

Sophie Stein, MSN
Medical Reviewer
Sophie Stein, MSN, received her master's of science in nursing from Vanderbilt University and has previously worked as an advanced practice registere … Read More
Read Our Editorial Policy
Related Topics
Related Tags
co-occurring disorders
Depression
Are you covered for addiction treatment? Find your insurance.
Check My Insurance
Do you have insurance?
Don’t wait. Call us now.
Our admissions navigators are available to help 24/7 to discuss treatment.
Get addiction help now (24/7 helpline)We’re here for you every step of the way.