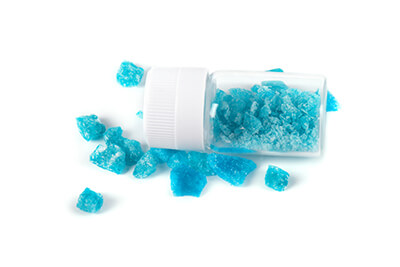 The designer drug 3, 4-methylenedioxymethcathinone, commonly known as methylone, is often found in the substances labeled as “bath salts.” The chemical composition of methylone is very similar to the structure of MDMA (3, 4-methylenedioxymethamphetamine), and methylone is sometimes sold as Molly, suggesting that dealers are trying to pass it off as a substitute for ecstasy or similar drugs. Other street names for methylone include bubbles, explosion, MDMCAT, and ease.

Methylone is also the brand name for an injectable corticosteroid that is used in the treatment of allergic reactions and arthritis. This article does not refer to that medication.

The Drug Enforcement Administration (DEA) categorizes methylone as a Schedule I controlled substance. This means that the federal government views the drug as having no medicinal purpose, and it has significant risk to be abused and lead to addiction. This final classification occurred after the drug was temporarily placed on the list of controlled substances for two years.

The Effects of Methylone

A number of research reports suggest that methylone use produces effects similar to MDMA and amphetamine. While the drug is a Schedule I controlled substance, it appears that its effects are not as well known as its use is not as extensive as similar drugs, even though the drug has been on the market for decades; it was originally developed in 1996 as a potential treatment for depression. Anecdotal evidence online from individuals claiming to have used the substance suggests that its effects can be somewhat varied and that its use is associated with a significant “crash” once the individual has stopped using the drug and its effects have begun to wear off.

Individuals use the drug to achieve effects similar to those associated with use of MDMA, such as:


However, there are a number of potential adverse effects associated with the use of methylone that include:

There are several reports of fatalities associated with use of methylone. Fatalities can occur as a result of cardiac arrest, complications associated with potential seizures, and mixing the chemical with other toxic substances.

The DEA reports that reports of the authorities seizing illegal methylone have increased.

The DEA also suggests that any reports of methylone abuse, such as hospital visits, may be underestimated as many individuals who use this drug often think they are using ecstasy or some other drug. These individuals are often in the younger age groups, between the ages of 12 and 24 years old. It appears that the majority of methylone use occurs in individuals who abuse MDMA and bath salts. Formulations of methylone are often purchased in local party stores, gas stations, head shops, etc., and on the Internet.

Currently, the research is inconsistent regarding the development of a specific withdrawal syndrome associated with abuse of methylone, but it is generally considered that tolerance does develop. As mentioned above, anecdotal evidence suggests that individuals who have used the drug experience an extreme crash similar to the symptoms associated with discontinuing other powerful stimulants like cocaine and methamphetamine. This may suggest that withdrawal symptoms, such as depression, apathy, lethargy, appetite loss, etc., occur in individuals who have used the drug for significant periods of time and then discontinue its use.

The approach to treatment for an individual who has developed a substance use disorder as a result of abusing products that contain methylone should consider the sensitive aspects of the demographics associated with the individuals who most often abuse these substances. Often, these individuals are younger, have significant family issues, and may have other co-occurring mental health issues. Treatment should focus on the needs of the individual and be customized accordingly.

The first step in the treatment process is to fully assess the individual for any other co-occurring mental health conditions and substance abuse. In addition, because chronic use of methylone can lead to significant physical damage, it would be wise to have the person undergo a full physical examination. Once the assessment process is complete, the treatment approach can be developed based on the specific needs of the individual. Treatment will most often consist of the following aspects:

Editorial Staff
Author
The editorial staff of American Addiction Centers is made up of credentialed clinical reviewers with hands-on experience in or expert knowledge of ad … Read More
Read Our Editorial Policy
Related Topics
Related Tags
bath salts
Are you covered for addiction treatment? Find your insurance.
Check My Insurance
Do you have insurance?
Don’t wait. Call us now.
Our admissions navigators are available to help 24/7 to discuss treatment.
Get addiction help now (24/7 helpline)We’re here for you every step of the way.