Imagine sitting down to a meal made for a family of four, and eating the whole thing all alone.

That’s something a man interviewed by The New York Times might understand all too well. He admits to downing 70 chicken wings within the span of about an hour. When he started eating, he just couldn’t stop.

A person like this isn’t eating huge amounts of food because it tastes good. This isn’t an issue of taste, nutrition, or hunger. Instead, this is an issue of compulsion and control. People who eat like this may have a binge eating disorder, and if they do, they might need treatment in order to get better. 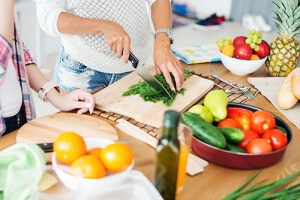 Anyone can eat too much of a tasty meal or a favorite food. But people with binge eating disorders have unique experiences when it comes to food, and the way in which they eat can seem unusual or downright strange to people who don’t have eating disorders.According to Psychology Today, people in the midst of a binge eating episode eat huge amounts of food incredibly quickly. They may not notice the taste, smell, or texture of the foods they’re eating. Instead, they focus on volume. They’re trying to push as much food into their bodies as they can within a limited or short period of time. They may eat like this even when they’re not hungry, and they may not stop eating until they’re physically incapable of consuming even one more bite of food.

Eating like this isn’t fun, and it comes with a great deal of mental anguish. People who binge may be physically disgusted with the amount of food they ate, but they may feel incapable of consuming food in any other way.

In order to qualify for a diagnosis of binge eating disorder, according to the National Eating Disorders Association, people must binge at least once per week for about three months. During those binges, people eat remarkably large amounts of food. At the end of these episodes, people don’t purge or use laxatives in order to remove the calories they ate.Not surprisingly, binge eating disorders are often associated with obesity. It’s very difficult to eat huge amounts of food all at once without gaining a great deal of weight. The body just can’t process that much food all at once, so unused calories are stored in the body as fat. People like this might try to diet, and they may discuss their weight loss plans at length, but the pounds just don’t seem to go away.

The weight gain may be visible and public, but most binging behavior happens in secret. People just don’t gulp down food in front of the people they love because they’re embarrassed or because they know the behaviors are somehow unusual or dangerous.

People who binge may try to keep their issues hidden, but visible warning signs include:

The extreme weight gain that comes with a binge eating disorder can be a source of pain. The person might consistently discuss the need to lose weight, and the person may make disparaging comments about weight. However, unless the disorder is treated, that weight issue is likely to stay in place. When it does, it can lead to a variety of very serious health problems.

These conditions can be catastrophic, and in some cases, they can lead to early death.


How Binge Eating Disorder Is Treated

A binge eating episode can seem as though it arrives out of the blue, with no warning whatsoever.

When asked why they ate as they did, many people with this disorder seem baffled or simply confused. They’re just not sure why, and that means they’re unable to stop this kind of eating before it starts.

Learning to identify triggers can be a big part of getting well, and according to the NIH, those triggers often involve negative thoughts about body shape or image. People with this disorder are often disgusted with the way they look. It’s those feelings of disgust that can lead to negative self-talk, and that leads to binging.

For example, a woman with a binge-eating disorder might look in the mirror and think, “I am so fat, and no one will ever love me because of that.” The thought rattles around in her brain all day, making her feel just terrible, and at the end of a day like this, she binges.

Arresting that binging cycle means stopping that thought, and therapy can make it happen. In therapy sessions, people with this disorder learn how to identify and name damning thoughts, and they use techniques like meditation or exercise to amend those thoughts so they won’t be compelled to binge. It’s a powerful and transformative way to address this disorder.

The Binge Eating Disorder Association says binge eating is often addressed in outpatient settings, meaning that people with this disorder often work through the issues in appointments, rather than by moving into a center where they can work with treatment teams around the clock.

But some people need a little more help than an outpatient center can offer. According to the National Eating Disorders Association, residential treatment is best for people who don’t need intensive medical care but who do have psychological impairments that keep them from success in outpatient care.

Someone like this might be so upset by depression or anxiety that appointments just can’t touch the pain. They want to get better, but they just feel too upset and too worried to stay on track with treatment. They might skip appointments, refuse to do homework, refuse medications, and relapse daily. Their outpatient work isn’t touching the pain, so they need more help.

An inpatient program allows teams to address all the factors that might play a role in binge eating. Mental illnesses that lie beneath the eating can be addressed and amended, and the safety and security of the environment ensure that no binging can take place. People can’t sneak away to get fast food or gorge on snacks because those things just aren’t available. People are required to comply with treatment, as there’s no other option available.

Someone who starts the healing process in a residential facility might transition to an outpatient program in time. This stair-step approach allows people to get the right level of care at the right time, without any abrupt moves that could lead to a binging relapse. Once the treatment is complete, followup care might be required.

Stressful situations, crises, or life changes could all awaken binge eating patterns in someone in recovery. When that happens and people begin to feel a need to return to an unusual way of eating, a course of brushup care could be an ideal way to address the concern and help the person to stay on course with health and healing.

Binge eating disorders can seem like simple issues of control.

People with these issues might feel as though they should simply work harder to handle their eating, and if they could just gather the strength, they could get cured without the help of an outsider.

It’s important to remember that binge eating disorder is a mental illness. Just as someone wouldn’t expect a person with schizophrenia to pull together a self-cure, it’s not reasonable to assume that someone with a binge eating disorder could conquer the problem with simple strength and hard work. This is a serious issue that requires a serious response. Without that help, this isn’t a problem that’s likely to resolve.

Unfortunately, many people with binge eating disorders don’t get that message. The National Institute of Mental Health reports that less than half of people with this disorder get help during their lives. That means thousands of people could be trying, and failing, to handle this problem alone.

People with binge eating disorders need support, and that can come from their families. The more that families learn about what these disorders are and what they can do, the more they can talk appropriately about treatment options and solutions. They can guide, advise, and support. When that happens, everyone can feel better about the course of care, and that could mean all the difference in terms of healing.

An open talk about the issue might start with words like, “I’ve noticed that you’re eating quite a few meals in your car, and when I look at receipts, I see that some of these meals are really big. Is everything okay? I care about you, and I’d like to help.” This is a factual, nonjudgmental approach that’s based on real things the family has seen.

It might not be an easy talk to hold, but it could be the most important conversation a family ever has. It could save a life.