“Sobriety” holds various meanings to different people. Likewise, the thought of consuming alcohol can hold different meanings to different individuals as well. For some, it’s an enjoyable social activity done amongst friends at dinner, in front of a football game, or with colleagues at a nearby Happy Hour. For others, a case of beer or a bottle of wine are associated with alcoholism, which carries a different weight altogether.

Chef Chris speaks candidly about his struggles with alcohol misuse in both the kitchen and in his personal life. From the struggles to the triumphs, he opens up about the impact alcohol has had on his life and how he is now living a life of sobriety.

Be sure to watch this Addiction Talk episode entitled: Addiction in the Kitchen: A Top Chef’s Recipe for Sobriety Success.

If you’re struggling with an alcohol use disorder, you’re not alone. There are resources to help you reach long-term sobriety. As a nationwide leader in addiction treatment, AAC provides medical detox and treatment with compassionate and licensed medical professionals in a safe environment. Please reach out to get the help that you need.

Alcohol use disorder, also known as alcoholism, is the diminished ability to control or stop alcohol use, regardless of the negative 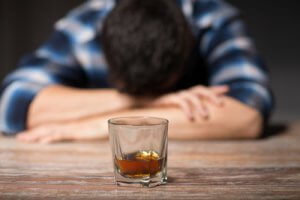 impact on one’s health, social interactions, or occupation. It’s a medical condition that’s considered a brain disorder and is categorized by degrees of severity based upon mild, moderate, or severe.

Chef Chris has seen both alcohol and substance misuse when working in the restaurant business. He recalls the time in the 1990s when easy access to both were readily available.

“We would go into work, and somebody was always holding. The bartender behind the bar was always in on it. If I had cocaine, somebody else had weed, and we would drink for free. You know, steal from the company. We used to call that the ‘Trinity.’ A constant flow of coke, weed, and booze,” admitted Chef Chris.

But he feels like the restaurant culture may have shifted. Perhaps it was his own shift that made all of the difference. “My circles are not like that now. I assume that in some parts of the world, that culture does still exist.”

Chef Chris is too busy raising awareness and using his platform to help others struggling with alcohol and substance misuse. Being a finalist on Season 15 of Top Chef contributed to him doing just that.

When he was on the show, there was an episode when he was put in a position requiring him to make a definitive decision. This is when he realized he needed to start spreading the word about substance misuse in the restaurant industry.

“We had to do the beer tasting,” Chef Chris shared about the episode that entailed the defining moment. “And I just knew that wasn’t going to happen for me. I wasn’t going to drink beer. But I was also very young in my sobriety at that point. So, just being in that scenario was a little uncomfortable. As a result, I didn’t do well during that challenge. I think it was then that I began to talk more about what was going on with me emotionally during that challenge.”

Chef Chris was given a “free pass” for not following through on that particular challenge under the circumstances and he was able to maintain his sobriety.

To learn more about Chef Chris Scott, alcohol use disorder, and recovery, please watch this encouraging episode of Addiction Talk. And if you find yourself battling with alcohol misuse, please reach out for the help that you need today.

Nitara Osbourne
Author
Nitara Osbourne, M.Ed., is an award-winning writer and Content Specialist at American Addiction Centers.
Read Our Editorial Policy
Recent Posts
Related Tags
alcohol misuse
alcohol use disorder
recovery
Don’t wait. Call us now.
Our admissions navigators are available to help 24/7 to discuss treatment.
Prefer texting to talking on the phone? We’ve got you covered 24/7.
Instead, sign up for text support to receive: