How to Raise Awareness about Veterans and Substance Misuse

Veterans Day is a day to honor those who have served in the United States military and is celebrated annually on November 11th. These dedicated men and women have put their lives on the line for their country, and inevitably, for all of us. And unfortunately, after being discharged, many, especially those who have served in combat, are left to face challenges such as post-traumatic stress disorder (PTSD), suicidal ideation/suicide, and even alcohol and/or substance misuse.

PTSD is an anxiety disorder that is not only linked to combat but may occur as a result from traumatic events such as serious accidents, natural disasters, and terrorist attacks.

In fiscal year 2018, there were over 1.7 million veterans who received treatment in a Veteran’s Affairs (VA) mental health specialty program.

It’s estimated that 18% of those who died by suicide in 2014 were veterans.

It’s also estimated that roughly 1 in 10 veterans returning home from the Iraq and Afghanistan wars have a problem with drugs or alcohol.

For this Veterans Day, let’s continue to raise awareness about the needs of veterans in the hopes that more people will contribute to solutions to help those who have graciously served all of us.

American Addiction Centers (AAC), a nationwide leader in addiction treatment, provides medical detox and treatment in a supportive and safe environment. We even offer specialized programs dedicated specifically for the unique needs of veterans, active-duty service men and women, first responders, police officers, and fire fighters. If you’re struggling, please reach out for the help that you need today. 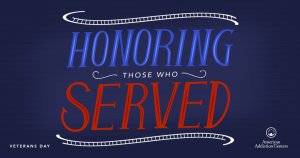 celebrating the end of World War I, honoring WWI veterans, and a dedication to the “cause of world peace.” WWI ended on November 11, 1918. After WWII and the Korean War ended, Congress amended the Act of 1938 in the year 1954. This amendment revised “Armistice” to “Veterans,” and November 11th became a day to honor U.S. veterans of all wars.

Today, Veterans Day is an official federal and state holiday. Although there are some closings, not all businesses are closed on this day. American citizens can choose to celebrate and honor our veterans in a way that they choose. One way is to learn more about veterans, which raises awareness about who they are and what obstacles they’re facing as a community.

One of the many challenges they’re up against is substance misuse. Just like with anyone who misuses substances, service members and veterans aren’t immune to the negative impact that substance misuse causes. Substance use disorders often co-occur with other conditions and may exacerbate these conditions. These issues may be mental health conditions, unemployment, or even homelessness, to name a few.

If you’re a veteran and battling with an addiction to substances, you’re not alone. AAC is here to help you to achieve long-term sobriety and to live a healthy and productive life one step at a time. If you’re struggling, please reach out for the help that you need today.

Nitara Osbourne
Author
Nitara Osbourne, M.Ed., is an award-winning writer and Content Specialist at American Addiction Centers.
Read Our Editorial Policy
Recent Posts
Related Tags
addiction treatment
substance use disorder
veterans
Don’t wait. Call us now.
Our admissions navigators are available to help 24/7 to discuss treatment.
Prefer texting to talking on the phone? We’ve got you covered 24/7.
Instead, sign up for text support to receive: