When Does Microdosing Turn Into Macrodosing?

LSD is a not-so-complex chemical compound with a complex history. While LSD is illegal in the United States, psychedelics are beginning to be more closely studied, primarily for their potential psychiatric benefits. Microdosing is the act of taking small amounts as a weekly routine, while macrodosing (or just dosing) would be taking enough to “trip”. Many who microdose regularly report more energy, better focus, enhanced creativity, and improved cognitive skills. For macrodosing, people often relate the experience to something spiritual or a heightened sense of awareness. The question is does LSD really do either? 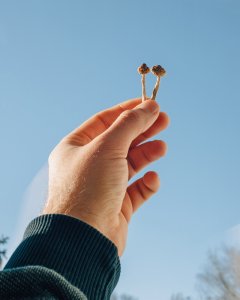 What is Microdosing psychedelics?

In May 2019, the journal of Biological Psychiatry performed a month-long, four-session double-blind study on microdosing. The study gave participants LSD amounts of 6.5, 13, and 26 μg. During the study, participants were asked to fill-out a simple mood questionnaire. In short, the participants reported higher levels of “vigor.” The journal concluded that “13μg of LSD might be used safely” at microdosing levels.

While there hasn’t been many studies on LSD microdosing to date, a recent survey of over 1,000 people from 59 countries who microdosed LSD for at least one week and up to four months reported elevated moods and decreased depression, as well as other cognitive and behavioral benefits. Thanks to a rising number of scientific studies and anecdotal reporting, many major media outlets, such as a NY Times and The Guardian, have run stories on LSD microdosing, and the phenomenon has spiked worldwide interest.

The Risks of Microdosing Addiction

While various people offer different routines to microdose, the common consensus is to not take it on consecutive days or too often (to avoid tolerance). Also, many suggest taking it in the morning as to avoid interfering with sleep. In addition, many suggest that the “benefits” will last throughout the day. In other words, the purpose is to find something that uplifts your routine, day-to-day existence.

With that said, the chemical compound of LSD and psilocybin (in magic mushrooms) is very similar to the chemical compound of serotonin, which is the neurotransmitter most associated with mood stabilization. For example, most antidepressants affect the receptors of Selective Serotonin Reuptake Inhibitors, or SSRIs, increasing the amount of serotonin.

So, if this is the case, then LSD and psilocybin aren’t really the products to offer any real benefit. Instead, the substances are mimicking what serotonin actually does. This idea could be associated with coffee or any other substance for that matter.

When Microdosing Turns Into Macrodosing

In short, the neurotransmission that occurs may increase growth, connection, and activity, as well as brain functioning. The use of psychedelics may also present pathways that your brain does not do naturally. These new connections may also dampen the brain’s Default Mode Network (DMN), which is responsible for daydreaming, self-reflection, and thinking about the past or future. A highly active DMN causes us to ruminate or overthink, which can cause use to not think in the present and to think overcritically. Many experts believe that depression may be caused by an overactive DMN. As such, microdosing may alleviate this depression.

With all of that said, there may be benefits to microdosing. However, it’s more true that serotonin is actually the producer of these benefits. So, the question remains, when does microdosing actual turn into (macro) dosing? Biologically, it doesn’t matter. Psychedelics are only man-made chemicals that mimic what your brain can already do naturally. So, while the microdosing phase continues to dominate headlines, remember: it’s all in your head.

Matt Berry
Author
Matt Berry is a published author, award-winning journalist and editor. For more than a decade, Matt has specialized in covering U.S. substance abuse … Read More
Read Our Editorial Policy
Recent Posts
Related Tags
addiction
drugs
psychedelics
Don’t wait. Call us now.
Our admissions navigators are available to help 24/7 to discuss treatment.
Prefer texting to talking on the phone? We’ve got you covered 24/7.
Instead, sign up for text support to receive: