Steven Tyler is one of the most well-known rockers alive. Since first rising to fame in the 1970s as frontman for the band Aerosmith, he’s responsible for a long list of iconic songs, from “Dream On” and “Sweet Emotion” to “Walk This Way,” “Janie’s Got a Gun,” and “Love in an Elevator.” But for all his success, Tyler has also faced a number of tough challenges, including a serious drug and alcohol addiction and multiple relapses. Here’s the story of this music legend’s struggle and journey to long-term recovery.

Steven Tyler Was Living on the Edge

When Tyler first hit it big with Aerosmith in the ‘70s, substance use was rampant on the rock-and-roll scene. “It was more or less the thing to do,” the “Livin’ on the Edge” singer explained in a 2019 interview with GQ. “I don’t think there were any bands that even knew what sober was.”

Tyler says he drank alcohol to excess and used a wide variety of drugs, including cocaine, heroin, methamphetamine, and LSD. But because most of the people around him were doing the same, he didn’t feel like he had a problem. He also believed, like many musicians do, that his substance use helped enhance his creativity. 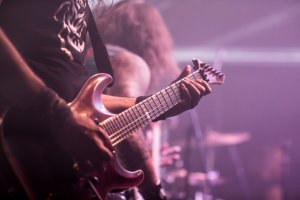 When his bandmates staged an intervention for him in the mid-1980s, Tyler checked into rehab and managed to stay sober for more than a decade afterward. During this time, Aerosmith scored some of biggest its hits — effectively squashing Tyler’s mistaken belief that he needed alcohol or drugs to be creative.

Unfortunately, the rocker suffered a relapse after being prescribed pain killers for foot surgery in the early 2000s. He struggled for years to achieve long-term sobriety once again, eventually seeking treatment for his pain pill addiction in December of 2009.

Coming Back From Relapse

While relapse doesn’t have to be a part of recovery, it’s nothing to be ashamed of. Steven Tyler’s own story serves as an excellent example of this. In fact, the 73-year-old performer says it’s the lessons he learned during his first recovery experience that gave him the courage to reach out for help again — and he’s now been sober for 11 years.

Tyler says he relies heavily on AA meetings to help him maintain his sobriety and is grateful he can find these meetings pretty much anywhere in the world. “I continue to partake in the 12-step program,” he told GQ. “I can be in Afghanistan, I can be in Japan, and go to a meeting and the room is full of alcoholics and people that did drugs like I did. Only nobody’s high. And, believe me, the stuff they say is phenomenal. They’re still crazy, they’re just not under the influence.”

If you’re struggling with substance use, we’re here for you. Reach out for help today.

Susan Linney
Author
Susan Linney is a freelance writer and editor with more than 15 years’ experience. She is especially passionate about using her voice to help people … Read More
Read Our Editorial Policy
Recent Posts
Related Tags
addiction
recovery
recovery spotlight
Don’t wait. Call us now.
Our admissions navigators are available to help 24/7 to discuss treatment.
Prefer texting to talking on the phone? We’ve got you covered 24/7.
Instead, sign up for text support to receive: