Veterans with Mental Health Challenges are Combating the Stigma

It takes courage to serve one’s country. And it takes courage to be willing to sacrifice one’s life in the name of service. The impact of the experiences on the battlefield in foreign lands is a weight that’s all too heavy for most. It’s not the temporary burdens of carrying physical objects that are the challenge, but rather the trauma carried by the mind long after service members return home. Couple this with combating the stigma associated with mental health conditions, oftentimes veterans are faced with ongoing battles off of the field for years to come. However, veterans can overcome the mental health stigma they face and live a healthy life in recovery.

Joy Sutton, hostess of American Addiction Center’s (AAC) new talk show, Addiction Talk, touched on mental health, combating the stigma, and how these challenges relate to those who serve in our U.S. Armed Forces.

In this up-close and personal interview, she spoke with the following guests:

This courageous lady and two gentlemen shared their personal experiences in the military in how it relates to mental health and combatting the stigma associated with it.

Be sure to listen to the recording of this bold and inspiring episode that includes the above panel of brave veterans. And continue to look for announcements to new episodes of Addiction Talk! You don’t want to miss an episode!

Many veterans experienced the death of friends and colleagues both on the battlefield and at home by way of suicide. Experiencing trauma for any individual can be overwhelming. However, service members may sometimes be in the crossfires of traumatizing events more so than the general population.

Army Combat Veteran, Steven Kuhn said, “The reason I’m very passionate about this [mental health and veterans] is because I lost more veteran friends to suicide than I have on the battlefield. And I personally had a very close call with suicide back in 2008 when I ended up homeless as a 40 year-old man. So recovering from that, I said that’s not going to happen to me or to anyone that I can help ensure doesn’t happen to them.”

It’s incredible how personal experience ignites a fire underneath individuals like Steven in order to go out and help others. The Army Combat Veteran enlisted in the U.S. Army in 1986, was sent to Germany, followed by going to Operation Desert Storm in 1990. 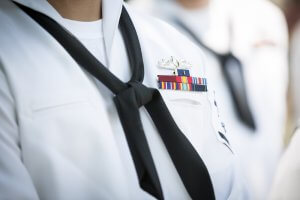 Our very own Chief of Staff and a Navy SEAL Veteran, Dan Cerrillo, served in the military just under 15 years and was deployed to both Iraq and Afghanistan.

Now sober and serving as a leader at AAC, when asked about mental health and veterans he said, “Along the way, I found myself going down a dark hole. I was close to losing my job… to losing my marriage. I kind of alienated myself into a dark hole. So I sought out help. And then I found out the joy and peace of what sobriety actually brings. It was the first time I had ever been sober since I was 12 years-old. I started wanting to help my friends. And just like Steven, I’ve lost way more friends post-war than I did during war. Learning what we suffered from and why, drove me to start helping people.”

Empathy as a Means to Defeating Stigma

Annette Whittenberger is an Army Combat Veteran who retired from the military nearly five years ago. Since leaving the military she’s started her own blog “to act as a safe place” for her to talk about mental health.

Annette said, “I was a master at hiding all of my feelings. I masked them with several different types of addiction. Whether it was monetary. Drinking. Or hanging with the wrong people. I was just a different person. So when I retired, it was like a volcano erupted. Everything started to come out on why—on what all these feelings that I had that I was never able to talk about.”

Her blog is giving her a platform to share and to listen. Annette went on to say, “I started to realize that I wasn’t alone. The more I talked about it, the more I saw there were other people struggling. And not just veterans… I’ve lost people to suicide. My own children battle with depression. So I need to do something about it.”

We want to thank Steven, Dan, and Annette for their service to the United States and for sharing their amazing stories and experiences with AAC on Addiction Talk!

To learn more about these heroic leaders and service members, watch this recording of Addiction Talk. And if you find yourself battling with substance or alcohol abuse and struggling with any co-occurring mental health conditions, please reach out for the help that you need today.