How Is Cocaine Used? Methods of Use and the Dangers of Each

Cocaine is an illegal stimulant drug with a high potential for misuse. People typically use cocaine by smoking, snorting, or injecting it to experience the drug’s stimulant effects, such as increased mental alertness and euphoria. Unfortunately, cocaine can potentially bring about short-term and long-term health risks to a user that are not only caused by the drug’s typical mechanisms, but also the user’s method of administration.1,2

Read on to learn more about the dangers of smoking, snorting, and injecting cocaine and how you can help you or your loved one get treatment.

Someone who smokes cocaine may experience an almost-instantaneous high that is more intense than the high they’d experience through snorting a powder form of cocaine. This rapid and concentrated effect can make smoking cocaine a more alluring method of consumption and account for some of the reasons why people may choose this method of cocaine use.6

When someone buys cocaine on the street, it comes in a white powdery substance that isn’t easily smoked without first changing its formula and consistency. This can be done in one of two ways — freebasing cocaine or smoking crack cocaine.8

Freebasing cocaine involves a lengthy, and potentially dangerous, extraction process that eventually results in a purified and very potent form of cocaine.8 Crack cocaine does not involve a purification process and is usually less pure, carrying along with it any additives and dilutants alongside as a result, with only about 40% (on average) of it being pure.8

After inhaling the smoke from crack cocaine, it only takes about 10-15 seconds before someone experiences an intense rush of euphoria. Someone may experience certain respiratory side effects within minutes or hours after smoking cocaine, including:9

There are potentially some long-term complications associated with smoking cocaine, too. Various respiratory issues are associated with chronic cocaine smoking, such as a chronic cough with chest pain and blackened sputum (blackened phlegm). Some people may even experience lung scarring and reduced lung capacity, making it difficult for some people to breathe normally.

If someone snorts cocaine, they risk irreversible damage to their nose, mouth and throat. Snorting cocaine can cause severe tissue and bone degeneration, which may result in a perforation of the nasal septum, which is the divider between the two nostrils, or perforations in the roof of the mouth. Other potential risks include.3

Injecting cocaine involves dissolving the powdery substance with water, then injecting it into a vein. Intravenous injection allows for the drug to be absorbed into the system quickly, providing an almost immediate high. 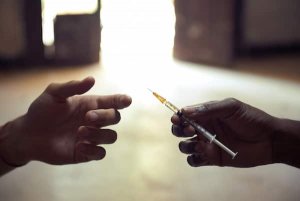 When someone injects themselves with cocaine, they put themselves at increased risk for blood-borne diseases, such as hepatitis C and HIV/AIDS. Many people who use drugs share needles, a primary method of spreading HIV/AIDS and hepatitis C.9

Contracting IV-related diseases and infections are not the only dangers of injecting cocaine. There is a risk for vein collapse, scarring, and soft tissue infections, too.10

Regardless of the method of use, individuals who use cocaine risk developing an addiction to it. Signs that indicate a person may be suffering from or developing a cocaine addiction include: 10

If you recognize these signs in yourself or someone you love, reach out for help immediately. With the proper treatment, you can begin the journey to healing and vacate from a life ruled by cocaine use. Although the first step may be difficult, with effective, evidence-based treatment you can overcome a cocaine addiction and live a healthier life.

Short- and Long-Term Effects of Cocaine Use

Cocaine, no matter how someone ingests it, may induce changes in a person’s brain that encourage repetitive use and can lead to addiction.11 In fact, evidence suggests that up to 1 in 6 persons, who use cocaine, will develop a moderate or severe stimulant use disorder. Heavier use through smoking and injection is more heavily associated with developing a stimulant use disorder than lighter use or use through the intranasal and oral pathways.12

Other short- and long-term health risks associated with chronic cocaine use that extend well after a person stops using cocaine include:4,12,13

Though cocaine use, alone, is dangerous, analyzing the risks associated with an individual’s cocaine use is incomplete without the full examination of their method of use. Heavier users and those who inject or smoke cocaine are more likely to become addicted than lighter users or those who snort or ingest cocaine orally.12 Although any cocaine use carries with it a risk of addiction as well as neurological and cardiovascular complications, each manner of ingestion has its own associated and unique health risks.

If you or a loved one struggle with cocaine use, help is available. Treatment is tailored to your unique needs, which may include simultaneous treatment for co-occurring mental health disorders and other underlying health issues.

While there are currently no medications approved by the U.S. Food and Drug Administration (FDA) for the treatment of cocaine addiction, other therapeutic interventions used include education, individual and group counseling, and behavioral therapies—such as cognitive-behavioral therapy and contingency management—delivered in outpatient settings, inpatient programs, or long-term residential facilities.13

Aftercare, or ongoing treatment, continues after the formal treatment ends and helps you sustain lasting recovery and avoid relapse by encouraging continued counseling, sober living environments, and participation in mutual-help groups such as Cocaine Anonymous.13

If you think you or a loved one suffer from a cocaine misuse problem or addiction, call American Addiction Centers (AAC) at

We will answer your questions and connect you with a compassionate admissions navigator, who can help you get started on the road to recovery.

Sherilyn Moore, B.A.
Author
Sherilyn Moore is a freelance writer with over 10 years of experience. She has dual bachelor’s degrees in English and Communications and an Inbound M … Read More
Read Our Editorial Policy
Related Topics
Related Tags
cocaine
About The Contributor

Sherilyn Moore, B.A.
Author
Sherilyn Moore is a freelance writer with over 10 years of experience. She has dual bachelor’s degrees in English and Communications and an Inbound M … Read More
Read Our Editorial Policy
Related Topics
Related Tags
cocaine
Are you covered for addiction treatment? Find your insurance.
Check My Insurance
Do you have insurance?
Don’t wait. Call us now.
Our admissions navigators are available to help 24/7 to discuss treatment.
Get addiction help now (24/7 helpline)We’re here for you every step of the way.