Authored by Editorial Staff
Last Updated: January 29, 2021
Editorial Staff
The editorial staff of American Addiction Centers is made up of credentialed clinical reviewers with hands-on experience in or expert knowledge of addiction treatment.
Related Topics

That statistic comes from a comprehensive review of medical records, performed as part of a study published in the Journal of the American Medical Association. It seems to suggest that many people in this country struggle with issues of weight and nutrition and exercise. But it could hint at something bigger.

Some people in this country are obese because they have an unusual relationship with food. Instead of using food to hydrate and energize their bodies so they can handle day-to-day tasks, they think of food in addictive terms. They don’t just need to eat to stay alive. They’re obsessed with food, and they think about food even when they’re not hungry. When they do eat, they gorge on food until they can’t eat any more.

People like this could be struggling with compulsive overeating. While this issue can lead to some terrible medical problems and severe psychic distress, it’s also an issue that’s remarkably responsive to treatment. That could be really good news for people who want to change the way they think about and consume food. 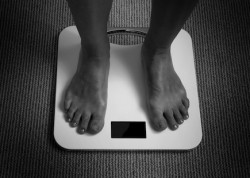 Every person on the planet needs to eat food in order to survive.

It’s likely that almost every person has eaten just a little too much of a specific food at one point or another. People with compulsive overeating issues are just a little different.

Looking closely at a few diagnostic questions provided by Overeaters Anonymous could help to clarify what people with compulsive overeating deal with on a regular basis. The organization suggests that people might need help if they:

Most of these questions center on thoughts or states of mind that might impact a person with a compulsive eating problem. These aren’t the sorts of things families might see or experience for themselves, but there are some behaviors that come with compulsive eating that could be quite visible to outsiders. For example, people with compulsive eating behaviors tend to eat a great deal of food in one sitting, and they often binge in private. Families might notice that cupboards seem bare, even when the family has just been shopping. They might notice that the person’s car, office, or bedroom is packed with hidden foods and/or food wrappers.

Researchers writing for the Journal of Trauma and Dissociation suggest that people with these disorders often enter a trance-like state when they eat. They’re unaware of the smell or the taste of the foods they’re eating, and they may not hear people coming or going from a room when they eat. That means families could stumble on overeating episodes, and when they do, that could be a big sign that something terrible is happening.

Eating a great deal of food in one sitting is hard on the stomach and the digestive system. During a binge, vital organs can become distended and overtaxed, and that can lead to gastrointestinal pain, bleeding, and/or blockages.
Once the body does digest food, the excess calories are often laid down as fat.

Diets aren’t the answer, when it comes to compulsive overeating issues.
People with these disorders need a comprehensive approach that allows them to think about food in a whole new way.

Often, that involves therapies that borrow techniques from the drug addiction movement. That approach makes sense, according to researchers writing for the journal Appetite, as people with compulsive overeating issues often appear in treatment programs with issues seen in people who have drug addictions. They need the same treatment as a result.

Therapy approaches often focus on the thoughts that come just before a binge. People might be asked to examine all the negative thoughts they have about their bodies, their emotions, and their lives.

The National Centre for Eating Disorders suggests that people looking for therapy help should ask about both the training and the approach of people who will be involved in the treatment plan. Have they treated eating disorders before? What therapies do they offer? What success rates do they see? How long does treatment last? Asking questions isn’t pushy or demanding. It’s a good way to understand how a therapist works, so people can get the right kind of help for the problems they’re facing.

Some people find that it’s helpful to join an overeating support group. These meetings aren’t run by professional therapists, so they shouldn’t be used as a substitute for psychiatric help. Support groups can help to reduce the sense of isolation that comes with compulsive overeating, and the members of these groups can sometimes provide real-world advice on how to keep food cravings under control.

Overeaters Anonymous officials suggest that about 60,000 people participate in these support group meetings worldwide. In a typical meeting, people come together for a sort of blessing or welcoming moment, and then members have an opportunity to learn more about compulsive eating. Sometimes, speakers share their knowledge. Other times, the group discusses printed literature. Near the end of the meeting, the group does a closing blessing or ceremony, and the group adjourns.

There is no fee to attend meetings, and there’s no official roster of membership. People can go to as many meetings as they’d like, and they can stop going anytime they choose to do so. Members can also lean on one another outside of meetings for additional support. These sponsorship opportunities can be a source of amazing friendships and ongoing eating support.

Are There Food Addiction Hotlines?

The National Eating Disorders (NEDA) provides a support helpline available Monday – Thursday 11am – 9am ET and Friday 11am-5pm ET. The number is (1-800-931-2237). If you or someone you love is suffering from food addiction and substance abuse at the same time, our addiction hotlines are available to help you find treatment options.

Last Updated on January 29, 2021
Share
Editorial Staff
The editorial staff of American Addiction Centers is made up of credentialed clinical reviewers with hands-on experience in or expert knowledge of addiction treatment.
Related Topics
Don’t wait. Call us now.
Our admissions navigators are available to help 24/7 to discuss treatment.
Why call us?
Get addiction help now (24/7 helpline)We’re here for you every step of the way.