According to the National Survey on Drug Use and Health, 1.8 percent of people age 12 and older have used heroin at least once. This opioid drug, synthesized from morphine, produces a strong euphoric high followed by sedative effects – a feeling of deep relaxation and sleepiness.

Heroin use is commonly portrayed in media in the injected form using a syringe, but it can also be smoked or snorted. Each method of taking a dangerous illicit drug like heroin comes with its own unique health risks. In the past couple decades, snorting heroin has become more popular as it’s often seen as less risky. However, no matter the use method, heroin is still highly addictive, has a high overdose potential, and can cause significant damage to the body and brain when abused for an extended period of time. 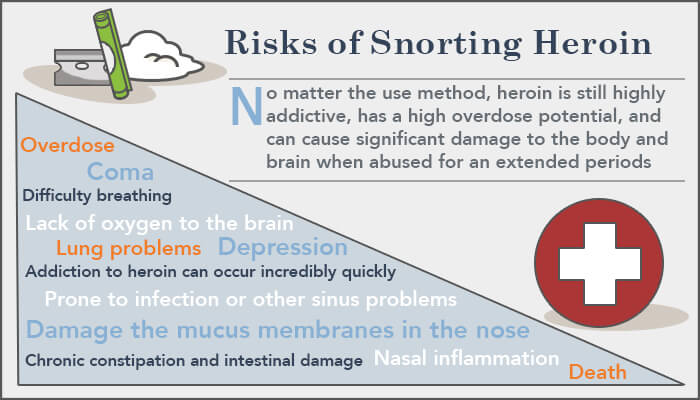 Both injecting and smoking heroin require the use of tools. Injecting heroin involves carrying a syringe and needle and tools to liquefy the substance, which is often delivered in powdered form. The needle delivery system comes with a substantial risk of damaging blood vessels as well as contracting HIV and/or hepatitis. To snort heroin, however, all you need is a pure powder form of the drug, a flat surface, and a straw or rolled-up paper. Even when the drug is not pure enough to snort directly, it can be liquefied and snorted into the nose with the barrel of the syringe.

Snorting heroin is thought to be safer, as the absorption process through the nose and lungs is not nearly as fast as smoking the drug or injecting it directly into the bloodstream. With the snorting method, it takes about five minutes for the high to begin. This delay means that not as much of the drug will accumulate and affect the brain at once, making it less addictive. Unfortunately, many individuals who abuse heroin will eventually turn to smoking or injection due to the desire for a faster and more intense high.

Injecting heroin also comes with a lot of social stigma, in part due to media depictions of this method. The general public has become more aware of the signs of heroin injection and may be able to spot them more easily. It’s much easier to hide heroin use when snorting the drug.

The most immediate risk using is heroin overdose. According to the Centers for Disease Control and Prevention (CDC), over 8,200 people died in 2013 due to heroin overdose – a number that is four times higher than it was in 2002.

Though it may seem like snorting heroin reduces the risk of overdose due to the fact that it takes longer for the high to begin, this assumption can make it all the more dangerous. Those who snort heroin are often more “casual” users who may spend a couple days using the drug and then stop for a while. The problem with this is that even with snorting, tolerance to heroin still builds up very quickly. Once an individual stops using, that tolerance fades. Unaware of this, the person may then go back to using the same amount of heroin they ended on during the last session.

In addition, addiction to heroin can occur incredibly quickly. Even those who start using heroin occasionally often quickly escalate to regular use. Heroin works by depressing the areas of the nervous system that control breathing and heart rate. When overdose occurs, the affected individual’s breathing may slow to the point that the brain isn’t getting the oxygen it needs. This condition is called hypoxia, and it is extremely dangerous. The person can then slip into a coma and, if someone doesn’t intervene in time, can experience serious side effects related to hypoxia or die.

Signs of a heroin overdose include:

Another problem with snorting heroin is that it will damage the mucus membranes in the nose over time. With enough use, irritation and inflammation of these sensitive membranes can occur, making the individual prone to infection or other sinus problems. Eventually, the tissue becomes damaged, and a hole can form in the nasal septum. Nose and lung problems are especially dangerous for those with asthma.

Snorting heroin does not shield anyone from the general health problems that can develop from use of this drug, including respiratory issues and vulnerability to infection, chronic constipation and intestinal damage, depression, and any additional issues that can arise due to the fact that heroin is so often mixed with other substances to increase profit margins. Plus, according to a 2015 report, over 90 percent of people who used heroin also used at least one other drug at the same time.

Though it may not be as clear as someone who is injecting heroin, there are still plenty of ways to spot someone who is snorting the drug. The high will be the same, as well as the signs of psychological and physical dependence. Plus, runny nose and sniffling are symptoms of any type of heroin use due to the fact that the drug releases histamine in the body, which is part of an immune response that causes inflammation, especially as part of an allergic reaction.

A hole in the septum that’s not caused by a deliberate piercing is also a classic sign of long-term heroin use via snorting. Otherwise, you might look out for a preoccupation with carrying a straw or paper that can easily be rolled up into a tube.

Either way, there are plenty of ways to spot drug abuse and addiction. Look for changes in social circles, grooming habits, and one’s ability to meet deadlines at school or work. Any abuse of an intoxicating substance, especially a powerful and dangerous one like heroin, will eventually begin to seriously interfere with the person’s life. As much as that person might try, there’s eventually no hiding it.

Last Updated on February 22, 2022
Share
Meredith Watkins, M.A., M.F.T.
Meredith Watkins is a licensed marriage and family therapist who specializes in dual diagnosis and eating disorders.
Related Topics
Related Tags
heroin
Don’t wait. Call us now.
Our admissions navigators are available to help 24/7 to discuss treatment.
Why call us?
Get addiction help now (24/7 helpline)We’re here for you every step of the way.