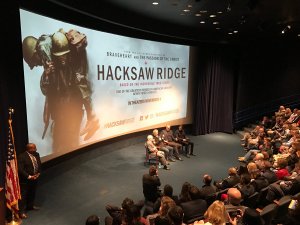 Members of the AAC first responder team attended the exclusive VIP screening of the film which included a Q & A with Mel Gibson.

American Addiction Centers’ First Responder Lifeline Program was selected to serve as a military resource for the new Mel Gibson film Hacksaw Ridge. The film, released to the public on November 4, 2016, shares the extraordinary true story of WWII medic Desmond Doss, played by Andrew Garfield (The Amazing Spiderman), who, in Okinawa during the bloodiest battle of WWII, miraculously saved 75 men in a matter of hours without firing or carrying a gun. He was the only American soldier in WWII to fight on the front lines without a weapon, except the simple prayer he uttered before he single-handedly evacuated the wounded from behind enemy lines, under constant enemy gunfire and artillery bombardment.