Written by: Editorial Staff
Updated Oct 24, 2022
4 min read
·
4 sections
What you will learn:
Learn more about the signs of addiction in teens abusing bath salts.
What kind treatment therapies are used to help those addicted to bath salts.
Understanding withdrawal from bath salts.
Why call us?

A fairly new category of drugs marketed as bath salts are not actually crystals that are placed in a bathtub. Instead, these are drugs that are being snorted, smoked, swallowed, or injected for a “high.”

Available in powdered, crystalline, tablet, or capsule form, bath salts are sold in brightly colored packaging under names like “research chemicals,” “plant food,” and “jewelry cleaner.” These packages are often labeled with terms like “not for human consumption,” and they are found on the shelves of music stores, head shops, and gas stations. They can also be ordered online.

Due to the false labeling of bath salts, many myths exist regarding their use. Since bath salts can be bought over the counter, people may think they are safer than illegal drugs; however, this is not true. The fact is that bath salts are synthetic cathinones, which are stimulant drugs that raise a person’s heart rate, body temperature, blood pressure, and respiration rate while increasing energy levels, sociability, excitement, focus, and pleasure. In addition, these drugs reduce desire to sleep and eat.

Bath salts usually contain amphetamine-like stimulants, such as mephedrone, methylone, or MDPV (3,4 methylenedioxypyrovalerone). Due to their potentially dangerous side effects when abused, the Drug Enforcement Administration (DEA) placed these synthetic stimulants under federal control in 2011, classifying them as Schedule I, meaning that they are illegal to possess or sell and indicating their high abuse potential and lack of accepted medicinal usage. Even though the three most commonly used chemicals in bath salts may be illegal, drug manufacturers are finding ways around this by altering the chemical compounds of their synthetic cathinones just enough to escape regulation and control. This means that many of these products may still be legal and accessible to recreational drug users.

In 2014, the American Association of Poison Control Centers (AAPCC) reported over 500 exposures to bath salts, citing that these products may cause a dangerous spike in heart rate or blood pressure as well as paranoia, hallucinations, delusions, violence, suicidal tendencies, seizures, panic attacks, chest pain, and nausea and vomiting. Individuals taking bath salts may not even be aware of what the drugs actually contain, as these products are synthesized in illicit laboratories and often “cut” with a variety of chemicals or potential toxins. 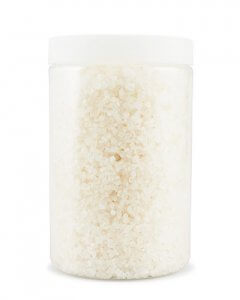 Bath salts appeal to teens and young adults seeking a cheap and “legal” high. These drugs may be commonly doled out at clubs or raves for increased energy and wakefulness, making them popular with the younger population. The DEA reports that users of bath salts are typically teenagers, young adults, and college students. The journal Addiction Science & Clinical Practice publishes that while abuse of designer drugs has been seen in people of various ages, it is most common in males in their mid to late 20s.

Since the chemical makeup of recreationally abused bath salts is constantly changing, many of these drugs may not appear on traditional drug tests or toxicology screens, which may also be appealing to users.

The stimulating effects of bath salts may be desirable for their ability to decrease a person’s inhibitions and provide a euphoric effect. Although these drugs may mimic the effects of the naturally occurring khat plant, they are man-made substances with numerous potential adverse and unknown interactions in the body and brain.

The journal Pharmacy & Therapeutics (P&T) reported that as many as 40 percent of those who sought emergency department treatment for a negative reaction to bath salt abuse suffered from psychotic symptoms, including attempts to harm themselves or others. MDPV, one of the more popular synthetic cathinones found in bath salts, may be up to 10 times more powerful than the illegal stimulant drug cocaine, the National Institute on Drug Abuse (NIDA) publishes. 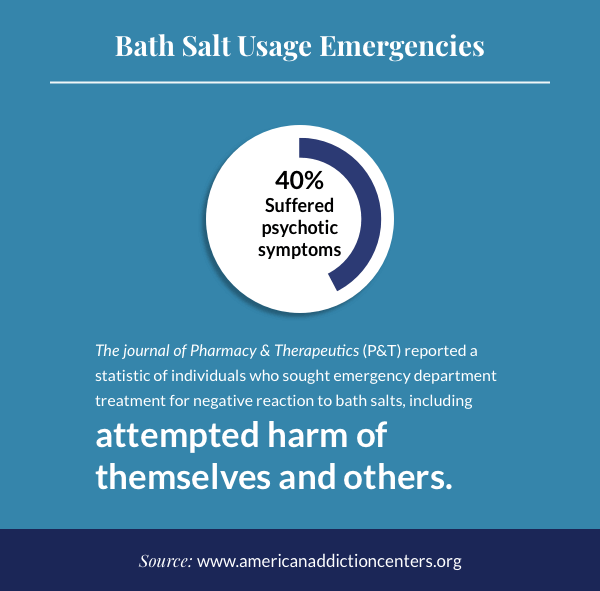 Signs of Addiction to Bath Salts

Synthetic cathinones, like many other psychoactive drugs, interfere with the production of the neurotransmitter dopamine and its absorption back into the brain, thus increasing their addiction potential, Science News reports. Dopamine is one of the chemical messengers in the brain that tells a person when to feel happy as the result of pleasurable stimuli. Stimulant drugs like bath salts interfere with this natural process by artificially stimulating dopamine’s production and by preventing it from being naturally reabsorbed back into its receptors, both of which can result in large amounts of dopamine flooding the brain. This is partially what contributes to the “high” that people experience when abusing bath salts and may encourage users to want to recreate this feeling by taking these drugs again and again.

Regular abuse of stimulant drugs may damage the reward circuitry in the brain, as dopamine levels will drop without the drug’s presence. A dependence on these drugs may occur then, as individuals may be unable to feel pleasure without them. As a result, users may experience drug cravings and withdrawal symptoms that include depression, anxiety, irritability, restlessness, insomnia, suicidal thoughts, and mood swings.

Continued abuse of bath salts can cause people to lose control over their drug use, and they may be unable to stop using drugs despite desire or attempts to do so. Recreational and social activities that are not related to obtaining, using, or recovering from drug use may be discontinued. Familial, school, and occupational responsibilities may be neglected. Grades may slip, and job production may suffer. Those suffering from addiction may keep using bath salts even though they understand the risks and potential consequences of doing so, as their drug use becomes compulsive and out of their control

Aside from the behavioral and social changes that can occur as the result of drug addiction, physical changes may be noticeable too. Sleep patterns may be completely out of whack as bath salts can keep an individual awake for hours. When the drugs wear off, a crash may occur, and individuals may sleep for long periods of time. Appetites are also affected by bath salt abuse, and those battling addiction may have a significant drop in weight and appear anorexic or sickly. Nosebleeds, an irregular heart rate, paranoia, increased sex drive, distortions of reality, dehydration, tremors, and kidney failure may be other physical signs of regular use or addiction to bath salts, NIDA reports.


Find Rehab for Bath Salts Near Me

Bath salts are considered powerful stimulant drugs that can cause significant physical dependence and intense emotional withdrawal symptoms. While NIDA reports that there are no accepted medical treatments for addiction to synthetic cathinones, the journal P & T reports that some medications may be useful in controlling specific symptoms of bath salt intoxication and withdrawal. For instance, benzodiazepines or antipsychotic medications may be used to control seizures and other adverse side effects of bath salt abuse or withdrawal. During medical detox, antidepressant or anti-anxiety medications may be helpful to manage emotional withdrawal symptoms as well.

There is no hard-and-fast rule for the exact duration of detox, as the timeline depends on many factors. It is largely influenced by a person’s level of dependence. Family history of addiction, other additional medical or mental health disorders, stress levels, and other environmental factors all affect the detox and withdrawal timeline. As a general rule, detox is typically a short-term treatment, lasting a few days to a week, and it should be followed with a more complete treatment program.

Editorial Staff
Author
The editorial staff of American Addiction Centers is made up of credentialed clinical reviewers with hands-on experience in or expert knowledge of ad … Read More
Read Our Editorial Policy
Related Topics
Related Tags
dissociatives
synthetic
Don’t wait. Call us now.
Our admissions navigators are available to help 24/7 to discuss treatment.
Why call us?
Get addiction help now (24/7 helpline)We’re here for you every step of the way.