The United States has the unenviable reputation for being the “incarceration nation,” the country that holds 25 percent of the prisoners in the world but only 5 percent of the general population of the world. While the causes of what led to this situation are hotly debated, the corrections officers who watch over these prisoners face traumatizing, life-or-death challenges that often go unnoticed and ignored, which can result in substance abuse and suicide. 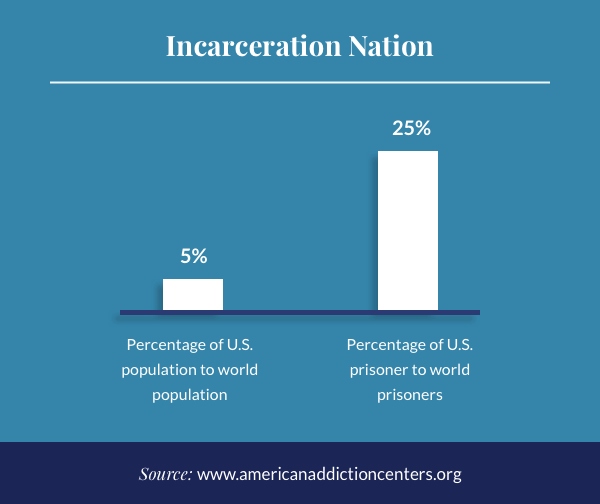 If you’re a corrections officer in need of help, CALL our 24/7 Confidential Toll-free Number

Our compassionate Treatment Counselors are always available to assist you.

What Do Corrections Officers Do?

Understanding the scope of the situation means understanding what corrections officers are required to do as part of their job. In local jails, state prisons, and federal penitentiaries, correctional officers represent authority while looking after prisoners. This entails breaking up fights, ensuring that inmates follow the rules, and working with cooperating inmates in rehabilitation and “good behavior” programs. There are close to 500,000 men and women serving as correctional officers across the country.

For a corrections officer (also known as COs), everything they do is dictated by safety: their own safety, the safety of their colleagues, and the safety of the inmates they watch. To this effect, officers are required to complete training programs that cover the proper use of firearms, hand-to-hand combat, and the use of non-lethal weapons, like tasers, pepper spray, and batons. COs have to be in peak physical condition in order to survive and continue to function in the event of an attack.

It’s not just muscle. Officers have to be very observant, looking for signs of something amiss among a population of criminals and people who are generally hostile toward law enforcement and authority. Nonetheless, COs have to be able to foster working relationships with inmates, for the safety of the guards and inmates, and help inmates who are in trouble; recognizing the red flags of an emotional or mental problem can be the key to defusing a situation before it gets violent.

As much as guards are responsible for keeping prisons safe, they are also tasked with keeping the prisoners themselves safe. Jails and prisons are harsh, unforgiving environments, which often contribute to feelings of depression and anger. Correctional officers are trained to notify mental health counselors, or even intervene themselves, if they feel that an inmate’s mental health is deteriorating.

Part of this line of work may entail separating prison populations, to ensure that high-risk inmates are protected from those who may seek to assault, persecute, or even kill such prisoners. This could entail preventing certain members of the prison population (for example, rival gang members) from using common areas at the same time.

Today, correctional officers are expected to play a more hands-on role with the inmates in their charge. As much as the job entails keeping an eye on prisoners, COs are trained and empowered to offer on-the-spot (and limited) mental health treatment, to be involved in job skills development programs, religious rituals, and substance abuse interventions. Since inmates who participate in these programs have a greater chance of living productive and peaceful lives upon their release, more and more correctional departments across the country are investing time and training for their officers to know how to respond in appropriate situations.

The key is to build working relationships with the inmates who are the most eager to have a better future outside prison, so correctional officers will work extra hard to meet those prisoners halfway.

This may mean that COs liaise with job placement, housing, and substance abuse rehabilitation agencies in the community, sometimes in their professional capacity as employees of state and local criminal justice departments.

The theory of the job is commendable, but the reality on the ground is starkly different. The Guardian writes of the unofficial motto that exists among COs across America: “Prison guards can never be weak.” Figures are not easy to come by, but for the half-million officers who work in prisons, there are over 2.5 million prisoners to watch. Guards are exhausted, traumatized, and often ignored or shunned if they express any weariness or misgivings about the work they are required to do.

As a result, COs have rates of post-traumatic stress disorder that are more than double the rate that military veterans experience. This, in turn, affects prisoners; guards have been known to take their frustrations and anxieties out on inmates, incurring penalties that contribute to their mental health problems. 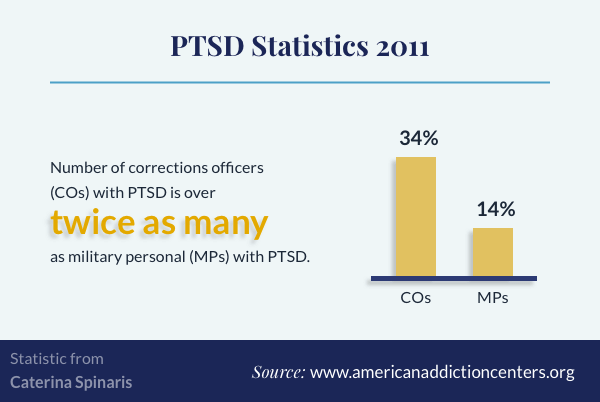 In 2011, Caterina Spinaris, an expert in clinical research on correctional policy issues, conducted an anonymous survey of COs, looking specifically for the signs of post-traumatic stress disorder: flashbacks, hypervigilance, suicidal thoughts, depression, and intrusive thoughts, among other symptoms. Spinaris found that 34 percent of corrections officers met the criteria for PTSD; by comparison, 14 percent of military veterans experience those symptoms.

When it came to suicide, COs take their own lives at a rate of twice that of both police officers and the general public. A national study published in the Archives of Suicide Research found that the risk of suicide among correctional officers was 39 percent higher than all other professions put together.

Michael Van Patten, one of the officers profiled by The Guardian, said that most of his job was “pretty mundane” – cell counts, watching what inmates are doing, even getting inmates extra toilet paper. This can go on for as long as 16 straight hours, sometimes without breaking for lunch. Such activities can account for 95 percent of the job.

What happens in the other 5 percent is what scars many officers: breaking up fights between inmates who are using smuggled weapons or their bare hands to try and kill each other; trying to stop suicide attempts and cleaning up an inmate’s cell after a successful attempt; and coming home with blood or human excrement smeared all over their uniform. 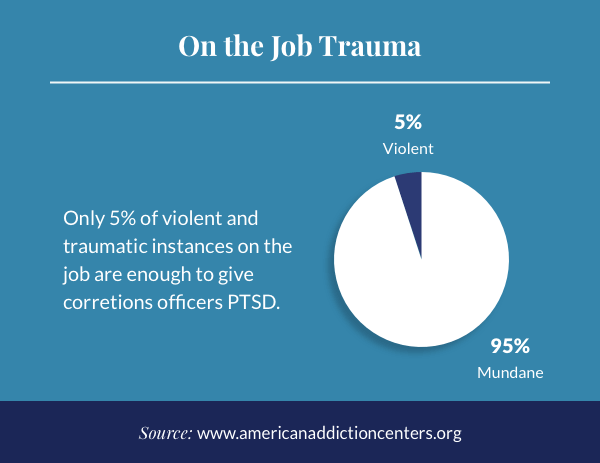 The worst part, said Van Patten, is that officers don’t know when the violence and intensity of that 5 percent will happen. This leads to guards being in a constant state of hypervigilance, a switch that they cannot simply turn off when they go home for the day. The high blood pressure from the “constant state of fight or flight,” in the words of the co-founder of the American Correctional Officer Intelligence Network, leads to heart attacks, ulcers, and reduced life expectancy.

On the face of it, the COs have control of the prison, but if the inmates wanted to, “they could take it.” Never knowing when that moment will come is akin to the environment that leads to PTSD in combat veterans; it is also similar to why women (and men) who have survived sexual assault develop PTSD, because they never know if they are really safe. For that reason, COs go into “battle mode” the second they enter a prison. Michael Morgan, a former officer at a state penitentiary in Oregon, described the experience to The Guardian like a soldier getting ready for war. For an eight-hour shift, anything can happen, and correctional officers have to be ready every second of those eight hours.

An environment like that is not conducive to dealing with the strain in a healthy manner. Officers are expected to process the trauma and swallow it as part of the job. There is an image to maintain, both for the benefit of the inmates, the general public, and other COs. Showing weakness could be the end of a career; it could also mean an opening for a hostile inmate to attack. As a result, COs often become more aggressive and withdrawn after spending enough time on the job. The warden at a correctional facility in Long Island says that officers become “robotic, emotionless,” both because of what the job did to them and also to protect themselves when they came to work.

When the warden first started, guards came to work drunk. Things have improved enough where that is a rarity, but many COs still use drugs and alcohol to get through the dehumanization of what their job does to them.

Editorial Staff
Author
The editorial staff of American Addiction Centers is made up of credentialed clinical reviewers with hands-on experience in or expert knowledge of ad … Read More
Read Our Editorial Policy
Related Topics
Related Tags
treatment
Don’t wait. Call us now.
Our admissions navigators are available to help 24/7 to discuss treatment.
Get addiction help now (24/7 helpline)We’re here for you every step of the way.