The Truth about Gateway Drugs and Addiction 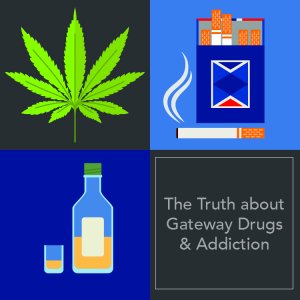 According to Stages and Pathways of Drug Involvement: Examining the Gateway Hypothesis, the gateway theory of substance abuse is the idea that use of one particular substance will lead individuals to subsequently be at a greater risk to abuse other substances. The idea was extremely popular in the 1970s and 1980s when the term gateway theory was coined in order to bring attention to the so-called War on Drugs and to single out specific drugs like marijuana as dangerous substances. Recently, with the legalization of cannabis products in a number of states for medicinal uses and even for recreational purposes, a number of politicians have been voicing their disapproval of the new legislation referring back to the gateway hypothesis.

How Would a Gateway Hypothesis Work?

The supporters of the gateway hypothesis for drug abuse point to basically two overarching conditions that could result in certain types of substances making individuals more vulnerable to abusing other substances. The concepts are often divided but are not mutually exclusive.

Tobacco shares a number of close associations with the use and abuse of other drugs. According to the National Institute on Drug Abuse (NIDA), tobacco use is the leading cause of death and disability in the United States. A number of studies have indicated that individuals who begin using tobacco products earlier in life will often develop other issues with substance use and abuse, including to substances like alcohol, marijuana, cocaine, heroin, etc.

Like nicotine, alcohol is also often referred to as a gateway drug. A number of studies suggest this possibility.

The substance that is most often accused of being a gateway drug is marijuana. A large number of research studies suggest that individuals who abuse other substances at least tried marijuana initially.

Is the Gateway Theory Valid?

Despite the large body of evidence that indicates that animals and even humans who use certain drugs, such as alcohol, tobacco, or marijuana, also abuse other drugs later, the gateway theory is hotly contested among researchers and clinicians. According to a number of sources, including The Everything Guide to the Human Brain, many of the issues with the gateway theory are related to a number of methodological limitations of the research that supports it.

There is evidence that using some substances early in development does result in a greater probability that an individual will abuse other substances; however, the reason for this is not well understood. This condition may represent some combination of inherent factors (e.g., genetic) and the interaction of environmental factors (e.g., peers, learning, stress, etc.).

The relationship between early alcohol use and later use of other drugs has the strongest evidence to suggest that it may be a gateway drug; however, the gateway theory suffers from a number of potential methodological flaws. At the current time, it is unable to specify a causal relationship between early use of any drug and the potential to use or abuse other drugs later. Instead, these relationships may be more consistent with the common liability model.

Editorial Staff
Author, American Addiction Centers
The editorial staff of American Addiction Centers is made up of credentialed clinical reviewers with hands-on experience in or expert knowledge of addiction treatment. Read More
Read Our Editorial Policies
Related Topics
Don’t wait. Call us now.
Our admissions navigators are available to help 24/7 to discuss treatment.
Why call us?
Get addiction help now (24/7 helpline)We’re here for you every step of the way.
;