Signs of a Cannabis Use Disorder

Cannabis use disorder (CUD) is a diagnosis given for mild, moderate, or severe issues with marijauan use.

In order to be diagnosed with a cannabis use disorder, a person must manifest at least two of the 11 symptoms that the DSM-5 sets forth, and they must occur in the same 12-month period. The number of symptoms determines whether a person is diagnosed with a mild, moderate, or severe cannabis use disorder. For people concerned about their own marijuana use, or for those concerned about someone else’s use, these 11 criteria can be thought of signs to watch for. The 11 criteria, paraphrased, are as follows:

As the 11 listed symptoms reflect, there is a physical and biological component to cannabis use disorder. A concerned person may see a symptom emerge, but not know where it places within the progression from recreational use to abuse to a cannabis use disorder. But the important thing is recognizing that the person may be increasingly sliding down the slippery slope from smoking marijuana to “have fun” to abusing it out of necessity and familiarity. The person may not realize that the use has been problematic, or even clinically significant. For this reason, it is especially helpful to know some additional signs associated with marijuana abuse.

Contrary to many reports, marijuana is an addictive drug. Signs that a person is abusing marijuana may be evident to loved ones. Signs of abuse relate to the psychological, physical, and behavioral changes in the person who is abusing marijuana. The following are some of the most commonly observed signs:

Research shows that approximately 30 percent of individuals who abuse marijuana have a problematic relationship with it. When the marijuana abuse stops, or the familiar amount is reduced, a person may notice signs of withdrawal, including difficulty sleeping, nightmares, appearing and/or sounding depressed, and/or demonstrating an urge to use marijuana again. 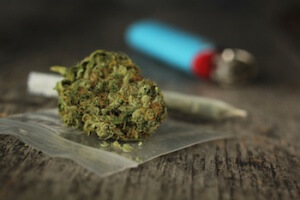 It comes as no surprise that the 2014 National Survey on Drug Use and Health found that marijuana is the most commonly used illicit drug in America. In 2014, there were 22.2 million Americans in the 12+ age group who used marijuana in the 30 days prior to the survey. Many movies and songs portray what it’s like to be high on marijuana, but there still may be little general recognition of the signs of marijuana abuse.

From a clinical standpoint, the terms physical dependence and addiction have been replaced with substance use disorder. This new term comes directly from the Diagnostic and Statistical Manual of Mental Disorders, 5th edition (DSM-5). In addition to a general substance use disorder category, the DSM-5 has diagnostic categories for nine drugs of abuse, including cannabis use disorder. Cannabis, also known as THC, is the main psychoactive chemical in marijuana, hash oil, and hashish.

As noted, two or more of the 11 criteria for cannabis use disorder must occur within a 12-month period. The DSM-5 does not base a diagnosis on the side effects that occur immediately after using marijuana, but these side effects can tip a person off to another’s marijuana use.

Per Mayo Clinic, the following is a list of physical and psychological symptoms as well as signs of recent use of marijuana:

Marijuana use is also associated with a host of long-term side effects that include mental dullness, poor work or school performance, social withdrawal, and lack of interests. Again, people may become aware of another’s marijuana abuse, or the extent of their own, at different times. At some point, some people who use marijuana may awaken to the fact that they have an addictive relationship with this drug. Or they may not be able to maintain the illusion that they have full control over their marijuana abuse when they experience trouble with cognitive tasks, such as problem-solving. However uncomfortable the recognition of a cannabis use disorder may be, it is helpful to keep in mind that recovery is always possible.

A fair amount of the literature available on the detection of marijuana abuse targets concerned parents; however, the advice can apply with equal force to anyone. The behavioral signs of marijuana abuse may be observed at home, in public, during social or family functions, at work, or at school. For individuals who live with a person whom they suspect is abusing marijuana, the following potential signs of abuse may be helpful:

When people develop a cannabis use disorder, there will naturally be a concomitant shift in their behavior. As use of marijuana takes firmer root, the individual will need to increasingly cater to it, which takes time, money, and effort. As a result, a host of behavioral changes may be observed. Notes Medical News Today, the following are some telltale behavioral signs of substance abuse:

Behavioral signs can emerge at any point with continued marijuana abuse. They provide a significant tipoff to a problem and can be the catalyst needed to start a conversation about the abuse or to seek professional help. Marijuana abuse may be occurring at the same time as abuse of other drugs (polydrug abuse). When people seek treatment at a rehab center, they typically identify a primary drug of abuse that needs treatment; however, a team of addiction specialist will address all the drugs of abuse involved.

Editorial Staff
Author, American Addiction Centers
The editorial staff of American Addiction Centers is made up of credentialed clinical reviewers with hands-on experience in or expert knowledge of addiction treatment. Read More
Read Our Editorial Policies
Related Topics
Related Tags
Marijuana
Don’t wait. Call us now.
Our admissions navigators are available to help 24/7 to discuss treatment.
Why call us?
Get addiction help now (24/7 helpline)We’re here for you every step of the way.
;