Also known as dysthymia, persistent depressive disorder (PDD), is nested under the umbrella of depressive disorders in the Diagnostic and Statistical Manual of Mental Disorders, Fifth Edition (DSM-5). Major depressive disorder (MDD) and PDD can have some similar symptoms such as feelings of hopelessness, lethargy, sleep changes, appetite changes, and problems concentrating.1 However, the prolonged symptoms are the key feature differentiating dysthymia from major depression. Dysthymia is marked by the presence of symptoms most of the time for at least 2 years (1 year or longer in children and adolescents).1 Many people who suffer from this disorder experience symptoms for longer.2 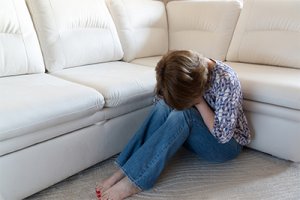 This disorder is more than just having a bad day or feeling sad from time to time. It is consistently struggling with depressive symptoms, though symptoms may be less acute or severe than those of major depressive disorder.3 While the symptoms may ebb and flow, they are never gone for longer than 2 months.1

Persistent depressive disorder tends to begin early (in childhood, adolescence, or early adulthood) and subtly, so it often is not recognized as a mental illness and may feel “normal” to the person. They may simply describe their day-to-day mood as “sad” or “down”. As such, they may not realize they have a diagnosable disorder that can be treated.1 ,2

For a diagnosis of dysthymia to be made, the person must suffer from a depressed mood most of the day, more days than not, for at least 2 years* AND have 2 or more of the following symptoms while depressed:1

*Children and adolescents have more flexible diagnostic criteria. They can have an irritable mood or a depressed mood, and their symptoms only need to be present for one year or longer.1

For a diagnosis of PDD, the symptoms cannot be better explained by another mental illness (with the exception that criteria can also be met for major depression for some or all of the duration of dysthymia) and cannot be due to any substance or underlying medical illness.1

Finally, for a diagnosis to be made, the symptoms must cause significant distress or impairment of a person’s functioning in major areas of their life, such as at work or in relationships, and the symptoms never disappear entirely for any period of time longer than 2 months during the disturbance.1

PDD may involve episodes where the symptoms meet the criteria for major depression.1  In fact, it is estimated that approximately three-quarters of people with dysthymia have at least one of these episodes.4

When these major depressive episodes occur, this is sometimes called “double depression”. Once the episode ends, most individuals will not be free from symptoms but rather return to their typical dysthymic state.2

Using results from the National Comorbidity Survey Replication (NCS-R), a 2005 study found that 2.5% of those who were surveyed suffered from dysthymia at some point during their lifetime.5

Of those who responded to the survey who had dysthymia, nearly 50% were categorized by researchers as “serious”, based on certain indicators. Approximately 32% were classified as “moderate,” while only about 18% were deemed “mild.”6

Individuals suffering from PDD may exhibit problems in school or at work due to an inability to concentrate or get enough sleep. They may not eat enough or eat too much and, as a result, gain or lose a significant amount of weight. They may also be too lethargic to perform necessary daily activities.1

People who develop PDD early on, when they are a child or adolescent, may also confuse their mood symptoms for characteristics of their personality, which may keep them from getting the help they need.3

One possible complication that may be associated with PDD is substance abuse. People with PDD may have thoughts of harming themselves and may attempt suicide.7

Dysthymia may also be associated with:3,7

According to the DSM-5, the effects of PDD on an individual’s functioning may vary among individuals but may be as severe or even more severe than those of major depressive disorder.

For those who have dealt with depressive symptoms for many years, a sense of hopelessness about treatment may set in.

If you have tried a certain type of treatment or a specific therapist and have not noticed an improvement, it doesn’t mean treatment won’t work for you.

The National Alliance on Mental Illness states you may need to try out different therapists and/or other mental health providers until you find one (or more) that meets your needs.2  If you have not yet tried medication, that may also be an approach to look into. The best treatment may be a combination of therapy and medication, as they are thought to be more effective together than either alone.8

Cognitive behavioral therapy (CBT) is one form of therapy that research has shown to be effective for people struggling with PDD.9 CBT helps individuals identify their self-defeating thoughts and behavior patterns and change them to healthier ones.10 In CBT, the individual will work with their therapist to identify problems, as well as to anticipate problems that are likely to arise, and learn skills to address those problems.11

Insight-oriented therapy can help people with PDD understand what may be influencing their depressive symptoms.12 A greater understanding of what leads to distressing thoughts and feelings may help the individual begin to work through them.

Medications that may be effective for the mitigation of PDD symptoms include:13

One review study found that about 55% of individuals with dysthymia who took any antidepressant had a response. In contrast, only 31% of those who took a placebo had a response. Another review indicated that SSRIs, TCAs, and MAOIs were all equally effective for treating dysthymia, but that SSRIs may be more tolerable. SSRIs are the most common medication used for dysthymia, probably because they are safer than MAOIs and TCAs and have less significant side effects.13

Some studies have shown that individuals younger than 25 years old who take antidepressants, such as SSRIs or SNRIs, have an increased risk of suicidal thoughts and actions.15 Young people on an antidepressant regimen should have close monitoring by their health care provider, and their loved ones should also watch them closely for any concerning changes. If needed, the medication may be discontinued and a new approach planned. However, for many youths, antidepressants effectively treat depression and other mental illnesses, and untreated depression can be dangerous. Therefore, the health care provider should discuss the pros and cons of using an antidepressant with the patient and, if appropriate, the patient’s guardian(s), so that they can together decide if that patient should be started on an antidepressant.16

The two primary treatments for PDD are medication and psychotherapy, and anyone who thinks they may have persistent depressive disorder should seek professional treatment. In addition, there are a number of complementary approaches that can help to alleviate symptoms.7 The U.S. National Library of Medicine suggests:12

The National Institute on Drug Abuse states that those who suffer from a mood disorder or an anxiety disorder are approximately two times as likely to also have a co-occurring drug use disorder.17 Up to half of all individuals with dysthymic disorder suffer from comorbid substance abuse.3

Individuals who suffer from dysthymia may try to self-medicate with alcohol and other substances to attempt to alleviate their feelings of sadness, hopelessness, or lethargy. However, while this may provide some relief initially, it can worsen their moods over time and it can impair judgment.12 Self-medicating may also lead to the development of a substance use disorder.18

Signs of a substance use disorder include:1

While depression raises the risk of substance use disorders, the opposite is also true. Abusing substances may “unmask” or worsen depressive symptoms. In vulnerable individuals who already have abnormalities in their neurotransmitter systems or signaling pathways in their brains, drugs may worsen these and bring about an increase in the severity of mood-related symptoms.19

Because either disorder can worsen the other, treatment should address both conditions.20

Those seeking treatment for drug or alcohol addiction who also suffer from a mood disorder or another mental illness should consider programs that offer integrated treatment for co-occurring disorders, sometimes referred to as dual diagnosis treatment. Only focusing on the substance addiction and not treating the mood disorder, for example, may result in relapse if substance use was a coping mechanism used by that individual for their depressive symptoms.20

Residential treatment typically provides 24-hour care in a supportive environment. Those with significant needs may require a medically monitored intensive inpatient program, where there is 24-hour nursing care and physicians are available if needed.22 Since clients have 24-hour care, the chances of relapse are reduced.

If a person is physically dependent on their substance of use, an initial detoxification program can manage their withdrawal. Supervised detox can prevent potentially dangerous complications. It may also involve interventions to increase patient comfort.23 Withdrawal from some substances of abuse, such as alcohol and benzodiazepines, can potentially be life-threatening.24,25 Inpatient medical detox offers 24/7 supervision and support during the withdrawal process.23

Your specific treatment plan may look different and should incorporate your unique needs.

How to Help a Loved One

Speaking to a loved one about mental health can be difficult. Remember that the person may be scared or ashamed and may not know how to ask for help.

If you think a loved one is suffering from persistent depressive disorder, a substance use disorder, or both, you can learn more about these disorders and ways to help via the resources outlined below. If you think your loved one may be a danger to him-/herself or someone else, call 911.

Sophie Stein, MSN
Related Topics
Related Tags
co-occurring-disorders
depression
Don’t wait. Call us now.
Our admissions navigators are available to help 24/7 to discuss treatment.
Why call us?
Get addiction help now (24/7 helpline)We’re here for you every step of the way.