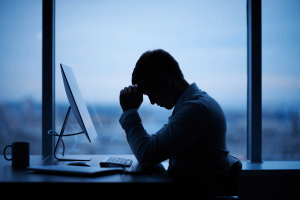 Data shows the rates of alcohol and drug use actually rise with increased levels of income and education.¹ Multiple studies have shown that middle-class people consume more alcohol and illegal drugs than those living below the poverty line.²-³ Alcohol abuse among the middle-class workforce is a major issue that affects both employees and employers. Recent studies have shown that middle-class workers consume more alcohol than other groups within the workforce.4 These workers drink to cope with job-related stress or to overcome negative emotions, but over time alcohol use will lead to compromised health, declined performance, and decreased safety on and off the job.

Chronic stress is a known risk factor for alcohol abuse, and for many workers their job is a constant source of stress day after day.5 Middle-class working professionals are especially at risk of developing alcohol abuse and dependency due to workplace stress. Here are some of the ways stress in the work environment can promote alcohol abuse:

Lack of Control Over Work

Depending on their place within a company, some people may have less influence over their job and the overall workplace environment. Frustration and feelings of meaningless can arise. This can lead to on-the-job boredom and a lack of stimulation. Studies have found that workers with little control over occupational decisions have lower esteem for their profession and are more likely to become problem drinkers.6

Work-Related Exposure to the Public

Work that demands interaction with the public can be a constant source of stress. Daily tasks such as greeting customers, catering to guests, and dealing with client dissatisfaction can easily induce work-related stress, and there is an association between the demands of these jobs and addictive behaviors. A recent study published in the journal PLOS One provides data showing that stress related to exposure to the public (such as customers and guests) during work is associated with increased use of alcohol.7

Exposure to job strain, a form of workplace stress characterized by high job demands and low ability to use skills or make decisions, leads to an increased risk of substance use disorders. Feeling overworked without the ability to reach out to your peers and superiors can sometimes lead to depression in workers. Recent studies have shown that higher job strain is associated with increased alcohol-related disorders in middle-class workers such as bankers.8-9

Middle-class professionals deal with many other stressors in the work environment that can promote unhealthy drinking habits. These include:

Michael Kaliszewski, PhD
Dr. Michael Kaliszewski is a freelance science writer with over 15 years of experience as a research scientist in both academia and industry.
Related Topics
Don’t wait. Call us now.
Our admissions navigators are available to help 24/7 to discuss treatment.
Why call us?