Booze and Snooze: How Does Drinking Affect Sleep?

Are you thinking about having a few drinks before going to sleep? Think again. If you’re looking forward to a restful night, even moderate drinking may undermine those plans. As it turns out, research shows that alcohol negatively affects sleep patterns.

But doesn’t alcohol induce calmness and contentment? Having a couple of drinks to dampen the day’s stresses, alleviate anxiety and relax the brain and body seems like a reasonable late night routine. For these reasons, indulging as such seems like that path to peaceful sleep. Here’s the rub. Although alcohol helps sedate and promotes the feeling of sleepiness, that’s only the front-end of the picture. 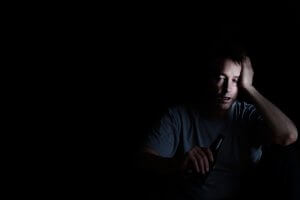 Drinking Alcohol and the Sleep Cycle

Imbibing alcohol prior to bedtime may assist in falling asleep fast or faster than without it – accent on the word “may.” Even if that were the case, after an initial boost to get some shut eye, uninterrupted slumber may be elusive. The basis for this relates to the four normal stages of the sleep cycle, per the Sleep Foundation:

So what is the connection between alcohol and the sleep cycle? Having a few drinks before retiring for the day messes with REM sleep and the stages leading up to it. The liver plays a big role here. Its function in breaking down the alcohol consumed disrupts the balance between slow wave and REM sleep. As a consequence, sleep quality suffers through the night and affects well-being into the next day.

Repeated use of a substance may usher in regular use; and that may generate wants and needs for larger quantities. It has to do with building up a tolerance to the substance and becoming dependent on it. If people rely on drinking alcohol to drift into drowsiness, they may tend to drink increasingly larger amounts to achieve that state. In turn, the more alcohol consumed for that purpose, the more a person will experience fitful sleep, which will play havoc with the following day’s activities. It’s also the recipe for a substance use disorder (SUD).

There’s more to it. As noted, alcohol before bed may help some people fall asleep quickly. It may do the opposite for others or for all some of the time. In short, it may lead to much dreaded insomnia. Harvard Health defines the term as “difficulty in falling asleep.” It doesn’t stop there. Insomnia also takes the form of other sleep abnormalities, such as waking up early or at intervals during the night. “Insomnia of any kind can keep you from feeling rested and refreshed during the day.”

Then there’s sleep apnea. The Sleep Foundation describes it as “a condition marked by abnormal breathing during sleep. People with sleep apnea have multiple extended pauses in breath when they sleep. These temporary breathing lapses cause lower-quality sleep.” Here again, there’s a relationship between pre-bedtime alcohol and this condition. Various studies draw the same conclusion: “consuming alcohol increases the risk of sleep apnea by 25%.”

What are some ways to limit sleep-alcohol problems? The Sleep Foundation recommends:

If you or a loved one is battling substance use disorder, help is available. American Addiction Centers is a trusted source of professional treatment with many options and programs at facilities around the country. Learn more here.

Sherry M. Adler
Author
Sherry M. Adler is a freelance writer based in the Greater New York City area, dedicated to using the power of words to inform and energize people.
Read Our Editorial Policy
Recent Posts
Related Tags
alcohol
mental health
wellness
Don’t wait. Call us now.
Our admissions navigators are available to help 24/7 to discuss treatment.
Prefer texting to talking on the phone? We’ve got you covered 24/7.
Instead, sign up for text support to receive: