The Opioid Epidemic Cost the U.S. Economy $2.5 Trillion in 4 Years

It’s a well-known fact just how much the opioid epidemic has cost us in human life. In just over 20 years, over 700,000 people have died of a drug overdose in the United States. Well over half of these deaths were the result of opioids. Last year alone, there were nearly 70,000 drug overdose deaths, according to recent CDC data, most of which were opioid-related.

Less well-known is the economic toll the opioid epidemic has taken. But a new report from the White House Council of Economic Advisers (CEA) has in fact estimated the monetary damage the epidemic has had over a four-year period. Though obviously not nearly as consequential as the number of lives lost, the dollar amount is still staggering. According to the report, the opioid epidemic cost the economy 2.5 trillion dollars in just a four year period. 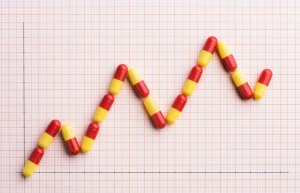 Higher than Other Estimates

The CEA’s report isn’t the first attempt at estimating the cost of the opioid epidemic. For example, in 2017, the healthcare research organization Altarum published a report that estimated the cost for 2016 at $95 billion. The CEA put the number for that year at well over $500 billion for 2016. Similarly, a more comprehensive study done by the Society of Actuaries estimated the cost from 2015 to 2018 as being “only” $631 billion.

The discrepancy comes from the way each organization measures the costs. In particular, the CEA accounts for the value of a statistical life (VSL) whereas other studies do not. The VSL is essentially an economic value that, perhaps quite morbidly, attempts to quantify the economic benefit of preventing any given fatality. According to the CEA, “VSLs are commonly used by regulators for benefit-cost analyses and regulatory impact analyses.”

The CEA further notes that it “prefers this comprehensive measure because the opioid crisis not only increases costs and lowers productivity throughout the economy, it also prematurely ends lives, which have value beyond their effect on economic output.”

A Justification for Spending More to Combat the Opioid Epidemic

Congress has in fact raised funding to address the crisis in the past few years, but the most expansive effort lawmakers have made—the SUPPORT Act in 2018—tallied in at just over $2 billion to be spent over ten years. Meanwhile, experts say that tens of billions of dollars more may be needed to adequately combat the crisis.

The human toll alone should be reason enough to increase spending on the issue. The report provides an extra layer of justification. Spending money now to fight the epidemic would likely actually save money in the long run.