Years of Life Lost to Drugs

For over two decades, the United States has struggled with an opioid epidemic that is continuing to worsen each year. Despite efforts to fight drug abuse, the booming use of fentanyl has only increased the death toll. But overdoses aren’t the only consequence of drug abuse. Many people are living with the physical, mental, and emotional effects of substance use, with the United States leading the world in the number of years of healthy life lost to substance use. 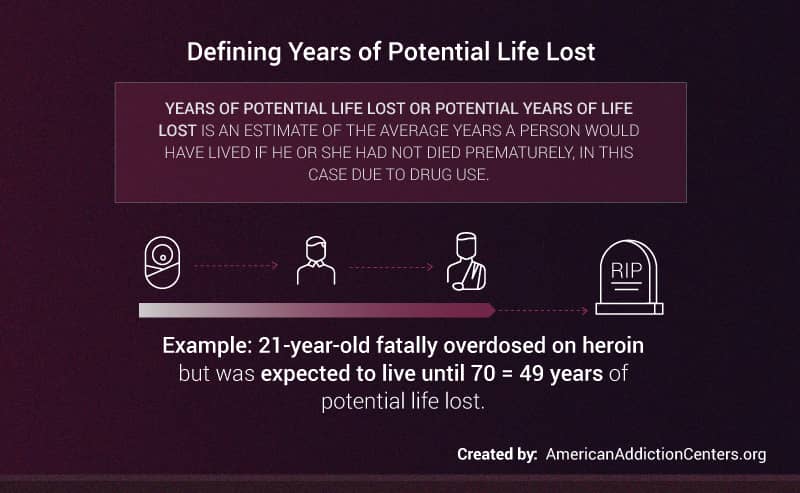 To measure this, the World Health Organization (WHO) calculates the burden of disease through Disability-Adjusted Life Years (DALY) – the number of years of life lost and years lived with a disability. One DALY is equivalent to one lost year of healthy human life. For every 100,000 people in the United States, an average of 1,178 years of healthy life are lost to substance use. 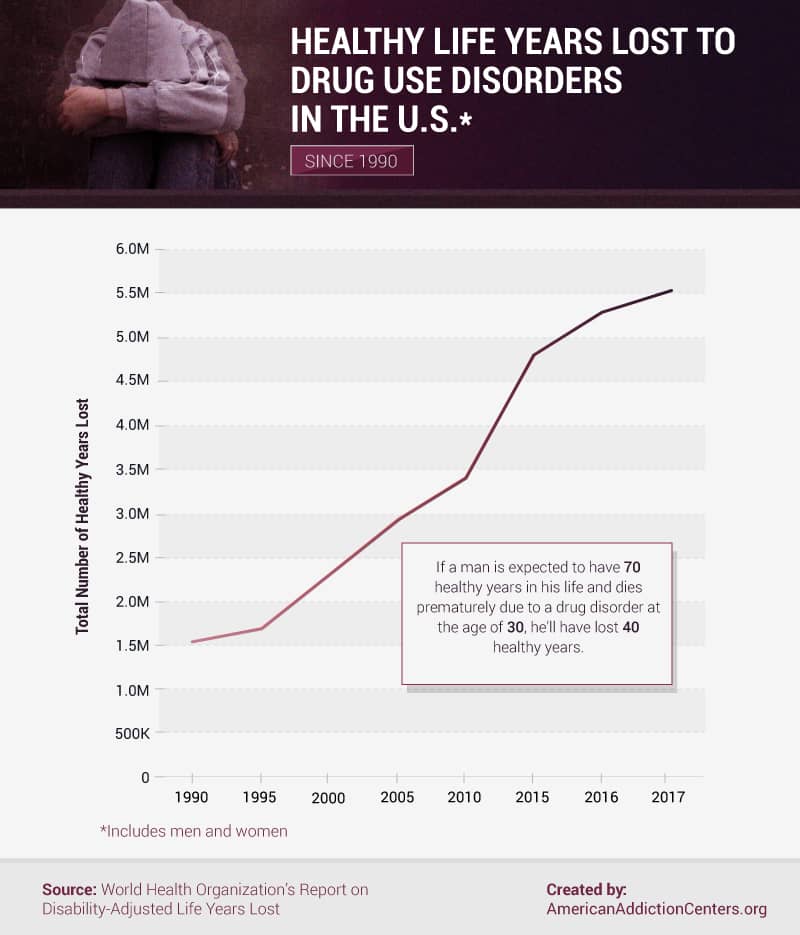 Sacrifices of the Sexes 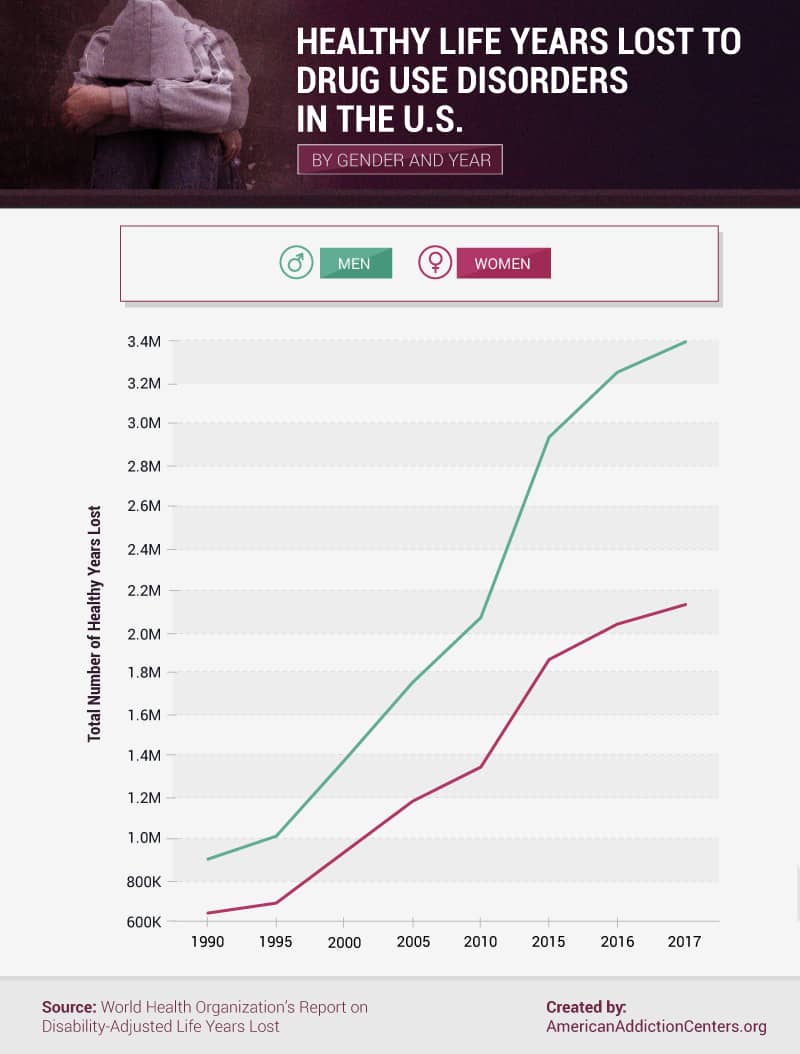 Numerous studies have contradicted each other regarding gender differences in prevalence and susceptibility of substance abuse. While there is no final answer on which gender is more at risk, DALY data show a clear difference in gender when it comes to years of healthy life lost. Since the beginning of data collection in 1990, men have consistently lost more years of life than their female counterparts. In 2017 alone, men lost 3.4 million years of healthy life due to substance abuse disorders compared to women losing closer to a combined 2 million years. 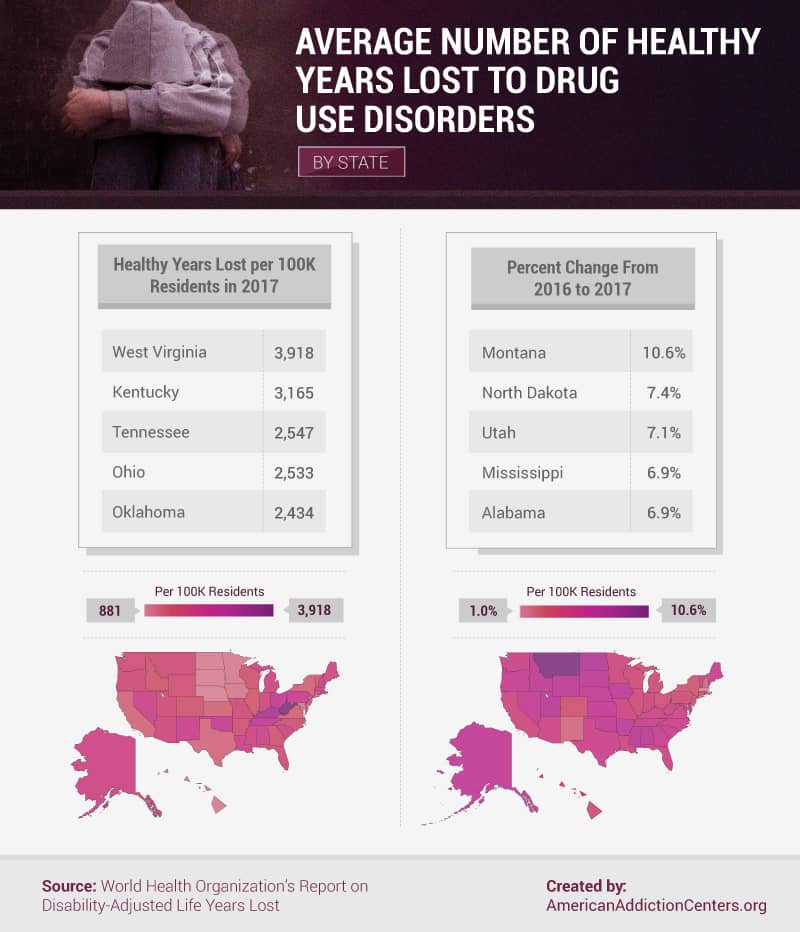 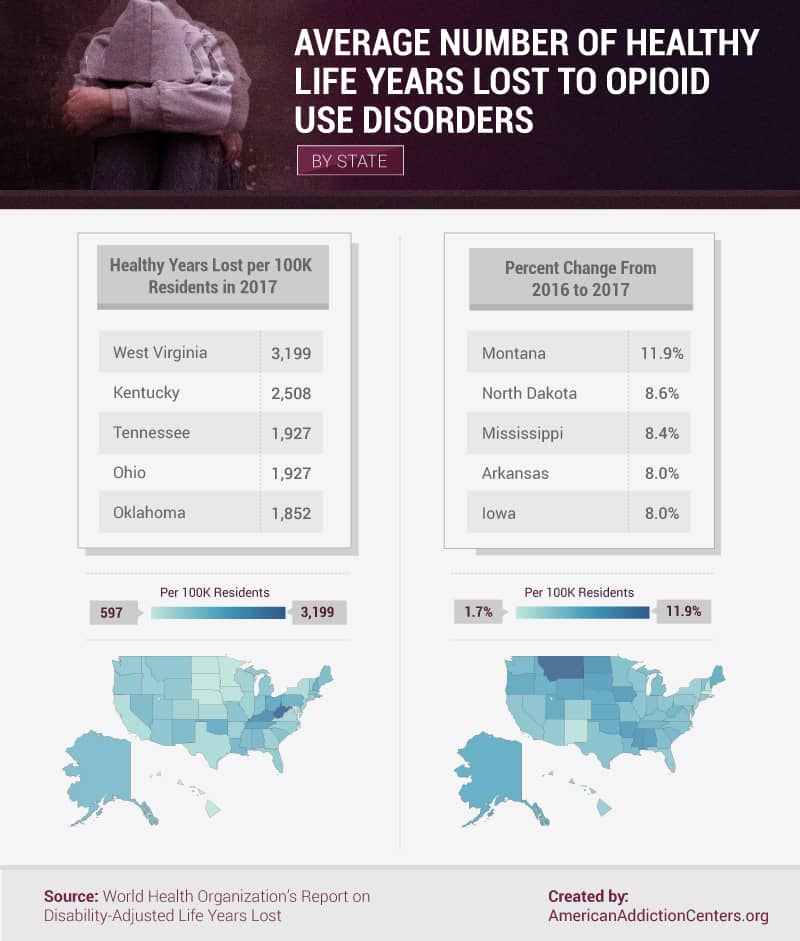 Looking at the percent change in DALY from 2016 to 2017, Montana saw the highest percent increase in healthy years lost to opioid abuse disorders at 11.9 percent. West Virginia topped the charts again, with residents losing an average of 3,199 healthy years for every 100,000 people to opioid use disorders in 2017.

The large number of years of healthy life lost to opioid use disorders in West Virginia is likely a reflection of the high rates of opioid overdoses the state experienced in 2017 alone. The state surpassed 1,000 fatal drug overdoses in 2017, with 86 percent involving an opioid. 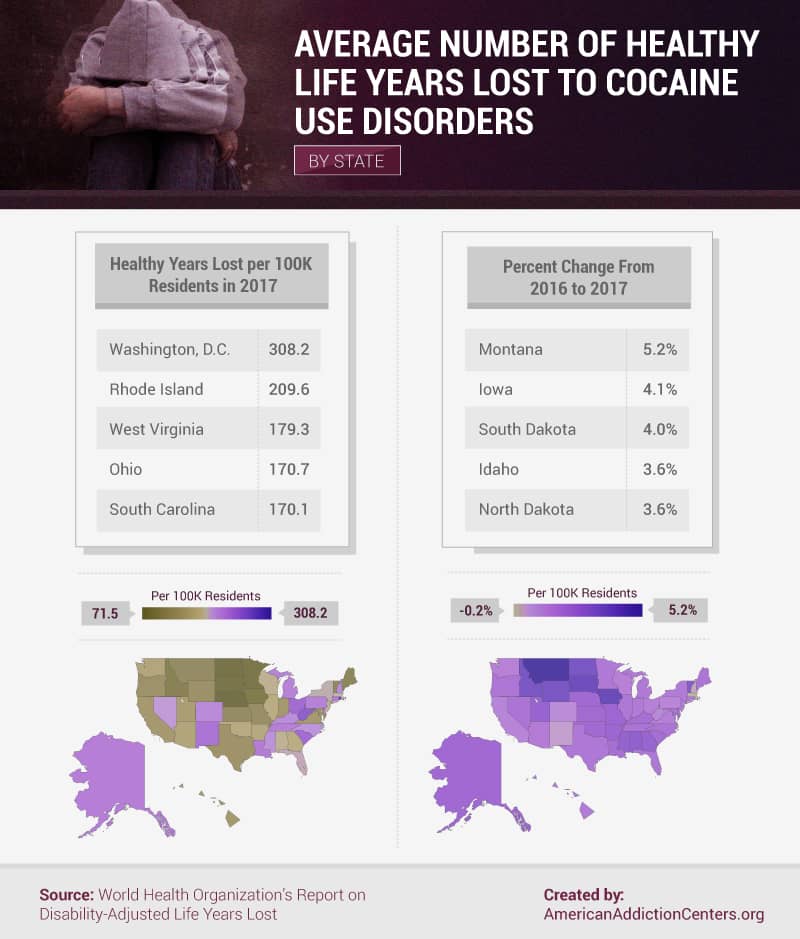 While the opioid epidemic has been at the forefront of American minds regarding drugs, cocaine has slipped by and possibly begun an epidemic of its own. When looking at cocaine, Montana was still the state with the largest percent change in years of healthy life lost, with an increase of 5.2 percent. It is residents of Washington, D.C., however, who lost the most years – per 100,000 residents, 308.2 years of healthy life were lost to cocaine in 2017. 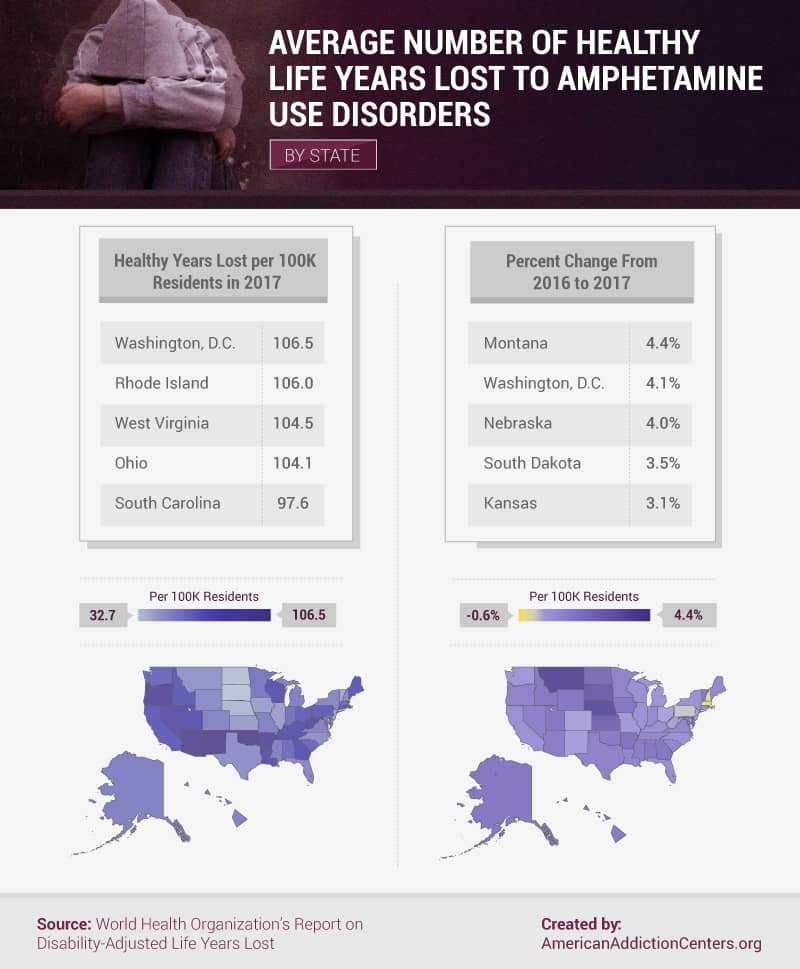 Adderall is a legal drug used to treat attention deficit hyperactivity disorder (ADHD), but when this drug is used for nonmedical purposes, as it often is, it has become known as a “smart drug.” Despite the friendlier term, Adderall is still an amphetamine and can have serious consequences when used without a prescription. Keep in mind, Adderall and methamphetamine are very similar, on a molecular level. However, the slight chemical difference between the two drugs makes methamphetamine much more potent. As a result, the healthy life years lost is likely due to the use of methamphetamines rather than the misuse of Adderall.

Percent change in healthy life years lost wasn’t as drastic when it came to amphetamines compared to other drugs, but Montana remained the state with the largest change. From 2016 to 2017, the number of healthy years lost increased by 4.4 percent for residents of Montana and 4.1 percent for residents of Washington, D.C. Rhode Island residents lost 106 healthy years per 100,000 residents in 2017, just shy of D.C.’s 106.5 years. West Virginia wasn’t far behind, though – per 100,000 residents, West Virginia lost 104.5 healthy years to amphetamines.

Drug use is increasing worldwide, with the United States leading in illegal drug use. When looking at years of healthy life lost around the world, the United States is also the undeniable leader. In the United States, Montana has seen the biggest increase in healthy years lost to numerous drugs between 2016 and 2017, and many states aren’t far behind. Some states have begun the fight against the opioid crisis, targeting the pharmacies who are enabling addiction. But with federal regulation lagging, fighting addiction is often a personal battle.

Addiction doesn’t need to be fought alone, though. At American Addiction Centers, we recognize that addiction to various substances is a disease, and we are here to help you or your loved ones reach recovery. With personalized treatment all over the country, we are committed to helping fight addiction so you can get back to a sober, healthy, and happy life. Visit us online today to learn more.

We collected data from the Global Health Data Exchange for 2016 and 2017. The data collected from the GDB Results Tool revolve around healthy life years lost due to drug disorders. The term “Healthy Life Years Lost” refers to the years of potential life lost or potential years of life lost, as an estimate of the average years a person would have lived if he or she had not died prematurely, in this case, due to drug use. The drug disorders that are presented in this project include opioids, cocaine, and amphetamines.

In this particular study, we chose to exclude marijuana and other drug use disorders.

The metric used in this project, healthy years of life lost, is an estimation of how long a particular person will live. With that being said, there is no way in which someone can calculate the exact life expectancy of another person.

Do you know someone interested in learning more about detrimental drug effects? If so, please direct them to this article. We grant permission to use the graphics and information from this project for non-commercial use. Just don’t forget to link back to this page to give the authors proper credit for their hard work.